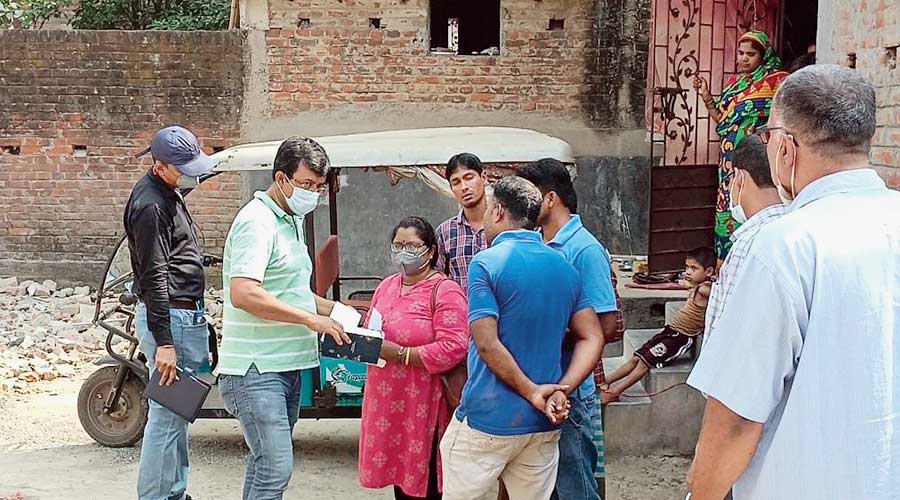 The CBI on Wednesday recorded statements of a few officials of the fire and emergency services department and tallied the same with those of a section of police officers in the Boguti massacre case.

The CBI’s exercise was part of an attempt to understand if the Boguti massacre could have been averted through prompt administrative intervention.

The crosschecking of the statements began two days after the suspended subdivisional police officer of Rampurhat, Sayan Ahmed, apparently told the investigators during his interrogation on Monday that he had had to leave the village on the night of March 21 — when fire tenders were at work — apparently at the behest of one of his superior officers.

Ahmed has been benched after chief minister Mamata Banerjee expressed her anguish over slack policing during and after the alleged carnage at the Bogtui village, on the outskirts of Rampurhat.

The CBI officers questioned some officials of the fire services department to figure out when the first call had logged at the Rampurhat fire station and how many tenders had left for the village following a report of fire.

The FIR drawn up at the Rampurhat police station — which now forms the basis of the CBI probe — says “at about 22.25 hrs, the fire brigade personnel of Rampurhat Fire and Emergency Services arrived at the spot. During fire fighting operations, four people were recovered having burn injuries”.

The CBI wanted to ascertain from the fire department officials whether police or villagers had made the first phone call seeking help and what was the role of the police when the fire tenders had reached the spot.

The fire tenders had left the spot at 2am only to return after a few hours later. The CBI wanted to know who had instructed them to leave the spot in the early hours.

“Was it a superior officer or anyone from the Rampurhat police station? If there were no superior officer around, where was he then? These are some of the questions put before the fire |brigade personnel,” said a source.

“We would want to ascertain whether the SDPO had reached the spot before fire tenders began their operation and in case he had left the spot before the fire was put out, why did he?” added the source.

The CBI had already quizzed SDPO Sayan Ahmed on Monday and the IC Tridip Pramanik on Tuesday. On Wednesday, the CBI summoned the officerincharge of Nalhati police station Manoj Singh and an assistant subinspector of police of Rampurhat Golok Ghosh for hours.

Manoj Singh — the Nalhati OC — was brought to Rampurhat after the murder of Bhadu Sheikh to maintain law and order. Singh went to Bogtui after the carnage to bring the situation under control.

The sleuths want to know from Singh whether he had conveyed the gruesomeness of the incident to his superiors and what their replies and further action were.

A source in Birbhum district police said after the murder of Bhadu Sheikh, an IPS officer from Suri was sent to Rampurhat to monitor the situation. After interrogating the police officers, the CBI has come to know that the SDPO and the IC were asked to check the CCTV footage of Bogtui More to arrest the goons behind the murder of the Trinamul leader.

Sources said there was a meeting with senior police officers in the presence of the IC and the SDPO where a top district police officer rebuked the SDPO harshly for not informing him properly about the incident of arson.

“It appears there was no coordination among police, especially between officers at Rampurhat and Suri, which is the district headquarters,” said a CBI source.

Five small teams of CBI officers, along with jawans of central forces, started raiding houses at Bogtui after they got a few names who were part of a gang of miscreants to resort to violence on March 21 night.

The CBI officials visited the house of Ali Hussein Sheikh — one of the accused in the Bogtui carnage — and asked the family members about his present location.

“The CBI officials asked about my father’s location. My father is a handicapped and innocent. He fled the house in fear,” said Mamata Khatui, daughter of the accused.

Sanju is son of Sona Sheikh, the owner of the house where seven charred bodies were found. Sanju and Sera were named in an FIR. The police got the name of Raja during investigation. The police had on March 22 arrested Hanif Sheikh in connection with the case.

“The trio were produced before the ACJM Souvik Dey who sent them in 10 days’ police custody,” said Surajit Sinha, the assistant public prosecutor of Rampurhat.