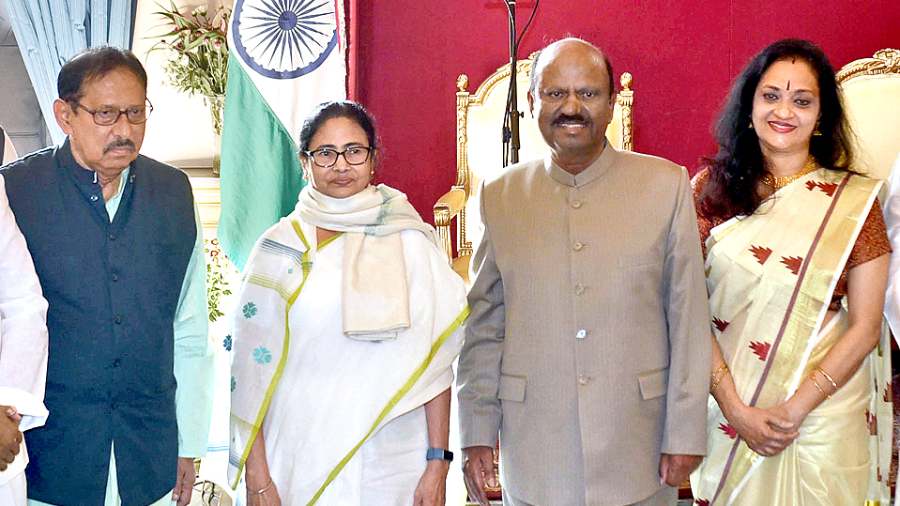 Mamata Banerjee with new governor CV Ananda Bose and his wife at Raj Bhavan on Wednesday.
Picture by Bishwarup Dutta
Our Special Correspondent   |   Calcutta   |   Published 24.11.22, 04:28 AM

The BJP on Wednesday stayed away from C.V. Ananda Bose’s swearing-in as the new Bengal governor over the seating arrangement made by the state administration for the leader of the Opposition, Suvendu Adhikari, at the Raj Bhavan.

A chair was earmarked for Adhikari in the second row where he was to sit next to two BJP turncoats, Krishna Kalyani and Biswajit Das.

The BJP leader took to Twitter to announce his decision of not attending Bose’s oath-taking.

“I won’t be attending the ceremony as it is not possible for me to take a seat next to such objectionable persons,” tweeted Adhikari, making it clear that he didn’t want to sit next to the two MLAs, who had won as BJP candidates and then joined the Trinamul Congress.

Bengal BJP president Sukanta Majumdar, who was also assigned a seat in the second row, returned from the gate of Raj Bhavan after learning about Adhikari’s social media outburst, said a BJP source

The BJP has claimed that as the leader of the Opposition has a rank similar to that of a cabinet minister, Adhikari should have been in the front row, where chief minister Mamata Banerjee was seated next to Assembly Speaker Biman Banerjee and her senior cabinet colleagues like urban development minister Firhad Hakim and power minister Aroop Biswas.

Majumdar retweeted Adhikari’s tweet, making it clear that the BJP had decided to attack Trinamul over the seating arrangement row.

A senior state government official said there were no specific guidelines on seating arrangements at such programmes in Raj Bhavan. He, however, recalled that when Jagdeep Dhankhar was being sworn in as the governor on July 30, 2019, Abdul Mannan, the then leader of the opposition, had been allotted a seat in the front row.

Trinamul said Adhikari’s absence from the swearing-in was politically motivated. Trinamul spokesperson Kunal Ghosh tweeted that Adhikari’s no-show at the programme was “discourteous” and his tweets were “acts of lies”.

Veteran CPM leader Biman Bose, the sole representative of Left parties at the programme, took his seat in the second row after exchanging pleasantries with Trinamul ministers and MPs.

When The Telegraph asked the governor about the absence of the leader of the Opposition from his oath-taking, he smiled and said: “I have become the governor only for a few hours.”

Then, responding to a question on the role he would play as a governor, Ananda Bose said: “Difference of opinion is part of democracy. Different perspectives don’t indicate weakness, rather it’s the strength of democracy.... Given the rich cultural background of Bengal, I think it will be possible to resolve all conflicts.”

Later in the day, Adhikari called on the governor and handed over to him a report prepared by the National Human Rights Commission on the violence after the publication of Assembly results last year.

Incidentally, Bose was a member of a “fact-finding” team sent by the BJP to  Bengal after the violence.