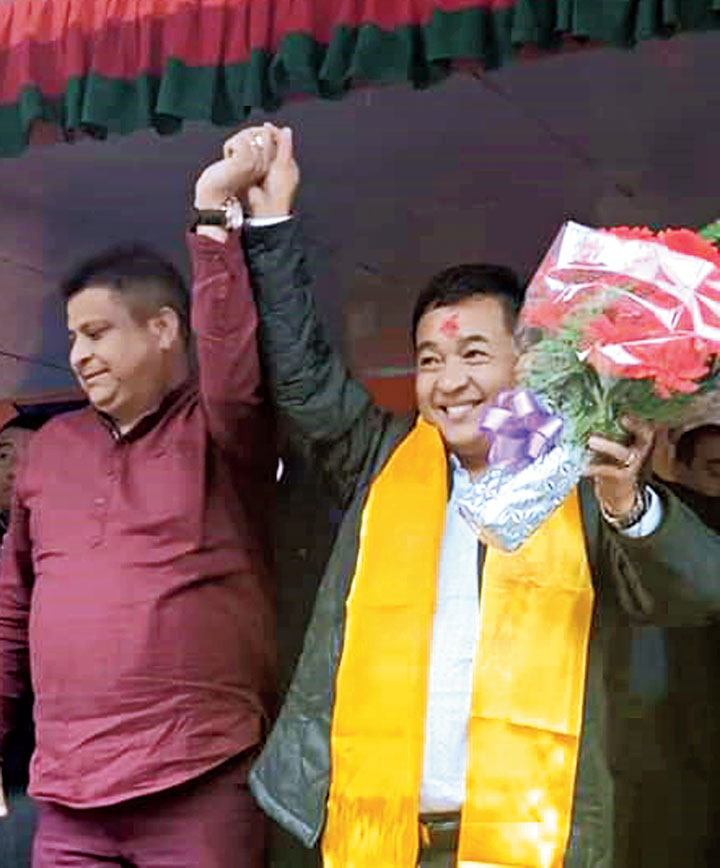 The BJP on Thursday rode piggyback on its ally, the Sikkim Krantikari Morcha (SKM), to establish a toehold in the Himalayan state by winning two of the three Assembly seats where bypolls had been held.

This marks the first electoral success in Sikkim for the BJP, which had got less than 2 per cent of the votes in the Assembly elections held in April.

Despite drawing a blank in the last elections, the BJP had managed to secure a backdoor entry to the Assembly by engineering the defections of 10 MLAs of the Opposition Sikkim Democratic Front (SDF).

With the twin wins, the BJP’s strength in the 32-member Assembly has gone up to 12 while the SKM’s tally stands at 19. Former chief minister Pawan Chamling, who lost his MLAs to both the BJP and the SKM, is the other legislator in the House.

“The BJP is in an alliance with the ruling party…. It is also the second largest party in the state by gobbling up almost the entire Opposition. This is unheard of,” said a senior bureaucrat in Gangtok who did not wish to be named.

Golay had not contested the last election but was invited to form the government by governor Ganga Prasad after his party had narrowly won the election. The law required him to get himself elected to the Assembly within six months of assuming office.

Observers said the uncertainty over Golay’s eligibility to contest an election and Chamling’s insecurities about his political future provided an opportunity to the BJP to use its clout to make an entry into Sikkim.

“The BJP took advantage of the predicaments of the two leaders by first engineering the defections of 10 SDF MLAs with the blessings of Chamling and then forcing the SKM to go in for a tie-up for the bypolls,” an analyst said.

The BJP’s victory is a successful culmination of the party’s effort to secure a toehold in Sikkim. It had sought to fight the last Assembly elections in April in alliance with the SKM, but the regional party had backed out even after the tie-up was announced in Delhi.

This time though, the BJP managed to get the SKM to agree to an alliance a day before the Election Commission of India (ECI) paved the way for Golay, who was barred from contesting an election because of his conviction in a corruption case, to participate in the bypolls.

Golay had served a year’s term and was released on August 10 last year. A provision in the Representation of the People Act, 1951, bars a person convicted of corruption from contesting any election for six years from the date of his release. The ECI, however, had reduced the disqualification period for Golay to just a year and one month, which enabled him to contest the bypoll.

Chamling’s party had fielded candidates from all the three seats in the bypolls, but all of them lost. Analysts said the results signalled the fall of the SDF, which even while losing the last election had the larger share of votes: 48.98 per cent against the SKM’s 47.96 per cent.

“The SDF’s vote share has suffered a dramatic fall in all the three constituencies, which clearly suggests the party’s political graph is on the southward curve. It will be hard for the party to recover ground from here,” said an analyst.