A get-together had been organised by the dissidents last Monday in Bongaon, where the likes of Thakur, Majumdar, Tiwari and Basu were present 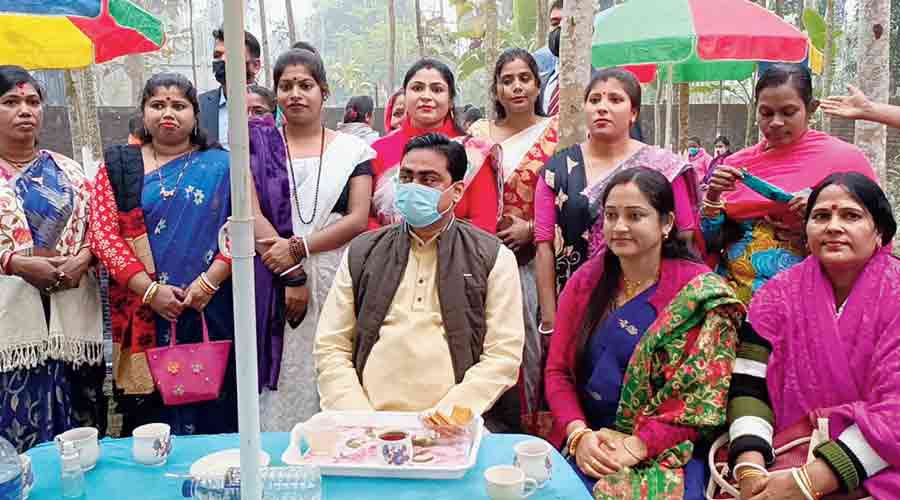 Bongaon MP and junior Union shipping minister Santanu Thakur on Sunday attended a picnic organised by some dissident BJP leaders at Gobardanga in North 24-Parganas and said he would attend more such get-togethers across the state.

The announcement was seen as an act of defiance on a day the state BJP showcaused two dissident leaders — Jay Prakash Majumdar and Ritesh Tiwari.

Several prominent state BJP leaders — like Tiwari, Majumdar and Sayantan Basu — were recently dropped from the state committee, which created a furore in the party as they openly demanded the removal of the state general secretary (organisation) Amitava Chakraborty. Those dissidents held several meetings in the past couple of weeks, many of which were attended by Thakur.

A get-together had been organised in the garb of a picnic by the dissidents last Monday in Bongaon, where the likes of Thakur, Majumdar, Tiwari and Basu were present.

Both Majumdar and Tiwari are former vice-presidents of the state BJP. After the reshuffle, Majumdar has been made a spokesperson for the Bengal BJP.

Several BJP sources close to Chakraborty said the showcause notices were served to prevent more people from joining the dissidents’ camp, which has found a leader in Thakur, angry with the state leadership over the non-inclusion of any Matua leader in the new state committee.

“I will hold more such get-togethers across the state, wherever BJP workers have been deprived of their dues, wherever there are people of my community, the SCs and the STs...,” Thakur, who is the chief of the Matua Mahasabha, a community outfit, said.

Sources said Thakur was planning to champion the cause of the dissidents across the state.

“While initially, Shantanuda wanted to show his strength to the Amitava camp, he is now focussing on establishing himself as a state leader and not just a Matua face,” a source close to Thakur said. The source added the showcause notices to the two dissidents further deepened the fissures in the state BJP.

When the showcause notices were served on Majumdar and Tiwari on Sunday, Thakur was at the picnic. Asked to react to the showcause, he would meet more dissident leaders and the current state leadership “can do whatever they want to”.

“It is my duty to save the BJP from a possible breakdown. That is what I will do as an MP and a minister. I will meet more people. Will they chuck out everyone who meets me?” asked Thakur.

“I will also write to the Prime Minister and the Union home minister urging them to implement the CAA fast,” Thakur said

The letters to Majumdar and Tiwari read: “In the past few days, you have issued anti-party statements to the press, which tantamounts to breach of discipline. Accepting the recommendation of the party's disciplinary action committee and following the orders of state president and MP Sukanta Majumdar you are being asked to show cause for your actions.”

Speaking to this newspaper, Tiwari admitted that he had received the showcause. However, he took a dig at the current state leadership and asked how the letter had been leaked to journalists.

“It appears the party is modernising itself. A showcause letter sent to me has been leaked to journalists. I’m a loyal BJP soldier and will reply to the showcause in time. I have no grudge against Sukanta Majumdar or Narendra Modi, Amit Shah or J.P. Nadda,” Tiwari said.

However, no reaction was available from Majumdar.

Haringhata BJP MLA Asim Kumar Sarkar in a video message said he supported the issues raised by Thakur. “He had some recommendations about party committees and organisation. But, the state leadership paid heed to none of his recommendation. So, it is quite a natural grievance on the part of Thakur. But I don’t like the way he has taken up the issue. He should have resolved it through talks. It would be better for all,” said Sarkar.

The showcause notices weren’t shared by the BJP’s media cell on the official WhatsApp group maintained to communicate with journalists.