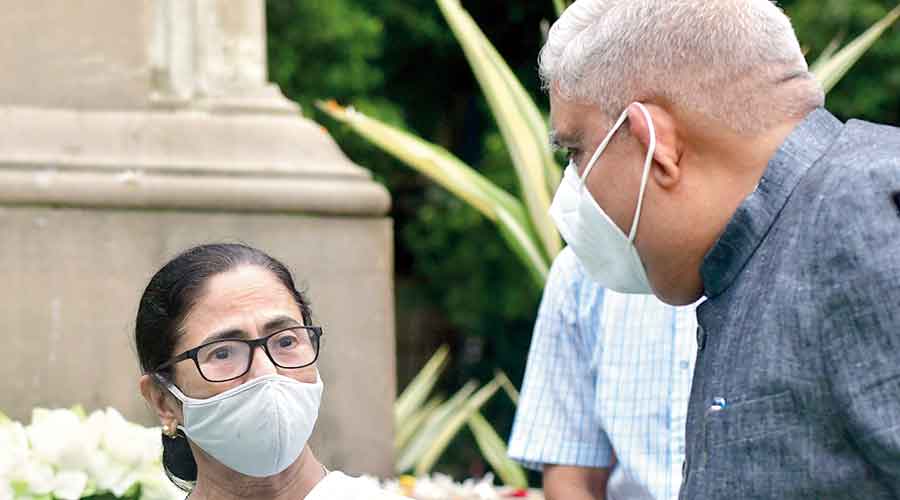 The BJP had moved heaven, earth and Narendra Modi in the hope of winning 200-plus seats in the 17th Bengal Legislative Assembly.

When the august House convened on Friday, the BJP’s 70-plus members moved heaven and earth to make their presence felt and ended up stealing the governor’s 15 minutes of fame.

Governor Jagdeep Dhankhar was unable to fully read out his address because of protests from the Opposition benches. Dhankhar spent barely eight minutes inside the House after his ceremonial entry — escorted by Speaker Biman Banerjee and chief minister Mamata Banerjee — around 1.58pm.

When he rose to read out his 14-page speech, the BJP MLAs began protesting against the alleged post-poll-results violence in the state. Dhankhar sat down and then tried again but as the sloganeering continued, he read the last paragraph and his ceremonial exit followed.

“We knew that the BJP wanted to disrupt the whole session, but they couldn’t do it, as the governor read the first and the last paragraphs, and the speech was tabled…. The BJP failed in its plan, and now the discussions will duly take place on this speech,” said a source close to Mamata.

However, the saffron camp too was happy with the scale of disruption and the mileage it got from the chaos on Day One. Multiple first-time lawmakers told this newspaper that they had come prepared to precipitate bedlam.

“We did it because there was no mention, whatsoever, of the post-poll violence in the address, drafted by the state government. There was no mention of Trinamul’s goons, the inert police’s role — none of it. No violence found any mention in the speech…. We presented the reality before the House; we formally lodged our protest on its floor,” said Suvendu Adhikari, the Nandigram MLA from the BJP and leader of the Opposition in the Assembly.

Although the Bengal Assembly has seen such stormy scenes over gubernatorial addresses before — old-timers recalled the tumult generated by the Congress during addresses by B.D. Pande and Saiyid Nurul Hasan in the 1980s — the context was different this time.

There was intense speculation about the content of the governor’s speech – drafted by the state government and approved by the state cabinet -- as Dhankhar had publicly expressed his reservations about alleged discrepancies.

The source added that Dhankhar appreciated the chief minister’s epistolary response. The source disclosed that inside the House, Mamata apparently advised Dhankhar to read the last paragraph -- when the BJP’s pandemonium forced him to pause -- and table it.

The governor’s decision to table the speech without any deviation from the script allowed the taut treasury benches to heave a sigh of relief.

“Had he tried to be like the Kerala governor (Arif Mohammad Khan) and added what he felt, it would have been an embarrassment for us even if the Speaker had it expunged from the House records,” said a source.

In Kerala, governor Khan had initially refused to read a couple of paragraphs in his address to the House there last year. The paragraphs were related to the contentious citizenship matrix of the Narendra Modi government at the Centre. Eventually, Khan did read out the paragraphs but went on to tell the Assembly about his reservations, and said he had read them because chief minister Pinarayi Vijayan wanted him to.

Team BJP in the Bengal Assembly too was buoyant, confident that it had made a mark on the inaugural day of the key session by bringing the alleged post-poll-results violence to the forefront as an issue.

Adhikari said his party wanted discussions on the alleged violence and the fake vaccination camps one day each during what remains of this brief House session.

The saffron plan, however, is unlikely to materialise as the session is likely to end on July 9 after discussions on the governor’s address and the presentation of the state budget for the current fiscal.

“We know it well that they will not allow any discussion on what we want.… But we could flag the issues today the way we wanted to,” said a source in the BJP camp.

He said Adhikari had been advised by Union home minister Amit Shah -- whom he met in Delhi on Thursday -- to use belligerence as the party’s main strategy in the Assembly.

If Adhikari can deliver, while keeping the flock together -- a major challenge now as Trinamul is fairly confident of securing defections from at least 15 of the BJP’s 74 remaining MLAs – the House is likely to witness more turbulent scenes.

“During Left rule, principal Opposition Congress was also quite capable of causing disarray. But their Delhi leadership, then running the government at the Centre, never wanted to precipitate a crisis. But this BJP-led Centre is keen on consistently fomenting unrest, and it will get reflected in this Assembly,” a House veteran from the treasury benches said.

Deputy Speaker: Former agriculture minister Asish Banerjee of Trinamul, a five-term MLA from Rampurhat, has been elected deputy Speaker of the Assembly.