The TMC has, in the past, accused the central forces deployed during the elections of working in favour of the saffron party 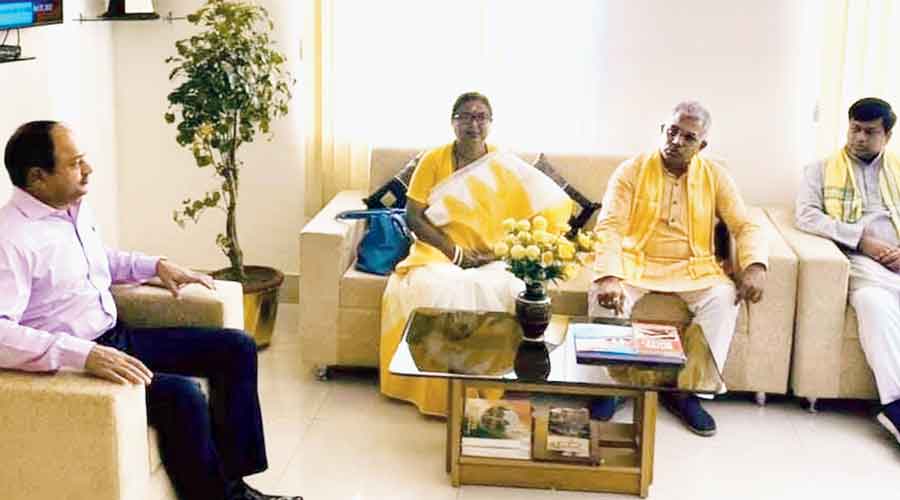 BJP leaders with the DIG of BSF at the sector headquarters of the force in Cooch Behar on Wednesday.
Telegraph picture
Main Uddin Chisti   |   Cooch Behar   |   Published 29.10.21, 01:03 AM

The ruling Trinamul on Thursday lodged a complaint with the Cooch Behar district magistrate referring to a meeting between senior state leaders of the BJP and the deputy inspector-general of the Border Security Force  on Wednesday and alleged it was held to “influence” the October 30 Dinhata bypoll.

The meeting between BJP leaders, including state chief Sukanta Majumdar and his predecessor Dilip Ghosh, along with party’s Cooch Behar district president Malati Rava, and the BSF DIG Shailendra Kumar Sinha held at the sector headquarters in Cooch Behar-II block assumes significance not only because of Saturday’s bypoll, but also as the recent Union home ministry decision to extend the BSF’s jurisdiction from 15km to 50km inside Indian territory from the international border.

“Dinhata constituency comes under BSF jurisdiction according to the new notification... We fear the BJP may use the BSF during and ahead of the elections to harass our party workers, leaders and common voters,” said Partha Pratim Roy, a former MP and election agent of Udayan Guha, Trinamul candidate.

Sources in Trinamul said that the party's top brass asked the district leadership to flag the issue. The Trinamul has, in the past, accused the central forces deployed during the elections of working in favour of the BJP.

“We think the BJP leadership violated the model code of conduct and that’s why we have urged the DM, who is also the district election officer, to take steps,” Roy added.

“I am a member of the parliamentary standing committee on home affairs. Whenever I visit bordering areas, I pay courtesy visits to BSF officials. It was such a meeting,” Ghosh said on Wednesday’s meeting.

DM Pawan Kadyan did not comment. Sources in the chief electoral officer’s office said they were looking into the complaint.

BJP district leaders said Trinamul was making a hue and cry about the meeting as they were nervous about Saturday's bypoll. "They had lost the Assembly elections in Dinhata and now they will also lose the bypoll... We are organisationally far ahead of Trinamul here,” said a BJP leader.

Local Trinamul leaders admitted that Guha was on difficult turf against BJP nominee Ashok Mondal. Cooch Behar Trinamul’s internal feuds cost it dear in the Assembly polls. The party lost seven of the nine seats in the district.

The BJP filed a complaint with the chief electoral officer of the state, demanding immediate transfer of the DM and the SP of Cooch Behar district. The DM had said no to identity checks of voters when they enter the booths or stand in queue, and the SP failed to provide security to their candidate, they alleged.

Aariz Aftab, the chief electoral officer of Bengal, held an all-party meeting in Calcutta on Thursday ahead of the electoral roll revision that begins with the publication of the draft electoral roll on November 1. The final electoral list will be published on January 5, sources  said.