The carnage has triggered a political slugfest in Bengal, with Trinamul rather unusually finding itself on the back foot 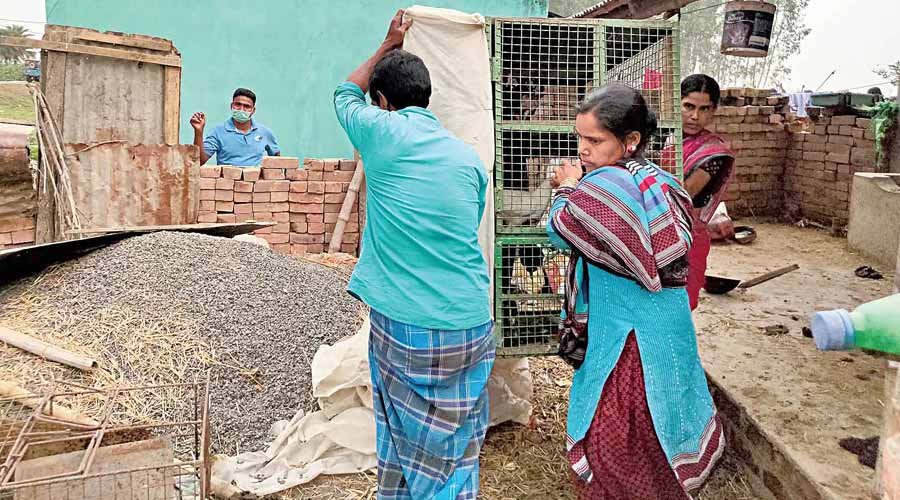 A suo motu complaint lodged by Birbhum police has linked the Bogtui massacre of eight people to the murder of Bhadu Sheikh, the undisputed leader of Trinamul in the area, and named 22 of his associates as suspects.

Senior police officers stressed that the complaint does not contradict the ruling party’s claim that the killings — the worst carnage since the Mamata Banerjee government came to power — had nothing to do with politics and were triggered by a “family feud”.

However, if the massacre is looked at against the backdrop of Trinamul hegemony in Birbhum, de-linking it from politics would be an oversimplification, said a professor at Visva-Bharati who did not wish to be quoted.

The two-and-a-half-page police complaint presents a rough chronology of events between Bhadu’s killing and the alleged retaliation by his supporters.

Twenty suspects, most of them named in the complaint, have been arrested.

“During preliminary enquiry, it was learnt that as a retaliation of the incident of murder of Bhadu Sk, the followers and associates of slain Bhadu Sk (22 persons named earlier) along with 70-80 others in the form of an unruly mob ransacked the houses of the persons as noted above and set fire to the houses with a view to kill the persons inside and their family members,” reads the complaint, lodged with Rampurhat police station.

The probe by the special investigation team (SIT) formed by the state government is going on based on this complaint. A high court division bench headed by Chief Justice Prakash Shrivastava on Wednesday asked the SIT to submit a progress report on its probe within 24 hours.

Within hours of the recovery of seven charred bodies — the eighth victim died in hospital — from two houses in Bogtui, DGP Manoj Malaviya had first delinked the incident from politics.

“There is no political rivalry; (it) seems to be a case of personal enmity. There was some rivalry between two groups and angry locals,” Malaviya had said on Tuesday.

Senior Trinamul MP Sudip Bandyopadhyay made the same assertion in Delhi on Wednesday.

“There is no conflict between BJP and Trinamul, or any other party (and) Trinamul. The incident took place due to an internal dispute between the two families,” he said.

This narrative is difficult to contest as the attackers and victims in Bogtui — a Trinamul fief since the panchayat elections of 2018 when Bhadu won uncontested and became deputy chief of the Trinamul-run Barshal gram panchayat — had no political or ideological differences.

Multiple sources in Trinamul’s Birbhum unit said Bogtui had a history of enmity between two party groups, which clashed regularly over the spoils of illegal sand and stone businesses and panchayat contracts.

But the Visva-Bharati professor said Birbhum had become virtually Opposition-less because of the terror tactics of Trinamul district president Anubrata Mondal, and that people strove to stay on the good side of Trinamul out of fear or greed for favours.

“Trinamul, however, is not a homogeneous entity and there are conflicts over who would control the area. This is intra-Trinamul politics and the Bogtui incident was an outcome of this politics. So, we cannot say there was no politics involved,” the professor said.

The massacre has triggered a political slugfest in Bengal, with Trinamul rather unusually finding itself on the back foot.

On Wednesday, Opposition parties made a beeline for Birbhum, sensing an opportunity to corner the ruling party.

Mamata will visit the area on Thursday. Sources close to her said the visit would be part of her attempts to ensure peace and address the concerns of Bogtui residents, most of whom have fled the village.

On Wednesday, most of the residents — those who have left and those who have stayed on — expressed their lack of trust in the state police and demanded a CBI probe.

An implication of the local police’s slackness seems to emerge from the police complaint, lodged by sub-inspector Dhruba Jyoti Dutta.

It says a police team had been deployed at Bogtui More as there was tension after Bhadu’s death.

“At around 21.35 hours received information from SI Ramesh Saha of Rampurhat PS (duty officer) that some houses of Bogtui village have caught fire and burning. He asked me to pursue the information… at about 22.05 hours we reached at Bogtui village which is located at a distance of 1 km from Bogtui more on NH 60,” reads the complaint.

A police officer unconnected with the case wondered why it had taken the police half an hour to reach a place 1km away. Several villagers too suggested that prompt police action might have averted the tragedy.

Dutta’s complaint says that after reaching the spot, he asked the duty officer to call the fire brigade while he joined local people in trying to douse the flames. The fire brigade arrived at 10.25pm, the complaint adds.

“The fire station is around 3km from the spot and they took only 20 minutes while the police took half an hour to cover less than 1km.... Isn’t something fishy?” the police officer not connected with the case said.

On Wednesday afternoon, the police produced the arrested suspects at Rampurhat court.

“The additional chief judicial magistrate of Rampurhat, Souvik Dey, has sent 10 of the 20 arrested people to 14 days’ police custody while the rest will be in jail custody for 14 days,” said Surajit Sinha, assistant public prosecutor of the court.