He had said he was handing over the flag to Gurung, and his decision in 2017 to join hands with Trinamul was to 'save the hill, people and the party' 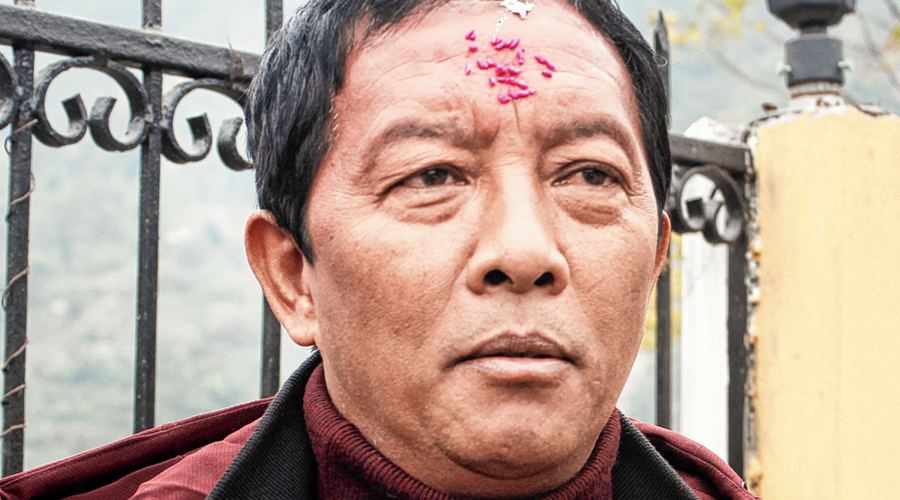 Binay Tamang’s colleagues in the Gorkha Janmukti Morcha faction had been headed towards his house, surprised by the suddenness of his decision to resign, but they returned halfway after the veteran decided to hand over the faction’s flag to their arch-rival Bimal Gurung, sources said.

Tamang on Thursday resigned as the head of the faction he had formed in 2017 and headed since, at a media conference at his residence in Dali, some 4km from Darjeeling on Thursday.

Tamang had said he was handing over the flag to the original owner Gurung, and his decision in 2017 to join hands with Trinamul was to “save the hill, people and the party”.

“We had been following his media conference and the moment he resigned from the party, there was a buzz and many of us rose up and started heading to his home to diffuse the situation,” an insider said on Saturday. “But we felt let down with the decision to hand over the flag to Gurung and this is when we decided not to proceed further.” The insider added why they felt let down. “We had followed him when he decided to revolt against Gurung.”

Some of these leaders sent Tamang text messages, but refused to divulge the contents.

The sources said a woman leader of his faction had reached Tamang’s residence on Thursday evening. “However, when she saw Tamang was with Noman Rai (a leader of Bimal Gurung’s faction), she too decided to return without meeting him,” said the source.

Leaders of the Tamang camp this paper spoke to said that though differences had lately cropped up between Binay Tamang and his general secretary Anit Thapa, they had no inkling that it was irreparable.

“We still believe that a one-on-one meeting between the two leaders would have diffused the situation. If we had reached his house on Thursday evening and had a good talk, we believe the issue would have become normal,” said a leader.

However, even this leader added that by Saturday “much water had flowed down the Teesta for reconciliation”.

Sources said that some indirect grievances were being aired by Tamang in the faction’s WhatsApp group for some time. “However, none thought he would resign,” said the source.

In recent months, there had been a buzz within a section of leaders that Tamang was in touch with Trinamul and BJP leaders, without informing the rest of the faction. Tamang had dismissed these as “mere rumours”.

Party leaders admitted that seeds of factionalism were sown when Anit Thapa took charge of Gorkhaland Territorial Administration (GTA) after Tamang stepped down in 2019 to contest the Darjeeling Assembly by-election.

Tamang, however, lost to GNLF leader Neeraj Zimba who was contesting on a BJP ticket.

Tamang’s recent decision to take absolute control of the party and issue a media gag on all leaders was the catalyst for dissent within the party, said the source.

Thapa’s invitation at the state government event to mark the 207th birth anniversary of Nepali poet Bhanubhakta Acharya at Chowrasta on July 13 and his s subsequent decision to attend a Darjeeling subdivisional committee meeting afterwards were possibly the immediate triggers for Tamang to tender his resignation.

Tamang and Gurung, also an ally of Trinamul, were not invited to the Chowrasta event.

At the subdivisional committee meeting, sources said that Thapa had told the leaders that the faction should not derail because of one person. Many feel that Tamang was of the opinion that Thapa’s statement was aimed at him..

“Thapa’s speech at the subdivisional committee seems to have been the final nail in the coffin,” felt a source.

Thapa was on Friday elected the “acting president” of the Morcha faction, while continuing to discharge his responsibility as the general secretary.Soon after taking charge, Thapa reversed Tamang’s media gag on the leaders of the faction.