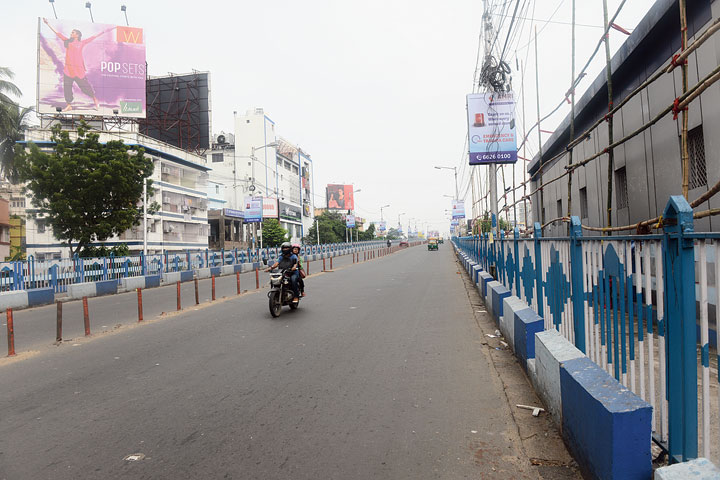 The dates for a load test of Bijon Setu, which had been scheduled before Durga Puja but postponed to avoid a traffic mess during the festive rush, could be decided on Friday, officials associated with the bridge’s upkeep said.

The Calcutta Metropolitan Development Authority (CMDA), the custodian of the bridge that connects east and south Calcutta, is likely to fix the load test schedule at a meeting that will review the ongoing health study of bridges and flyovers.

A police officer told Metro that a weekend between Durga Puja and Kali Puja would be ideal for the test because of thinner traffic during the period compared with weekends in other months of the year.

“Only one weekend is left before Kali Puja. If the CMDA fails to decide a schedule by Friday (October 18), it’s unlikely the test can be performed before Kali Puja,” said a police officer.

“The load test is necessary and we do not want to delay it. But we also have to keep in mind that Bijon Setu is very important for traffic. The test dates could be fixed on Friday,” a CMDA official said.

The CMDA had earlier scheduled to close the bridge between 10pm on September 13 and 5am on September 16 for the test. But it had to be postponed after the police said closing the bridge a fortnight ahead of Durga Puja could trigger an unmanageable traffic mess.

The bridge links Gariahat, a popular shopping hub, with the Bypass-Ruby connector. The police were wary of closing the bridge in the run-up to Puja, when shoppers descend on Gariahat in thousands every day.

The load test is part of a health study of the bridge. The collapse of the Majerhat bridge in September last year had prompted the urban development department to form a committee of engineers to conduct a health scan on bridges and flyovers.

This newspaper has reported that tree roots had penetrated into a portion of Bijon Setu below the deck. Concrete had peeled off the underbelly in several places, exposing corroded steel reinforcements.

For cars, too, the three connectors were chosen as alternative routes.