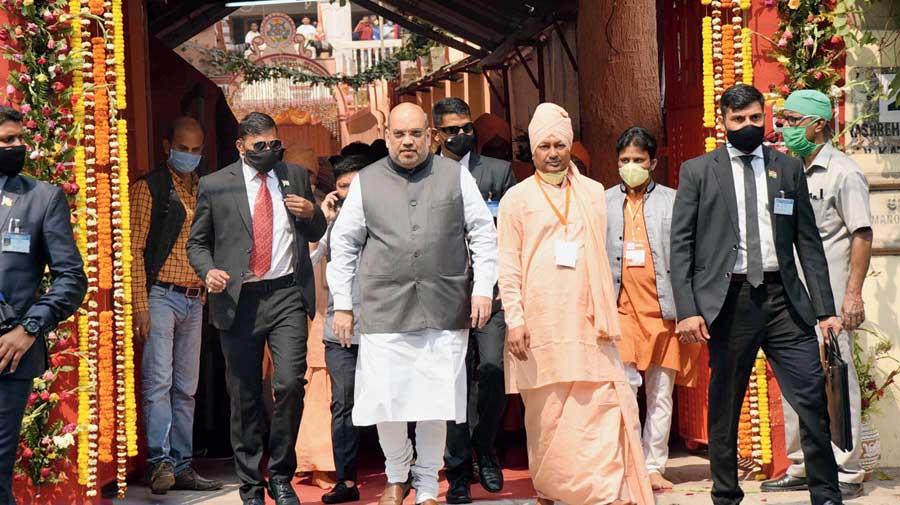 Monks led him to the main hall of the Sangha down a red carpet, garlanded him and gifted him a shawl. Shah said Bharatiya Jana Sangh founder Syama Prasad Mookerjee and Swami Pranavananda shared similar ideologies. Shah, who lit a candle and performed an aarti of Swami Pranavananda, spoke of being influenced by a Sangha monk in Ahmedabad.

“I used to visit Bharat Sevashram Sangha in my younger days. Swami Ganeshananda of the Sangha’s Ahmedabad unit influenced me immensely,” Shah said to a small gathering of monks in the 45-minute event.

“The Bharat Sevashram Sangha through its seva (service), samarparan (surrender) and tyaag (renunciation) has set a great example to all other institutions serving mankind,” he added.

Senior BJP leaders including Kailash Vijayvargiya, Dilip Ghosh and Mukul Roy had accompanied him to the Sangha’s Rashbehari Avenue address.

“We had formally invited him to come down on the occasion of the 125th birth anniversary of Swami Pranavananda Maharaj. That was nearly a year ago, and he had then said he would come,” said Dilip Maharaj of the Sangha. “On his (Shah’s) way out (on Thursday) he said he gathered strength after visiting the Sangha and paying tribute to Swami Pranavananda.”

said: “These days, a strange idea of religion has cropped up among a few...that says ami thakbo, tumi baad (I’ll stay and you are out)....Ami etar pokkhey noi (I’m not in favour of this).”

“Their (those who believe in such a concept of religion) brains have turned into a morubhumi (desert). Aamra morubhumi chai na (We don’t want deserts),” she said.