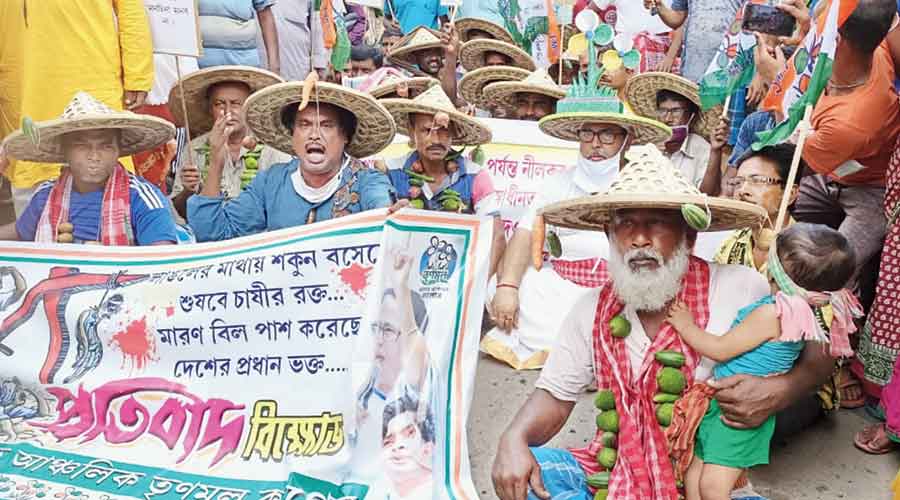 Three farm reform bills passed by Parliament recently may play havoc with the public distribution system in Bengal as the state government’s procurement programme is likely to get affected because of entry of big players.

The Farmers’ Produce Trade And Commerce (Promotion And Facilitation) Bill, The Farmers (Empowerment and Protection) Agreement on Price Assurance and Farm Services Bill and The Essential Commodities (Amendment) Bill had been passed during the monsoon session of Parliament this week.

The PDS has over 8 crore beneficiaries in Bengal and if the procurement of agricultural produce — mainly paddy — goes awry, it will have an impact on food security of poor people, said a senior state government official.

“Big players will be able to buy farm produce directly from farmers and there would be no bar on stockpiling of food grains. The question is: where will the government get food grains to run its PDS?” said the official in the food and supplies department.

Unlike some north Indian states like Punjab and Haryana, the government procurement process in Bengal is inefficient because of which there is a degree of reluctance among farmers in selling their produce to the administration. Although the minimum support price is a big political issue, there is not much awareness of the MSP in rural Bengal.

A senior bureaucrat with the experience of handling procurement said it had been in the past that some farmers didn’t often prefer to sell their produce to government agencies even if local middlemen offered Rs 150 to Rs 200 less for a quintal compared to the MSP.

According to him, the reluctance is because several procedures are involved in selling produce to the government.

“Sometimes, a farmer gets a date after three-four months from the date of registration. Many of the farmers cannot hold the stock for so long,” said the bureaucrat, recalling his experience.

Other formalities like giving bank details for transfer of money and the onus on the farmers to take the produce to the centres — often set up 15 to 20km away — also act as deterrents.

“There are indeed some shortcomings and efforts are being made to make the procurement process attractive for the farmers,” said an agriculture department official.

“The Centre may say that’s why the farm bills are introduced to make the process smooth and bring in more competition, but the problem is, in reality, the situation will be loaded against the farmers and the poor people in the state, who depend on the PDS,” the source said.

The objective of bringing in competitive forces in agriculture, he said, would remain only on paper as the changes in the rules of the game will result in monopsony, a situation where there is only one buyer, kind of a market.

Several officials this correspondent spoke to said one of the biggest problems in the reform matrix was the change in the essential commodities act that would allow big players to stock farm produce for months in their state-of-the-art warehouses.

Those in favour of the reforms may say that hoarding may not be a problem in today’s world as imports can be made to tackle supply shocks, but an official referred to the weather dependence of Indian agriculture and occasional spike in prices of various agricultural products.

“If the state government can’t intervene in such times, what will happen to the poor?” he asked while questioning the rationale of bringing in big players in the business of food.

Another officer said the state now required more than 42 lakh tonnes of paddy every year to run its cheap grains scheme and the entry of big players would make procurement difficult as the private players would use the middlemen to scoop up farmers’ produce.

“Besides, people offering warehousing services in the districts will be wiped out with the entry of big players, who will create huge storage space with modern facilities,” said the officer.