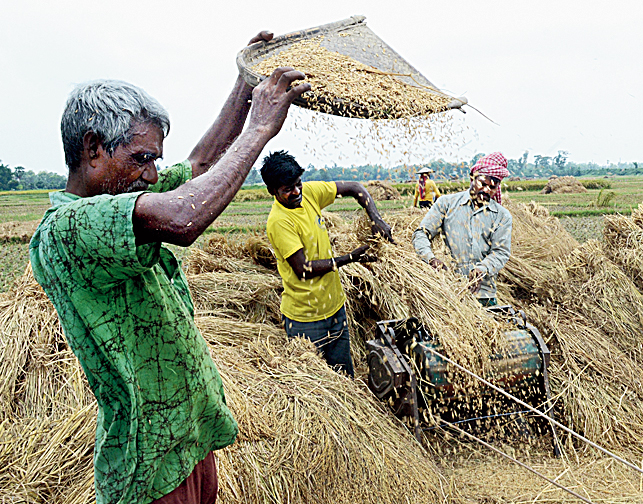 The Mamata Banerjee government has released Rs 1,600 crore to give a momentum to paddy procurement, taking the total amount for the purpose to Rs 5,100 crore since November last year.

The move apparently aims at ensuring that maximum farmers in Bengal get the minimum support price (MSP) offered by the state.

“We have a target of procuring nearly 50 lakh tonnes of paddy from farmers by September this year. But the government wants to buy maximum quantum of paddy by February to ensure that no small farmer goes for distress sale. That is why such a handsome amount was released for the purpose,” said a senior government official.

The state’s efforts have yielded results and it is visible on the ground. Till Friday, the government has procured about 13.5 lakh tonnes of paddy compared to 6.5 lakh tonnes collected during the same period last year.

“If the state doesn’t pump in handsome amounts in the beginning of the procurement season, the whole exercise cannot gain momentum as the farmers want money immediately. Although the Bengal government gets reimbursements from the Centre for its expenses, the initial expenditure has to be incurred by the state,” said an official.

He pointed out that last year, the procurement did not get a momentum till early January as the government had released just Rs 2,000 crore during the same period.

“Earlier, we used to transfer money directly to the accounts of the farmers. But in rural areas, the process was taking some days to send money to the accounts as the co-operative banks did not have the online fund transfer facility. Using the situation, some middlemen would mislead farmers that they should sell their produce to local markets at a much lower rate,” said an official.

Trinamul insiders said the chief minister was monitoring the situation on a regular basis since the procurement started in November. “She was very clear that more and more farmers would like to sell their produce to the government as the market rate was much lower. While the government’s MSP was Rs 1,770 a quintal, the market price of paddy was hovering between Rs 1,400 and Rs 1,450. That is why a handsome amount was released this year for procurement,” said a Trinamul MLA.

A minister said the ruling party was aware that if majority of the farmers didn’t get the MSP ahead of the Lok Sabha polls, Trinamul might face questions from the farmers.

“A total of 72 lakh farmers in the state hold immense importance in terms of electoral success. We cannot take any risk of making farmers hostile,” the minister added.