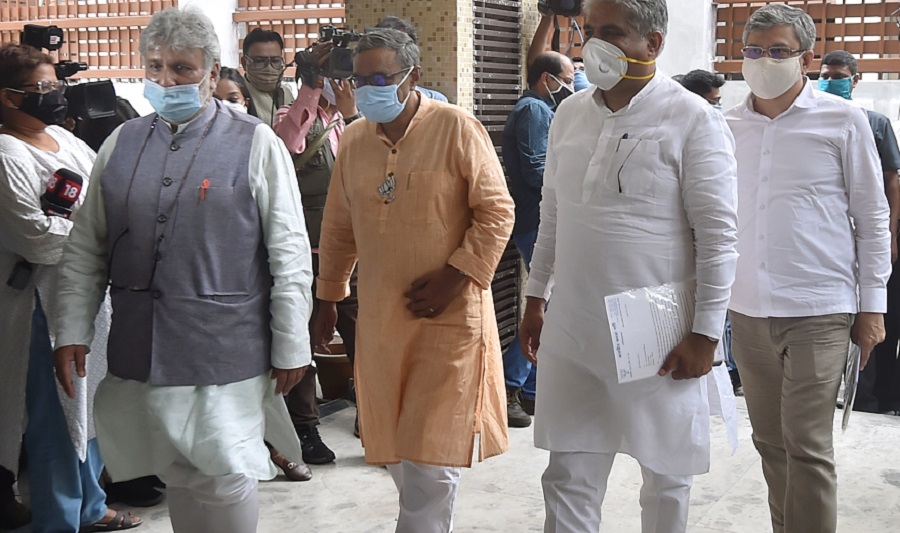 The Left Front and the BJP on Friday told an all-party meeting called by the Chief Electoral Officer (CEO) over the alarming Covid-19 situation in Bengal that the poll schedule should be maintained and they were against the clubbing of the remaining four phases of the election.

Out of the eight-phase Assembly elections in the state, four phases have been completed and the remaining four are scheduled to be held between April 17 and 29.

"Our point is that the schedule should be maintained,” CPI(M) Rajya Sabha MP Bikash Ranjan Bhattacharya said after the all-party meeting.

“The election is in motion. There is no question of a change of schedule at this point of time," Bhattacharya said.

Bengal CEO Aariz Aftab called the all-party meeting following the Calcutta High Court’s direction to him and all district magistrates of the state to ensure strict implementation of Covid-19 protocol during campaigning for the remaining phases of the election.

Chief Minister and Trinamul Congress supremo Mamata Banerjee on Thursday urged the Election Commission to think about conducting polls for the remaining assembly seats at one go. The EC had dismissed questions of such a possibility on the day.

On Friday, too, the Trinamul Congress sought clubbing of the last three phases of the elections. Emerging from the meeting, TMC Secretary General Partha Chatterjee said that in order to save the lives of people and to control Covid-19 infections while allowing candidates ample time for campaigning, a balance has to be drawn by the Election Commission.

"We have told the commission that in order to give the people proper healthcare facilities amid Covid situation, the last three phases may be clubbed into one, while ensuring that the democratic rights of the people are upheld," Chatterjee told reporters.

Bhattacharya, however, said that it was agreed upon at the meeting that campaigns, including public meetings, for the coming phases of the elections can be held abiding by the Covid-19 protocol.

He said that clubbing of election dates was not on the agenda.

"Someone wanted to raise the issue, but it was not discussed in detail," the CPI(M) leader said.

Bhattacharya said that the Left Front has told the meeting that it is adhering to the Covid-19 protocol during campaigning and will continue to do so.

"There is no allegation against the Left Front that it is not following the Covid guidelines," he said.

BJP leader Swapan Dasgupta, who represented the party in the meeting, said the party does not want any step that would affect the "democratic spirit", echoing sentiments of the CPI(M).

"We said that our party will abide by all Covid-19 protocols put in place by the Election Commission, and urged that no steps be taken that discriminate those voting in the next phases from those who have already exercised their franchise.

"We have not said anything about clubbing (of phases),... we feel that the elections will be held in eight phases," Dasgupta told reporters after the meeting.

Asked about the rising number of infections and deaths due to Covid-19 in the state along with the rest of the country, he said that campaigning cannot be stopped, and also wondered how the rights of the contestants and the voters can be taken away.

Dasgupta said that virtual election meetings for the remaining phases are not possible as half of the eight phases have already been held.

"A level playing field has to be maintained...We have advised the Election Commission to balance the need for a robust democratic culture with safety norms.

"It is up to the Election Commission to tell us what exactly the political parties must do. We have assured the EC that under all circumstances, once it has laid down the procedures, the BJP will adhere to the norms faithfully."

He said that the saffron party will provide masks to its supporters and workers at public meetings to ensure that health protocols are maintained.

Against the backdrop of rising Covid-19 cases, the Election Commission on Friday put in place restrictions on campaigning by political parties, including curtailing its time, for the Bengal Assembly elections.

In an order, the poll panel curtailed the time for campaign up to 7 pm. Earlier it was up to 10 pm.

Now there will be no campaign between 7 pm and 10 am on campaign day in the state, the Election Commission said.

It also extended the silence period from 48 hours to 72 hours in each of the remaining three of the eight phases of the Bengal polls to be held on April 22, 26 and 29.

During the silence period, which is usually for 48 hours, parties and candidates cannot hold rallies and meetings.