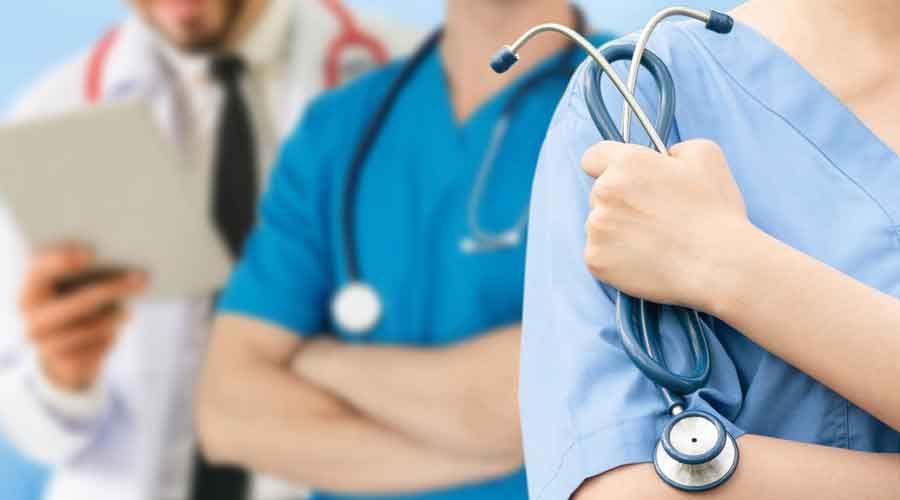 The Bengal health department is gearing to crack down on government doctors who work without permission at private healthcare units, or lure patients from state-run hospitals to private facilities by citing the Swasthya Sathi scheme.

In an advisory on Wednesday, the health department told each private hospital and nursing home to submit a copy of the no-objection certificate issued by the government to each government doctor working there.

The private health facilities will also have to provide certain details about each such doctor so that the health department can keep track of which doctor is treating patients under Swasthya Sathi at which private facility.

“Clinical establishment(s) can engage government doctors who are in practising post and not drawing non-practising allowance after fulfilling the conditions as stipulated in clause 6 of Chapter II of the West Bengal Clinical Establishments (Registration, Regulation and Transparency) Rules, 2017,” says the advisory, signed by Siddhartha Niyogi, state director of health services.

The 2017 rules say: “No clinical establishment shall engage or empanel any person already engaged by the Government of West Bengal, or allow such person to render any healthcare service who is yet to obtain an express permission in the form of a ‘no-objection certificate’ from the government.”

The advisory says: “Accordingly, it is hereby advised that the clinical establishment shall submit the copy of such No Objection Certificate (NOC) along with the application and shall display the detailed information regarding name, government designation, hours of availability at that clinical establishment of such persons. Any non-compliance with the same may be treated as violation of the West Bengal Clinical Establishments Act 2017 and action may be taken as appropriate.”

A senior health department official said: “It’s because of malpractices by some government doctors that we issued the advisory.”

The health department has learnt that many government doctors — including some who have not secured the NOC and therefore receive a non-practising allowance — are advising patients to get surgeries and other procedures done under the Swasthya Sathi scheme at smaller private healthcare units.

“There’s a rise in Swasthya Sathi claims but a fall in the number of surgeries and procedures done at government hospitals,” the official said.

More than 41 lakh hospital admissions had taken place under the beneficiary scheme between its launch in December 2016 and October 31 this year, according to the health department.

“During audits, it has been revealed that many claims under the Swasthya Sathi scheme are false, or that the bills have been inflated. These are mostly detected at the smaller nursing homes in Calcutta and the districts,” the health official said.

“So, the state government is bleeding — on the one hand it pays the doctor’s salary and perks, on the other it has to reimburse private facilities where the doctor gets the patient admitted under Swasthya Sathi.”

An official at a state-run medical college in Calcutta said the authorities often receive complaints about absenteeism by doctors assigned outpatient duty, the presumption being some of them might be treating patients at a private facility.