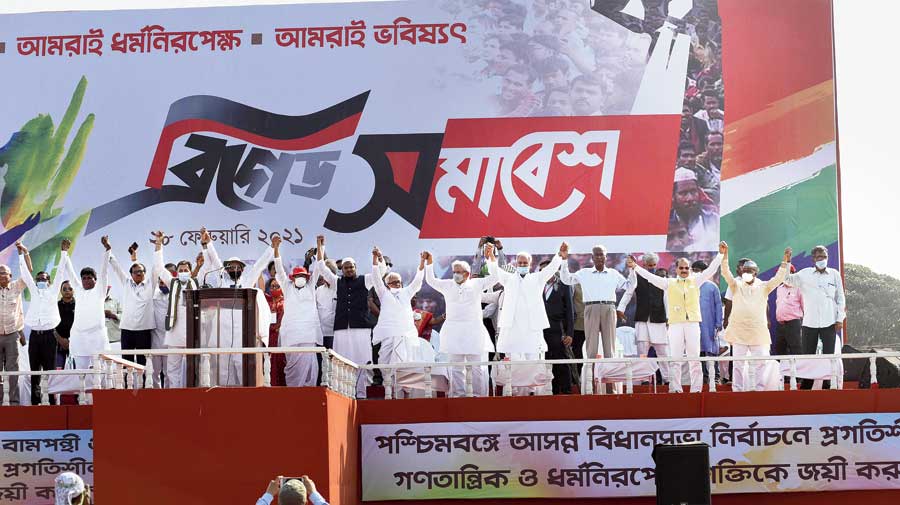 The Grand Alliance of the Left Front, Congress and Indian Secular Front (ISF) announced the seats they will contest in the first two phases of the assembly election in Bengal.

The Left Front will contest in the largest number of 40 seats in the first two phases, followed by Congress which will fight in 12 seats and ISF in five.

It is yet to be decided which party will contest from Egra, Nandigram and Pingla seats but will be decided amicably soon, Left Front chairman Biman Bose said.

Lights are trained on the contest in Nandigram as Trinamul Congress supremo and Chief Minister Mamata Banerjee has announced her candidature from the seat, which is known for its anti-farmland acquisition movement that changed the poliical scenario over a decade ago.

"The details will be given once they are finalised," Bose said.

Election will be held in 60 out of the total 294 seats in the first two phases of the eight-phased polls which is slated to stretch from March 27 to April 29. The date for the second phase of election is April 1.

The Left Front also announced the names of candidates for the seats allotted to it.

The Congress and ISF said that they will come out with the names of their contestants later.

Asked to comment on the announcement of contestants of Trinamul Congress earlier in the day, Bose said "I am not sure but there are whispers that the TMC list has been compiled after an understanding with the BJP. "

TMC had announced names of 291 contestants.

Accusing TMC of directly helping BJP to form the government at the Centre from 2014, Bose said "People are making certain comments with regard to the TMC list, about understanding with BJP. But no such comments are being made about us, about our lists by anyone."

He said the Left Front list of candidates will give representation to young faces.

Bose said while all the alliance partners will issue a joint appeal soon to defeat BJP and TMC and support secular, democratic and progressive forces.

"The Left Front, Congress and ISF will issue their manifestos separately," he said.

Asked if an understanding has been reached in 234 other seats, Bose replied "We will".

Congress Rajya Sabha MP Pradip Bhattacharya said the names of the party's candidates will be announced by its high command in Delhi.

Bhattacharya said even if there are differences over a few seats, it will be "surely sorted out" by the alliance partners.

"Our main aim is to unitedly fight against the falsehood spread by BJP and the undemocratic stance of Trinamul Congress," he added.

ISF leader Simul Soren said "We will announce the candidates in the next two days from the ISF office."

Asked if ISF wants to contest from Nandigram, Soren said "It is subject to discussion."

Bose said the LF, Congress and ISF are undertaking joint programmes against the "communal and fascist BJP and reactionary undemocratic TMC" at the block level.

He said on March 15 there will be joint protests by the Alliance partners across the state against divesting of the stakes of PSUs.

On March 12, the alliance will support its Kishan Morcha rally in the state against the anti-farmer policy of BJP, he said.

Congress had won 44 seats and the Left Front, which comprise mainly of CPI-M, CPI, RSP, Forward Bloc, won 33 seats fighting within an alliance in the 2016 state poll.