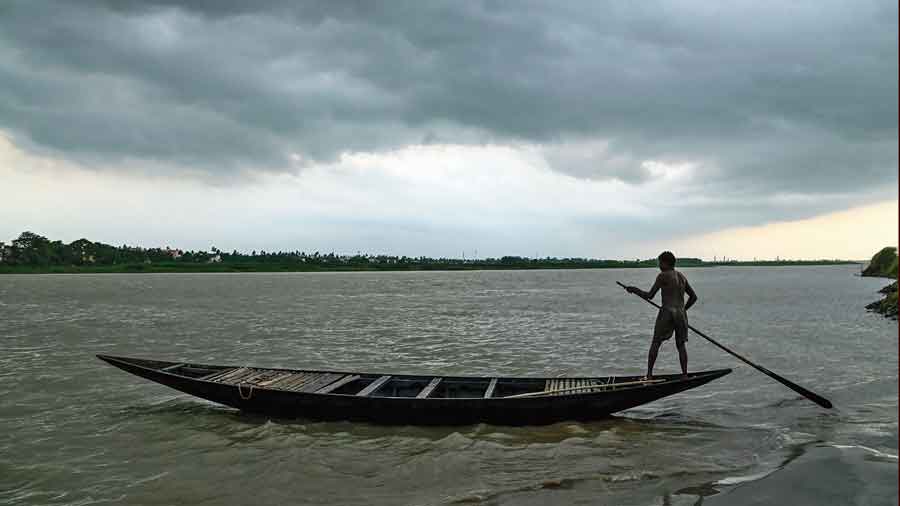 The Bengal government has alerted the administration of districts along the state’s coastal belt to be prepared in the wake of an anticipated low pressure that is likely to result in heavy rainfall and paralyse normal life across south Bengal from Monday to Thursday.

The state government clamped a five-day ban on sea bathing from Sunday for tourists in Digha. However, Kalyan Das, 48, of Tollygunge in Calcutta was swept away by the choppy sea in Digha on Sunday. Taken to a hospital later, he was declared brought-dead.

The weather office in Calcutta issued an orange warning in view of the threat of natural calamity impacting life and property on Tuesday and Wednesday, in particular, when heavy rain and gusty winds of 40kmph to 60kmph are likely to lash coastal districts of South 24-Parganas and East Midnapore. Other south Bengal districts, including North 24-Parganas, West Midnapore, Jhargram and Howrah, are also likely to be affected.

An orange warning is issued when wind speed is anticipated to be around 65kmph to 75kmph with heavy rainfall.

In the wake of the IMD alert and state directives, authorities of South 24-Parganas and East Midnapore, being the most vulnerable coastal districts, have taken up the most precautions.

As a first step, both the districts called back fishermen who went for deep marine fishing, setting Sunday afternoon as the deadline for return. Alerts using public address systems have been given across the districts, particularly fishing harbours of Canning, Kakdwip subdivision in South 24-Parganas and several places in East Midnapore, for fishermen not to venture into the sea until Thursday.

East Midnapore disaster management officer Mrityunjoy Haldar said tourists were barred from the sea at Digha, Mandarmani and Tajpur and fishermen were told to return to their base by Sunday afternoon.

“The disaster management department has issued an alert about the rough sea till Thursday. To avoid any loss of life, we have imposed a ban on sea bathing till August 11 and are campaigning to alert tourists,” Haldar said.

Officials of the state fisheries department were seen visiting fishing harbours and interacting with fishermen’s organisations urging them to call back those out in the sea by Sunday afternoon.

Owing to the possibility of lightning, the state government asked people to stay indoors. At all vulnerable areas, the district administration through loudhailers are making people aware of the risks of lightning since Sunday morning.

“Lightning is a big threat to life, hence we have taken up massive awareness drive across the subdivision,” Canning SDO Prateek Singh told The Telegraph. “We are working with the police and disaster management teams.... Our BDOs are engaged in updates from the ground so that all apparatuses can be made functional instantly to help people in distress,” Singh added.

None of the district administrations, however, made any advance evacuation from the vulnerable areas.

SDO Kakdwip, Aranya Banerjee, told The Telegraph: “We have kept our flood shelters prepared with all emergency needs so that people can be evacuated within a small time if needed.”

Nabanna has also asked the districts to arrange adequate tarpaulin, and water pouches and keep relief materials ready at various strategic locations. It has also asked power, irrigation and PWD authorities to keep their quick response team ready for any emergency situation.