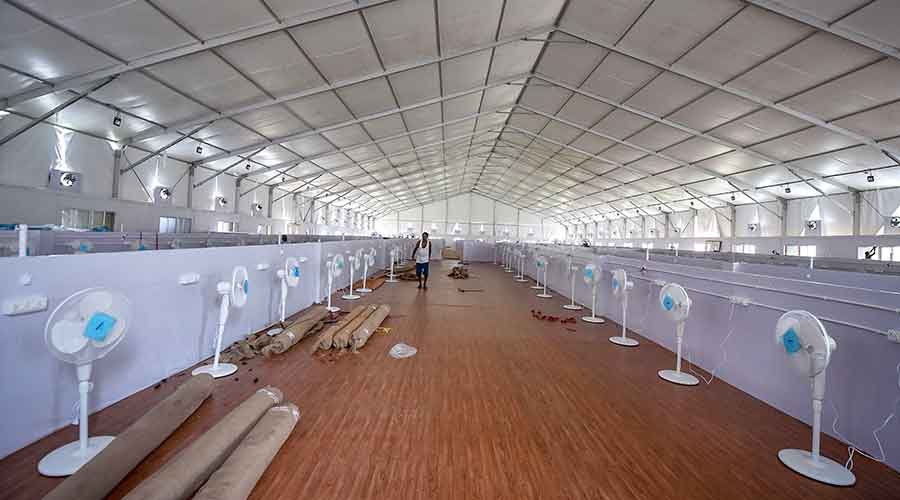 The Bengal government has asked all hospitals and nursing homes to set up isolation wards for suspected Covid-19 patients and make sure that their condition is stabilised before transferring them to medical facilities dedicated to treat the disease.

The advisory has been issued after it was found that a number of patients were dying while on transit to dedicated Covid hospitals from medical facilities where they had been initially admitted.

Sources said the health department had found that 30 to 35 per cent Covid deaths were taking place after hospitals were releasing critical patients as soon as they had tested positive for the disease.

“There are 84 dedicated Covid hospitals in the state. All other hospitals, where patients are being admitted with other ailments but later found Covid positive, were releasing patients even if they remained critical,” said an official.

As there is a rush to dedicated Covid hospitals, particularly in Calcutta, admission of patients was often getting delayed. “Many of the critical patients could not survive because of the delay and travel to dedicated hospitals. That is why the advisory was issued,” said an official.

The department has explained how hospitals and nursing homes can stabilise Covid positive patients before referring them to dedicated hospitals.

“Every hospital has been advised to arrange isolation ward for suspected Covid-19 patients and stabilise them before any transfer to the dedicated Covid-19 hospitals... A referral case summary should be attached during transfer out of the patients,” reads the advisory.

Sources in the health department said there were complaints of some nursing homes and hospitals releasing critical Covid patients citing they did not have required infrastructure for treatment. There were also complaints of Covid patients being discharged even though they needed medical attention.

The experts from the protocol monitoring team deputed by the health department found the allegations to be true after visiting some of the healthcare establishments.

“According to the advisory, all nursing homes and hospitals would be forced to give primary health support to the positive patients and it would help in reducing the number of deaths,” said a source.

“We have received reports that some people had died after they had returned home after being discharged by the hospitals,” said an official.

“With this advisory, no hospital will be able to release Covid patients without securing admission to a dedicated hospital,” said an official.

A bureaucrat said the model was successfully implemented in Delhi where daily death rate could be brought down to below 10 recently from over 100 daily a few weeks ago.