Tribal ire over too few buses in Purulia and Bankura 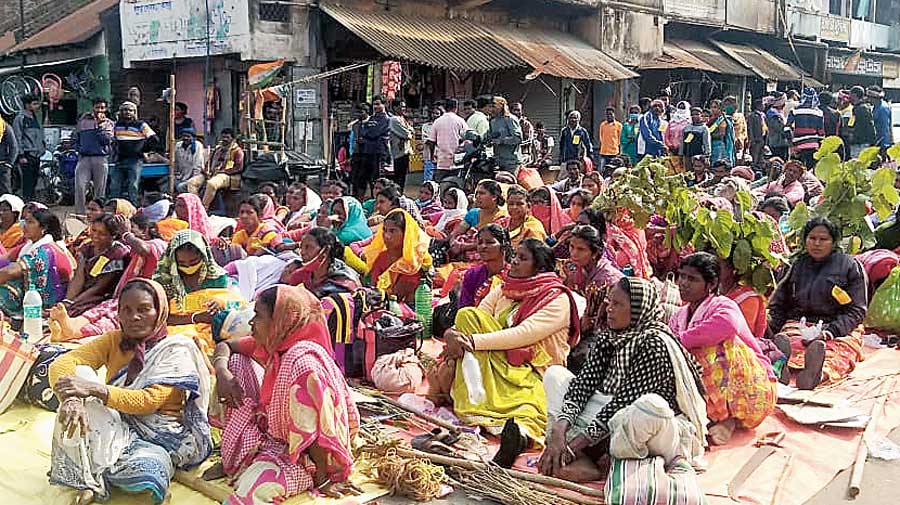 Tribal protesters block a road in Bankura’s Raipur on Sunday, alleging that the state transport department did not arrange enough buses to take them to a rally in Calcutta
Telegraph picture
Snehamoy Chakraborty   |   Bankura   |   Published 08.02.21, 01:54 AM

Tribal community members from Purulia and Bankura districts on Sunday blocked roads in at least half a dozen locations to allege that the state transport department had not given them the required number of buses to reach a rally in Calcutta.

Protesters slated to reach the rally to demand the codification of a tribal religion — Sari Dharam — for the 2021 census claimed that less than half the 795 buses they had requisitioned in advance for the event were given to them from Saturday night onwards.

“State government sources claimed that most buses had to be sent for the Prime Minister’s Haldia rally, but we do not believe them. This was sheer negligence (on their part),” said one protester.

Sunday’s rally was organised by the Sari Dharam Code Committee, a congregation of more than 17 tribal forums, and coincided with Modi’s visit to Haldia.

“We started waiting for the buses from Saturday night, but after more than half a day of waiting and sleeping in the cold, only 350 buses came,” said Shib Shankar Soren, a member of the code committee. “There was major miscommunication on the part of the transport department, which did not inform us about their inability (to provide the required number of buses). Else, we would have arranged alternative transportation.”

Protesters blocked roads across Bankura and Purulia, the largest ones being at Raipur and Raniband, till Sunday evening to protest this “neglect” and “harassment”.

“It was sheer harassment for our supporters,” said Sangiri Hembram, a tribal leader from Bankura.

An official looking into the booking of buses for the North Bengal State Transport Corporation denied having knowledge of any such communication.

State education minister Partha Chatterjee, who attended the Calcutta rally, assured the attendees of “being with the tribal community”.