She however steers clear of mentioning the third constituent, that of the CAA which is an emotive issue for certain sections of the electorate 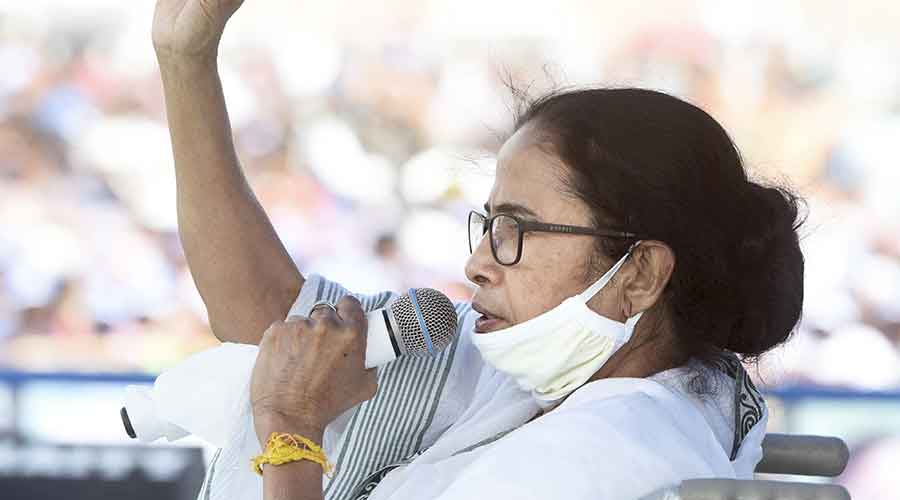 Mamata Banerjee on Thursday resurrected the Narendra Modi government’s contentious citizenship matrix as a prominent poll plank for the Bengal campaign, condemning the alleged intent behind the exercise and mounting a scathing offensive.

The chief minister, who had three rallies in West Midnapore in the afternoon, brought up the National Population Register (NPR) and the National Register of Citizens (NRC) repeatedly.

“Do remember this well. The BJP has another game plan. That is of the NPR, the NRC…. Those who work elsewhere, outside, urge all such relatives to come home for the elections and cast their votes. Why? Otherwise, they will eliminate the names of absentees and say you are discarded,” said Mamata at Keshiary, the second of her rallies.

“The way they went about it in Assam. Fourteen lakh people rendered homeless there. They will try a similar exercise here. I did not allow the NPR in Bengal, you know this very well. That entire design is to get rid of lakhs of names of valid citizens,” she added.

Mamata, however, steered clear of mentioning the third constituent of the alleged saffron design, that of the Citizenship (Amendment) Act, which is an emotive issue for certain sections of the Bengal electorate, such as the Matuas, that she has been trying to woo away from the BJP.

Prior to the pandemic taking centre stage, Mamata had been one of the loudest voices from mainstream politics in India, against the citizenship matrix. She had been a spearhead in the anti-BJP narrative across the nation, with a slew of programmes against the contentious tripod of the Modi government.

“I work here, I live here, I eat here, I get rations here, my children get educated here, I get treated in hospitals here, I cast my vote here… what do I need yet another certificate for? The BJP’s certification? Tell them to go away. Refuse their demands,” said Mamata.

With the resurrection of the issue, Mamata indicated that not only has she forgotten about the issue but would also keep revisiting it as a theme for her campaign against the saffron camp over the next few weeks.

“A rotten party infested with the corrupt. A factory of scammers, rioters, wicked, of Durjyodhons and Duhshashons…. Not one vote to them,” she added. “So many voices they stifled. So many, they killed… in the Delhi riots (February 2020), simply to subdue the protests against their citizenship plans.”

By tossing her hat once again in the citizenship matrix ring, the Trinamul chief indicated her willingness to let it assume significance in the campaign, which will help her consolidate the support from a wide range of key sections of voters — from Muslims, comprising a third of the Bengal electorate, to the Gorkhas — who are apprehensive of the exercise.

She then went on to explain why the BJP “fears” her.

“Because of the change we will bring to Delhi (the Centre), soon after we win in Bengal. They know we will pounce on Delhi. It makes them shake in fear. That’s why they are so furious with me,” said the chief minister.

“They can see that if she wins Bengal, Mamata will be a big danger for them. She will come to Delhi next. An alternative force, nationally, with everyone in it, will be created…. That is why they are trying to inundate Bengal with fear,” she added. “They don’t know me well enough.”