Advertisement
Home / West-bengal / Bengal and the whirring of violence

Why has bloodshed, or the persistent threat of it, become endemic to politics in the state? 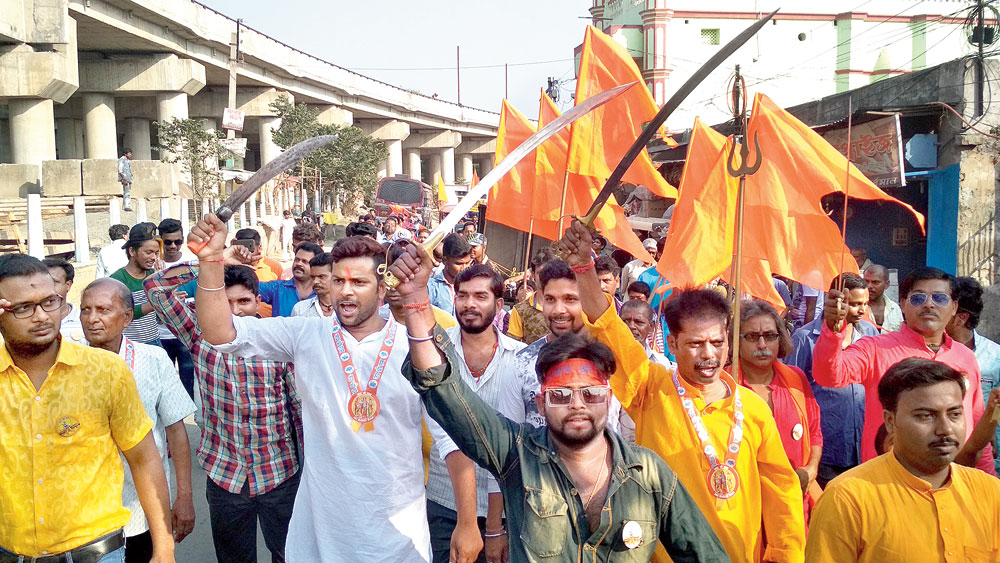 Rana works with the Pratichi Institute, a Calcutta-based academic centre

The middle-aged woman who got the door of a one-room tenement in Jadavpur Lok Sabha constituency was kindness personified. She didn’t enquire about my identity or purpose of visit; instead she offered me a glass of sherbet. “We do not have Pepsi at home, but it is very hot, please have the sherbet,” she said to me. It was indeed very hot; as I emptied the tall glass in a long gulp she asked, “Should I fetch you some more?” I asked her what made her extend such warm hospitality to a complete stranger at her doorstep. She looked perplexed. “Whatever your purpose, you have come here in this heat, and it is our dharma to offer water.” Her response left me confused. Just two hours ago, I had seen her in the neighbourhood market, leading a group of women armed with brooms and bamboo sticks.

The group of women were protesting a CPI(M) candidate’s electoral advertisement in that particular constituency. They literally swept his supporters out of the area. “We were told that they will evict us from our settlement,” the woman told me. There is some sort of a legal issue over the plot on which they have built their humble tenement. She said, “If we had not stopped the other party’s campaign, we would have been evicted by the present leaders.”

I understood the impetus that had brought about the transformation of this compassionate person into an aggressive public face. The same evening I had a chat with a local leader of the Trinamul who had played a role in organising the women’s protest. He candidly offered, “The protest was not organised against the CPI(M). It is my own partymen who were the targets. I cannot lose an inch of space; otherwise I will be ousted from the scene.” His anxiety was echoed by a gram panchayat pradhan of Birbhum: “Look, I have 5,000 votes under my control. I have to keep my dominance intact. How can I do that? The easiest way is to frighten people, and the way to do that is to make the opposition your target. Frighten them, kill one or two of them if necessary, and everything will be under your control.”

In Bengal today, it is not the ruling party alone that resorts to electoral violence. Violence has been terrifyingly demonstrated by Opposition parties too, especially the Bharatiya Janata Party (BJP). Wielding a machete or a sword in public, and incessant threats of physical violence issued by the BJP state president have had an impact on the lower rungs of the party. The Left Front, which used to depend more on state and party machinery and resorted to covert violence, does not have an active role in the violence-centric political process today.

Many policies in the initial Left Front years contributed to limiting the incidence of violence, the difference between the potential realisation and the actual somatic and mental realisation. It showed signs of recovery from the terrible state of West Bengal politics and society under Congress’s Siddhartha Shankar Ray’s rule.

Journalist Ranajit Ray wrote about those years, “a spirit of violence and iconoclasm… seized the state. Life has become cheap, and murder has become the chief sport”. He wrote in his 1972 book, The Agony of West Bengal: A Study in Union-State Relation, that some members of the All India Congress Committee, who “mourned the murder of democracy in the state” submitted to the Congress high command. The book read: “It would be impossible to prove the rigging of elections in a court of law. Still, it can be said without hesitation that politically conscious people are hanging their heads in shame for being deprived of the right of franchise by terrorist and other methods.”

The old land-based economy was falling apart, leading to the loss of control of traditional rulers, the main base of the Congress. In order to retain control, Ray had to choose either a radical reform in the political economical programmes or resort to violence; he opted for the latter.

The situation in Bengal of the early 1970s fit perfectly with the general description of structural violence that John Galtung, who coined the concept, wrote in his path-breaking 1969 paper, “Violence, Peace, and Peace Research”. Galtung related structural violence to uneven distribution of resources, income, education and healthcare, and above all, the power to decide this distribution. “The situation is aggravated further,” he added, “if the persons low in income, are also low in education, low on health, and low on power as is frequently the case because the rank dimension tends to be heavily correlated due to the way they are tied together in social structure.”

The Left Front, which gave peace a different meaning — emancipation of the vast masses from the shackles of past social, economic, political and cultural bondages — fell short of reinventing ways to further the emancipatory process. Rather, it found itself imprisoned in a convention that systematically unleashed structural violence on people.

The power-based identity it chose resulted in the birth of a new order. Failure in education, health, employment, and not utilising the opportunity of advancing dialogic social processes through the gram sabhas and other public platforms led it to retain power through local mansabdars, often coming from the social strata that was far too regressive in social outlook.

The discarding of a process of building quality leaders, which required both expansion of general education and moral political training, gave way to the grabbing of local political power by figures with vested interests. Nevertheless, the Left Front’s political organisational discipline gave it some control over the local mansabdars and managed, to an extent, to stop them from making “primitive accumulation” by looting the public exchequer.

But, as soon as the Trinamul challenged the Left Front with might, many who were short of moral political commitments swiftly switched loyalties. Both the Trinamul and the BJP, however, have their old social bases, and the newly baptised are required to prove their relevance. This has added to the conundrum, wherein the ability of organising terror and control become a pre-requisite for upward political mobility. In a situation where opportunities of economic entrepreneurship have ceased and politics has become a field of entrepreneurship, thus making the distinction between business and politics redundant, investing in oneself’s upward mobility in the field of party-politics is the thing to do.

The authoritarian composition of the Trinamul, despite arousing hope among the masses, never allowed it to adopt a new political course. The redistribution programmes adopted by the Trinamul government lacked a holistic approach. Also, owing to its suspicious nature, the party could never trust the people; rather, it has increasingly chosen a path of exacting loyalty by means of coercion.

The party’s local chieftains have added complexity to the dynamics. Many of them belong to that section of middle-caste Hindus who were considered untouchable but managed to move up the caste ladder through economic mobility. Many of them are opposed to moral politics. This section earned their “touchable” status through economic mobility, and this led to their constructing a different — money based — cultural-moral world. (The Bengali ruling class, the Calcutta-centric upper-caste Hindus, had never tried to spread education or extend the fruits of Bengal Renaissance to them. This created a kind of inequality.) Today, local chieftains from this background, seem to be more focussed on collecting their money’s worth for their political services — they tend to pocket money from government schemes, involving various legal, quasi-legal and illegal trades. The shift in social control in politics is proving most beneficial for the BJP, as it finds in the obscurantist controllers of society their best ally.

The circle of violence looks complete now. With the BJP’s entry into the competition, a third form of violence — cultural violence — is fully operational. It draws from the most regressive of ideologies, namely religious bigotry, nationalistic narrowness, caste-related separation, and gender oppression, and takes the form of terrible physical violence. It is also the convenient form of organised violence. While structural violence and resultant physical violence can be restrained, it is impossible to stop people fighting as gladiators in the name of religion, caste, nation or ancient heritage.

As to whether the state can curb political violence, that is contingent upon rational political outfits and social agencies and their ability to mobilise the common people against all forms of violence — structural, cultural and physical.