Both sides started taking credit, claiming the support of the state and central government, respectively, as the DM and policemen stood on the spot 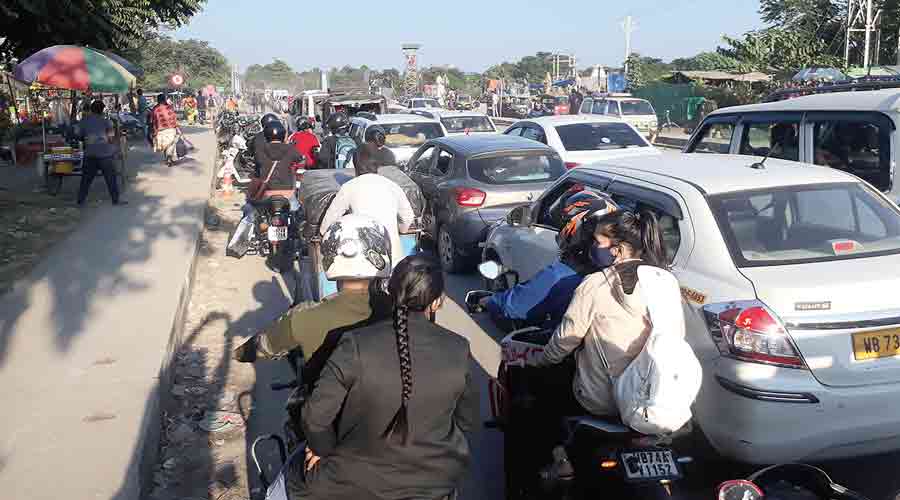 Politics took the centre stage at the reopening of the Balason river bridge on northwest Siliguri on Friday as rival Trinamul and BJP leaders and supporters sought credit for the installation of the Bailey bridge that facilitated the resumption of traffic along the route.

The drama unfolded at the site as Darjeeling DM S. Ponnambalam reached the bridge with senior policemen to formally reopen it.

A number of Trinamul leaders and hundreds of party supporters reached the spot. So did a group of BJP supporters led by Anandamoy Barman, the BJP MLA of Matigara- Naxalbari, the Assembly constituency in Darjeeling district where the bridge is located.

Both sides started shouting slogans in support of the state and central government, respectively, as the DM and policemen stood on the spot.

As some Trinamul leaders walked towards the bridge with the DM, the MLA objected. Police asked him and his supporters to move to the side of the road.

An agitated Barman said being the MLA, he had every right to be at the spot.

He said central agency NHAI, not the state government, paid for the Bailey bridge and that NHAI funds are being used for the diversion, the work of which is on.

“The Centre has also allotted funds for two new bridges, each of which would have three lanes, over Balason river. Funds to the tune of Rs 1,200 crore have been sanctioned for widening this stretch of NH31. Trinamul leaders, who are not even elected representatives, have no business here,” said the MLA.

The district magistrate invited the MLA to join the bridge reopening event to which Barman conceded after some time.

Trinamul leaders also stood with the DM and police. Eventually, the ribbon was cut and the bridge was opened for traffic.

Both sides, however, continued shouting slogans.

Later, district Trinamul leaders took a dig at the BJP.  “It is unfortunate that they tried to create tension. Reopening of the bridge for traffic left thousands relieved. It is because of the chief minister’s instructions and initiatives of the state PWD that the Bailey bridge has been readied within one-and-a-half months,” said Alok Chakraborty, chairman of the Darjeeling (plains) district Trinamul.

Since October 20, vehicular movement along the bridge on NH31, one of the important highways that connect parts of north Bengal and the northeast with the rest of the country, was disrupted after one of the pillars of the bridge tilted under the impact of the swollen Balason river. It prompted  both the NH-IX division of the state PWD and the National Highways Authority of India (NHAI) to act. It was decided that a Bailey bridge would be installed along the damaged portion of the bridge and a diversion created through the river bed, parallel to the bridge for movement of more vehicles.