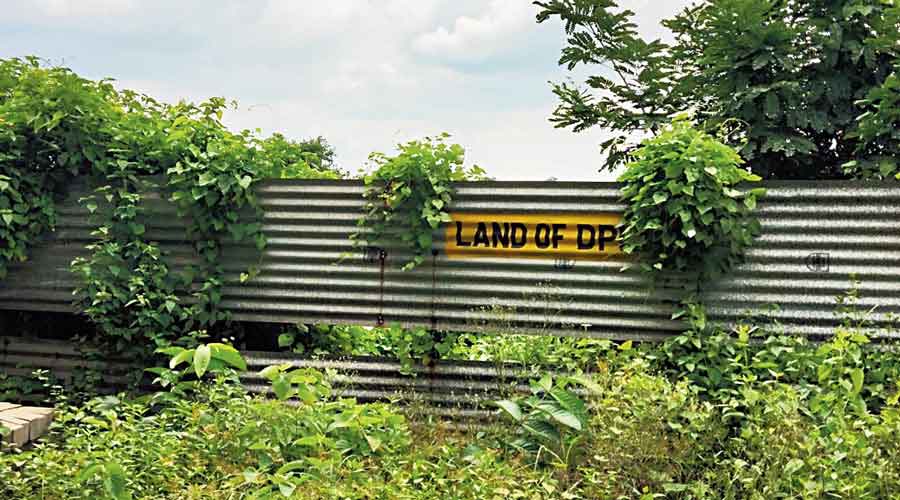 One of the land parcels at Bidhannagar in Durgapur that the DPL has claimed. The ADDA in 2008 had allotted the 22-acre plot to a private company for an IT Park. The company returned the land to the ADDA citing economic reasons.
Anusuya Sinha
Abhijeet Chatterjee   |   Durgapur   |   Published 12.07.21, 01:27 AM

The Durgapur Projects Limited (DPL) authorities have found that nearly 950 acres owned by it had been, without its approval, allotted to various agencies by the Asansol Durgapur Development Authorities (ADDA) during the Left Front regime.

This came to light after the power utility started taking stock of its 3,759 acres, as the Trinamul government decided to either sell off or lease out the unused land of the loss-making company as part of its restructuring plan.

Sources in the DPL said the land “occupied” by the ADDA was located at the Bidhannagar and Fuljhore mouzas of Durgapur town, where private schools, colleges and a hospital have come up in the past decades.

“We have put up our boards on the land occupied by the ADDA, stating that the land belongs to the DPL. We have also informed the government,” said a DPL official.

DPL officials, however, said it was not possible to demolish the schools, colleges and the hospital to free their land as these have been around for years.

“We can claim an amount from the ADDA or the price they received from agencies during allocation of the land. We are estimating the value and working on it,” said a DPL official.

The DPL has earmarked around 50 acres of land in Bidhannagar, where the Left Front government had proposed an IT park.

“Two IT companies have come up on 8 acres while the remaining 22 acres are still vacant after the company to which the ADDA had allotted the land returned it to them for economic reasons. We have put up boards saying the land is ours,” said a DPL official.

Now, these allocations could cause further trouble for the state government in selling off or leasing out unused land, said sources. It is still not clear how the state would go about the “irregular” hand-over of plots done by a government agency.

Former chairman of ADDA Bansagopal Chowdhury, during whose tenure the land was allotted to various agencies, asked why the DPL was raking up the issue after so many years.“Why did the DPL not raise the issue earlier? I did not steal the land for my personal reason, everything was done publicly. What was the DPL doing at that time?” he asked, adding both the DPL and ADDA are government organisations and the matter could be resolved.

“The matter can be easily solved by the government, as both the organisations are under it,” added Chowdhury.

Sources in the land department said that the entire land in Durgapur and its adjoining areas, excluding the privately owned plots, belonged to the Durgapur Development Authority (DDA) or the Industrial Board during the 1950s. The DDA transformed into the ADDA later.

“The land that the DPL now claims was either of the DDA or of the Industrial Board. The land might have been transferred to the DPL during its formation in 1961, but perhaps the record was not updated properly and there was maybe a communication gap,” said an official.