Arsalan gets bail, brother in custody

The bail, however, came with a clutch of riders 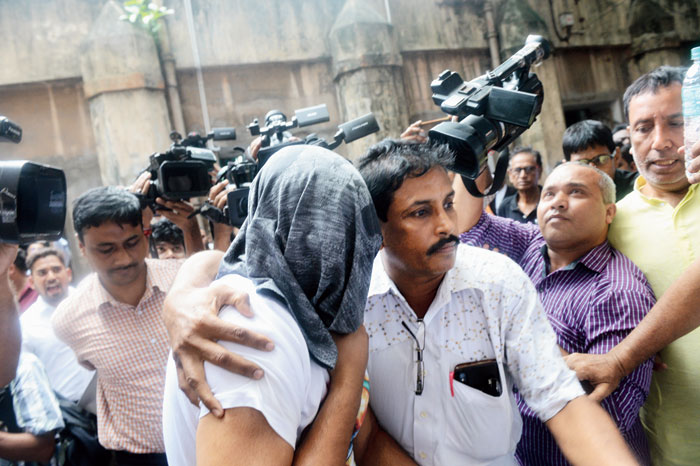 The courtroom, where the Jaguar crash case was heard on Thursday, told a tale of two brothers who stood separated by the day’s verdict and the colours they wore even though they sat side-by-side on the bench for the accused.

The contrast was hard to miss even for the not-so-observant onlooker present in the Bankshall court’s courtroom.

While Arsalan Parwez, 21, sat wearing a black round-neck tee with “The Godfather” emblazoned on it, next to him was his elder brother Raghib Parwez, 25, in a white T-shirt.

It was 2.50pm and the court proceedings had just begun. All eyes were on the two young men and covering the duo from the curious glances of the courtroom crowd was the third accused in the case, Mohammed Hamza, who also happens to be their maternal uncle.

Hamza in a blue shirt was shades away from black and white tees his nephews wore.

At the end of nearly two hours of hearing, when the chief metropolitan magistrate, Dipanjan Sen, granted bail to Arsalan and Hamza and remanded Raghib in police custody till September 3, the brothers stood up and shared glances.

The younger one then led the three out of the enclosure and walked up a flight of stairs as the crowd started thinning out of the courtroom.

The bail, however, came with a clutch of riders. The two — Arsalan and Hamza — were told to furnish individual bail bonds of Rs 5,000 each. They were told to meet the investigating officer of the case whenever called for and submit their passports.

On Wednesday, officers from the detective department of Calcutta police had arrested Raghib after it emerged that he was at the wheel of the Jaguar and not Arsalan.

Raghib fled to Dubai within hours of crashing his Jaguar into a Mercedes at the Theatre Road-Loudon Street crossing around 1.50am on Saturday last, leading to the death of two Bangladeshi bystanders.

The 25-year-old returned from Dubai on Monday and was arrested in front of a nursing home in Beniapukur on Wednesday where he had got himself admitted, allegedly to evade arrest.

Hamza was later arrested for providing him shelter before he left the country.

Earlier, the police had arrested Arsalan after Hamza told investigators that the 21-year-old was at the wheels of the Jaguar on the fateful morning of August 17.

But later, CCTV footages from the house of the Parwez’s Beckbagan residence revealed that Raghib, and not Arsalan, had left the house around 11pm on Friday in his Jaguar.

Though Arsalan and Hamza have walked out on bail, the duo continue to remain accused in this case. Arsalan is accused of screening an offender and Hamza of harbouring Raghib.

“The primary case is that of culpable homicide not amounting to murder with the knowledge that if a particular act is a committed it can lead to death. Raghib now stands charged under this section,” said an officer of the detective department.

“But his brother and his maternal uncle are not absolved of the case. Their involvement in this criminal case, remain.”

For several family members and close relatives of the Parwezs, who had turned up at the court, it didn’t matter much. At least of one of the two brothers was out on bail and back home.

“Let us put it that we are happy with the order. Bus, aur kuchi nahi (That’s it. And nothing else)” said Arsalan’s uncle Z.A, Khan.

All through the court proceeding he chose to speak only to Arsalan.

On his part, Arsalan stood up only once when Avijit Chattopadhayay, the public prosecutor, told the judge that the police wanted to charge him under section 201 of the IPC for screening an offender.