The robbers, whose faces were covered by either muffler or large sized masks, entered the bank near Curzon gate in Burdwan town as soon as the branch opened 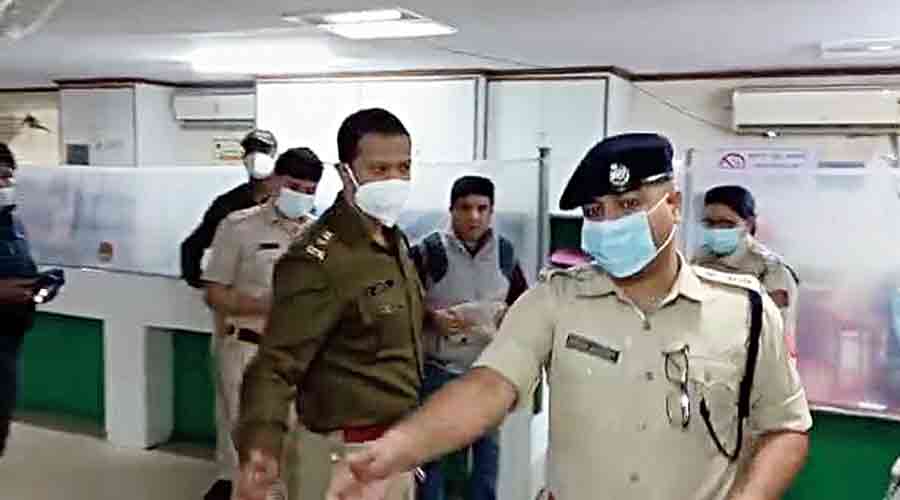 Investigators inside the bank in Burdwan town after the robbery on Friday.
Munshi Muklesur Rahaman
Snehamoy Chakraborty   |   Bolpur(Birbhum)   |   Published 22.01.22, 01:38 AM

A gang of seven armed robbers raided a nationalised bank in the heart of Burdwan town and looted around Rs 34 lakh from the vault while holding employees and customers at gunpoint on Friday morning.

According to eyewitnesses, the robbers, whose faces were covered by either muffler or large sized masks, entered the bank near Curzon gate in Burdwan town as soon as the branch opened for customers.

The gang members held bank officials at gunpoint and directed all customers to handover their mobile phones and squat on the ground.

“The criminals were shouting for the keys of the vault and one of the employees handed over the same. The gang decamped with the cash,” said a customer.
The robbery raised questions on the security of banks even in broad daylight.

“We have formed a special investigation team to probe the robbery. Raids are on to arrest the culprits as soon as possible. The robbers looted around Rs 34 lakh from the bank’s vault,” said Kamanish Sen, the East Burdwan police chief.

In July last year, one person was shot at by robbers at a branch of a gold-loan providing agency in the heart of the Burdwan town.

“Burdwan is a very busy town and it has become crowded since the morning. It is a threat not only for the banks but for locals as the security of the town is under stake,” said a person.

Police said they have taken all the tip offs from the bank employees about the behaviour of the robbers and described what they observed during the operation. “We have already checked within when we were informed about the incident. We are trying to find out,” said a police officer.

A police officer said the robbers probably kept their bikes away from the branch and entered the bank on foot. Police are tracking all available footage of CCTV cameras to identify the gang.