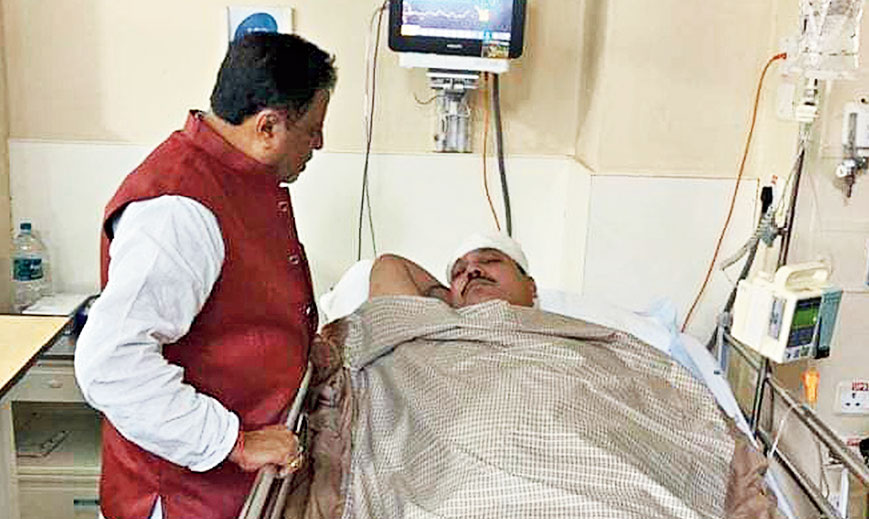 BJP MP Arjun Singh suffered head injuries on Sunday when he was hit by a brick during a clash between BJP and Trinamul supporters in Bhatpara, part of his Barrackpore constituency in the North 24-Parganas district.

The BJP has called a dawn-to-dusk bandh on Monday in the constituency against the attack. The incident underscored the fact that the turf war in the area continues unabated since the Lok Sabha elections in May when Singh won the seat on a BJP ticket after having switched from Trinamul earlier this year.

The clashes occurred when some Trinamul supporters and a police team were trying to remove a blockade that the BJP supporters, led by the MP, had put up to protest an attack on him earlier in the morning in the Kankinara area.

In a tweet, BJP leader Mukul Roy demanded a CBI inquiry and said he had apprised Prime Minister Narendra Modi and Union home minister Amit Shah of the incident.

“I was injured in police lathicharge led by police commissioner Manoj Verma,” Singh said at the Bhatpara state general hospital before he was shifted to a Calcutta hospital. Verma, the Barrackpore police chief, declined comment.

The trouble began in Kankinara when Trinamul activists allegedly occupied a BJP office, prompting a retaliation in which BJP supporters took it back soon after.

BJP sources said Singh was attacked by alleged Trinamul activists while passing through the area on way to a blood donation camp.

An eyewitness said, however, that Singh was hit by a brick a BJP worker hurled at the team of cops led by Verma, who was trying to persuade party supporters to lift the blockade. BJP workers claimed Trinamul supporters had rained stones on them.

BJP workers alleged Verma fired from his pistol in the air when the cops were using tear gas shells and batons on them. Nine cops, including Verma, were injured.

Ajay Thakur, deputy commissioner (zone-I) of Barrackpore commissionerate, denied Singh was injured in police lathicharge. “No policeman hit anyone on the head with sticks. Moreover, the batons are made of plastic and cannot cause a head injury. There was a road blockade. Officers were trying to persuade the demonstrators to withdraw. But they turned violent, threw stones and during the stone pelting, the MP was injured,” Thakur said.

In the melee, some people snatched 9mm pistol from a police officer and it is yet to be recovered, Thakur added.

for the violence. “More than 200 Trinamul offices in the Barrackpore area were forcibly occupied by the BJP. We tried to take it back. But they grabbed them again. They went inside (one such office), vandalised the room

and the furniture, and pulled down our party flags,” Mullick said.

In the Barrackpore constituency, Jagaddal and numerous other pockets like Bhatpara, Kankinara, Noapara, Amdanga and Titagarh have been on the boil since the general election results on May 23.

The political violence since then has claimed at least seven lives and left around 500 families homeless.