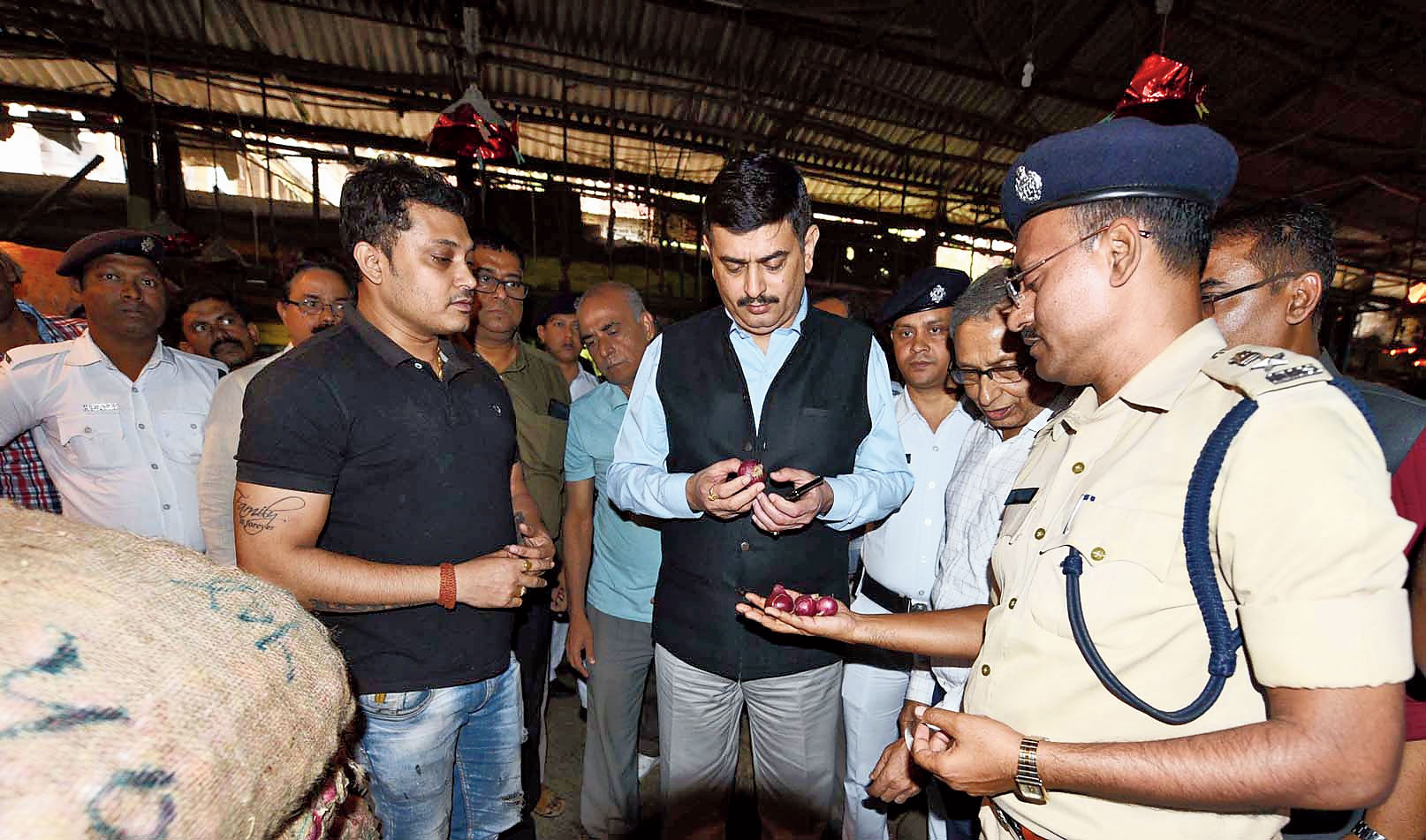 Calcutta police commissioner Anuj Sharma visited Koley Market, a wholesale hub in Sealdah, on Tuesday and enquired about onion prices, a day after chief minister Mamata Banerjee had done so at Jadubabu’s Bazar in Bhowanipore.

The police chief, like the chief minister, asked retailers about the price of onions before trying to identify a section of middlemen who were controlling the price.

Metro has been reporting how onion prices had shot up from Rs 24 a kg last December to around Rs 150 this month. The price of onions in retail markets across Calcutta hovered around Rs 130 to 140 a kilo on Tuesday.

Sharma reportedly asked his officers to run a continuous check on the challans that the wholesale traders issued quoting the price of onions. “The CP has asked us to ensure there was no hoarding of onions,” said an officer who accompanied Sharma during Tuesday’s visit.

During his 15-minute visit to the wholesale market, Sharma spoke to a few traders and asked for challans or receipts that showed the quoted price of onions when being sold to dealers and retailers. Some of the traders told him that they sold onions at Rs 80 a kg during the day, which was at least Rs 5-6 less than the previous few days, signalling a drop in prices in the days ahead.

“We are not even charging labour cost while selling onions to the agriculture marketing department for the Sufal Bangla stores,” Bishal Chandra, one of the onion wholesalers, told Sharma.

The top cop and his team entered small enclosures — made of tin sheets — where onions have been stored in rows of sacks and spoke to the dealers trying to find out why the price was not showing any sign of fall.

Mamata had spoken to a few retailers who had set up their shops on a pavement leading to the Bhowanipore market on Monday and asked for the names of the middlemen (mahajan) who sold them onions.

Before leaving, the chief minister had instructed officers accompanying her to note down the names of these men in an apparent move to send the message to traders in other markets.

“Traders explained to the police commissioner how the supply of onions in Calcutta was directly linked to the stock reaching from Nashik (in Maharashtra),” said Kamal Dey, a member of the state government’s task force who accompanied Sharma on his market visit.

Throughout Tuesday, onions sold at Rs 130 to Rs 140 a kilo across several markets despite wholesalers assuring that the price would drop soon because more trucks from Nashik have started reaching Calcutta.

“Against 10 to 12 trucks, we now have a steady flow of over 20 trucks carrying onions from Nashik,” said Dey.

“The effect of this supply would be felt in the next few days.”