Stones were allegedly thrown at the security personnel and in turn, protesters were baton-charged 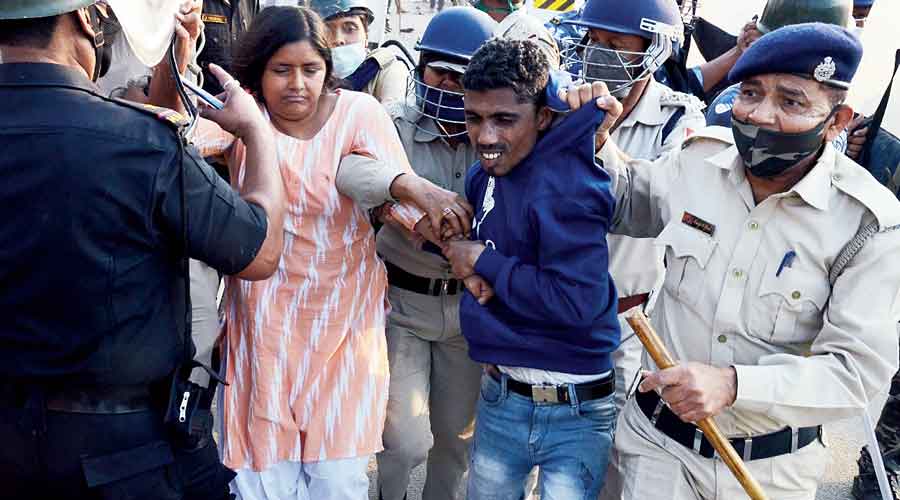 DYFI state secretary Minakshi Mukherjee (left) being taken away by the police from the protest rally at Panchla in Howrah on Saturday.
Telegraph photo.
Arkamoy Datta Majumdar   |   Calcutta   |   Published 27.02.22, 01:46 AM

A protest rally by Left-backed student and youth organisations, including the SFI and DYFI, seeking justice for deceased student leader Anis Khan turned violent in front of the office of superintendent of police (Howrah rural) in Panchla on Saturday.

Both the protesters and police traded charges of violence.

Police claimed that stones were pelted from the  protest rally and police vehicles vandalised.

On the other hand, agitators claimed their peaceful protest was attacked by cops and local Trinamul Congress goons without provocation. Sources said several protesters, including DYFI state secretary Minakshi Mukherjee, were arrested and six of them had to be hospitalised. A police officer said 17 protesters had been arrested.

“The police fired tear gas shells at us from one end and Trinamul goons hurled bombs from the other,” alleged SFI national general secretary Mayukh Biswas. He also alleged that women protesters had been “attacked” by male police personnel.

Refuting the charges of police highhandedness, Siddh Nath Gupta, the additional director general of police (South Bengal), who visited Panchla in the evening, said: “Eight policemen have been injured and nine vehicles vandalised by the protesters. We had to fire nine tear gas shells to bring the situation under control.”

Earlier this week, the agitators had demonstrated outside the police station of Amta — where Anis lived — and had set a deadline of five days for the police to arrest the culprits involved in the alleged murder of the student leader.

“As the deadline for this expired on Friday and the real culprits were yet to be arrested, the students and youth organisations of the Left-backed organisations had given a call for Saturday’s protest march in Panchla,” said a DYFI leader.

Around 3pm on Saturday, senior SFI and DYFI leaders and supporters gathered at the Ranihati crossing at Panchla in Howrah.

After a brief roadside meeting, the rally started to march towards the office of SP (Howrah rural).

The rally was stopped near the SP office and a scuffle broke out between the agitators and policemen.

Stones were allegedly thrown at the security personnel. In turn, protesters were baton-charged.

DYFI leader Mukherjee, along with a few others, was dragged away by the police and later arrested.

Reportedly, when the protesters hit back, the cops were outnumbered. They had to rush into the SP’s office and shut its main entrance.

As stones came flying into the office premises and damaged parked vehicles, the police rushed out and fired tear gas shells to disperse the crowd. Unsuccessful attempts were  made to torch a couple of vehicles. The police claimed some important documents got burnt in the process.

SFI and DYFI leaders, however, claimed that stones had been hurled at them by the police, who tried to provoke a “peaceful rally”.

“We have reports that local Trinamul leaders had planted goons in the rally who pelted stones at us,” Bhattacharya, who suffered injuries during the protest, said. “We also demand unconditional release of those who have been arrested at Panchla,” he added.

To protest against the “attack in Panchla”, SFI and DYFI activists will lay siege to rural police stations across the state on Sunday and Monday, Srijan said.

Speaking on the sidelines of a Left Front rally demanding justice for Anis in Calcutta on Saturday, Left Front

chairman Biman Bose condemned Saturday’s “attack on students and youths in Panchla”. “They are trying to throttle the voices of protest as

they have no answer to the questions that are being raised by students and youths over Anis’ murder,” Bose said.