Autonomy of the Anglo-Indian institutions may be 'in jeopardy' with the current 'approach': Amit Mitra 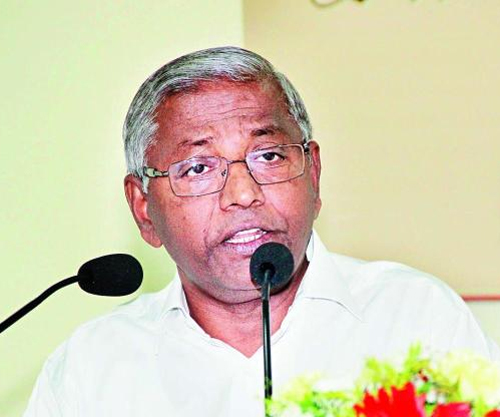 The reservation for the Anglo-Indian community in legislatures as “granted by the Constituent Assembly” is being “rather maliciously, even fraudulently” abolished, the St Xavier’s University vice-chancellor told the annual conference of the heads of Anglo-Indian schools in Calcutta on Saturday.

Father Felix Raj said it was a “humiliating development, which has disturbed our country”.

The vice-chancellor was the keynote speaker at the annual conference of the Heads of Anglo-Indian Schools in India at Loreto House, hosted by the Bengal branch of the association.

Chief guest and Bengal finance minister Amit Mitra expressed his “concern” and said the autonomy of the Anglo-Indian institutions may be “in jeopardy” with the current “approach”.

“My concern is that the minority institutions’ autonomy may be, in the future, in jeopardy. I am very worried that your autonomy, your independence, starting with this approach --- I hope (it) will not be affected. Because once your autonomy and independence is affected, what you produced for society will not get produced. It will all get standardised into some other agenda. That really worries me,” Mitra said.

Father Felix Raj said: “It is very disappointing. It is in fact a humiliating development, which has disturbed our country: not only the Anglo-Indian community but also other communities. The reservation for the Anglo-Indian community in the Lok Sabha and certain Assemblies, granted by the Constituent Assembly, is being rather maliciously, even fraudulently, abolished.”

He added: “The Anglo-Indian community is the only community that has its representation in the Lok Sabha. It was done by the first Prime Minister of this country, Jawaharlal Nehru, with Mr Frank Anthony because the community had no native state of its own.”

Addressing the heads of more than 150 schools, Father Felix Raj spoke of an “environment of insecurity”.

“It (the plan to abolish the reservation) has created an environment of insecurity among all minorities as well as among the Christian community. We need to make inroads…. I think we need to (take up) constructive measures, find ways of taking this up in the community as well as in the larger Christian community. Make representations so that something can be done in this direction,” he said.

Chief minister Mamata Banerjee had at the inauguration of the Calcutta Christmas Festival last month referred to the Centre’s move to do away with the parliamentary seats reserved for the Anglo-Indian community.

Father Felix Raj said he had been told that 4 lakh Anglo-Indians lived in India and that Calcutta had the largest Anglo-Indian community, one of 30,000.

“The community in the past and even now has been forced to endure a lot of hardship. You know it better. And the hardship still continues,” he said.

He spoke about the contributions the community had made in various spheres such as education, railways, the armed services and sports.

“A number of factors fostered a strong sense of community among Anglo-Indians. Their English language system, their Anglo-centric culture and their Christian beliefs in particular helped bind them together,” he said.

Mitra said his suggestion was to “work together” and “fight” to protect the reservation.

“I would suggest that we all work together to first rectify the reservation that was there for the community. And we must fight for it. Otherwise we cannot get anything…. You have to gather that data and create a condition to fight for it. Of course the political parties will fight for it but it must come from you,” he told the principals.

He said there was a need to “think critically and carefully” about how you can “protect your autonomy and produce people of quality”.

“Wherever you go, you meet people who came from Anglo-Indian schools (and) who today have excelled in the world. They have done so because you gave them the freedom. We have to be cautious in the new atmosphere in the country and each one has to make a contribution towards preserving our Constitution,” Mitra said.