Advertisement
Home / West-bengal / And then there were None

And then there were None

An intimate memory of a precious intimacy 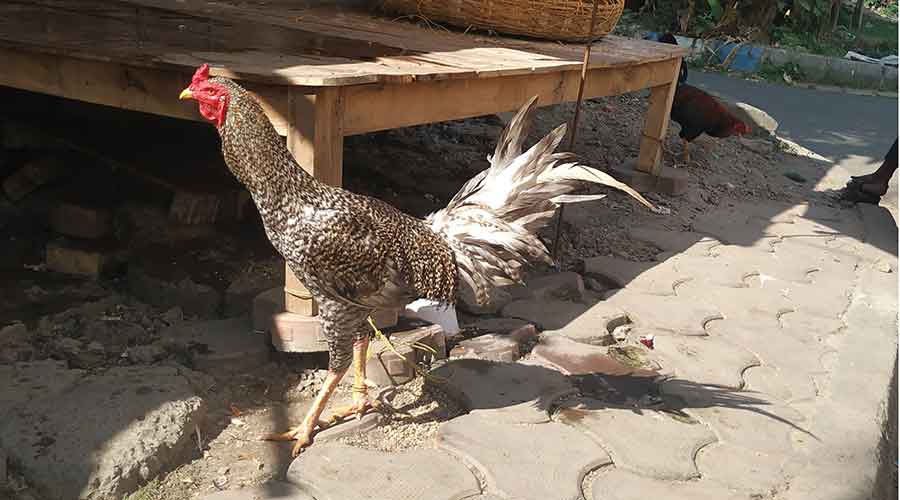 Nimai Bagh ran a small tea-stall in this south Calcutta neighbourhood, a shop that grew its roots much before the malls and residential complexes sprouted.
Paromita Kar
Paromita Kar   |     |   Published 16.05.21, 12:51 AM

He had adopted them around October last year, about eight of them, all strapping roosters. By February they were gone, given away to those who could afford to feed them. Then in April, Nimaida himself crossed over to the other world. And a corner of this one turned empty. Those we think ordinary and pass by also have stories, often the best ones; untold, they turn to losses we never care to count.

Nimai Bagh ran a small tea-stall in this south Calcutta neighbourhood, a shop that grew its roots much before the malls and residential complexes sprouted. Made of split bamboo boards and topped by thatch, his establishment looks like any other nondescript tea shop, except that it isn’t. A large window allows one a full view of the earthen stove, a huge hanri of milk that used to be on the boil always, two polished kettles, jars of somethings — some sweet, some savoury. 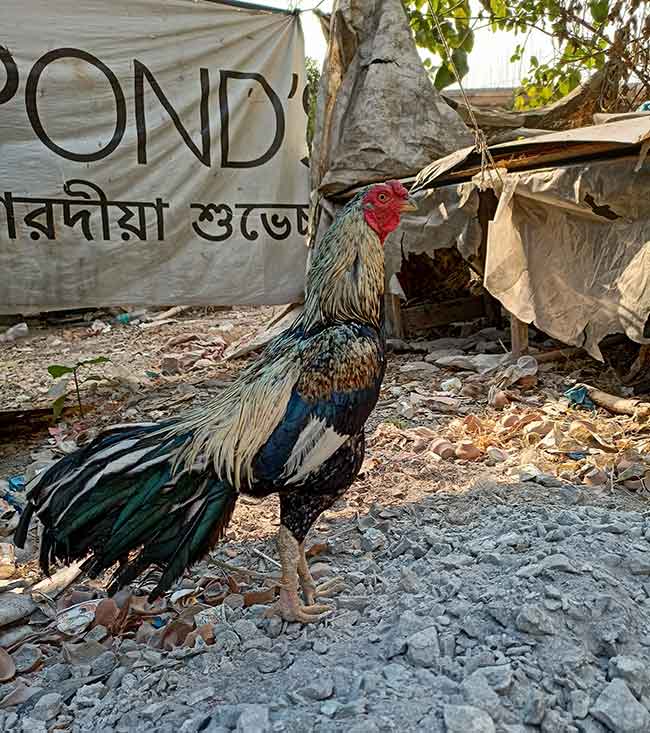 But beyond the hearth lay a thousand and one things. Buckets and utensils neatly arranged on wooden benches, and underneath too, old machine parts, exhausted tyres, a couple of solar batteries with wires oozing out of every inch, hurricane lanterns, a fishing basket hung on one wall, a niche for the gods. All of it seemed to speak for the 70-year-old soft-spoken man, who went about life and times without much ado. In fact, he was like the chronicle that was never printed. We would often call him the Morog Man.

It wasn’t unusual that Nimaida decided to bring home the roosters. His shop had remained relatively unfrequented during the months of the lockdown. The garrulous creatures filled out the time and the engagements that had fallen vacant. After all, they were fighters, having displayed their prowess in battlefields far and near. A couple of them even came with gnashes that needed special attention. But their keeper knew how to stitch them up and the kind of protein-rich diet they required, and would also coo to them. 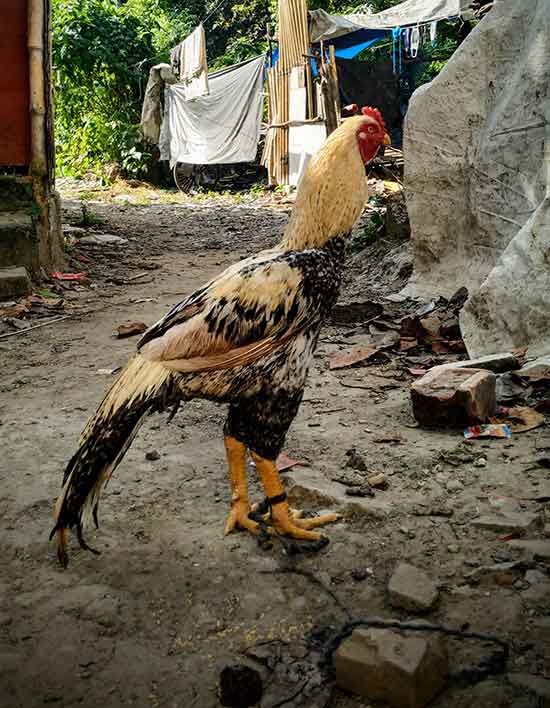 Each magnificent morog (rooster) had its spot under the sun — tied to a pole or tree, at a safe distance from the others — a name and tale of its own. Their constant crowing and glistening plumage ensured all was well.

“My favourite used to be the spotted one, Mayuri... That one was very clever and obedient; he would look right into my eyes when I called out his name. ‘Do you want to eat now,’ I’d ask. And he would nod vigorously!” Nimaida had once said as I sat there sipping a cup of sweet, strong tea. It was not often that the man spoke about himself, much less about his precious birds.

That morning, the old man was hunched over his bonti, peeling and chopping drumsticks. “My nephew climbed up the tree today; he gave me some and took home some,” he said. Nimaida spoke of the moringa tree that stood behind his shop like it were an old mate. If one stepped into his little backyard, one would find more crammed vegetation. A thicket of seem (flat beans) vines that sheathed much of the roof — “there was very little fruit this year though” — with a gaunt strand of pui saak (Malabar spinach) resting in between. An emaciated lemon tree that barely ever bore a flower. An earthen pot holding a few sprigs of thankuni pata, the medicinal herb that works wonders in stomach disorders. Not long ago, Nimaida had acquired the companionship of a mongoose too. It moved around restlessly in its cage until one night it escaped to a much bigger playfield. 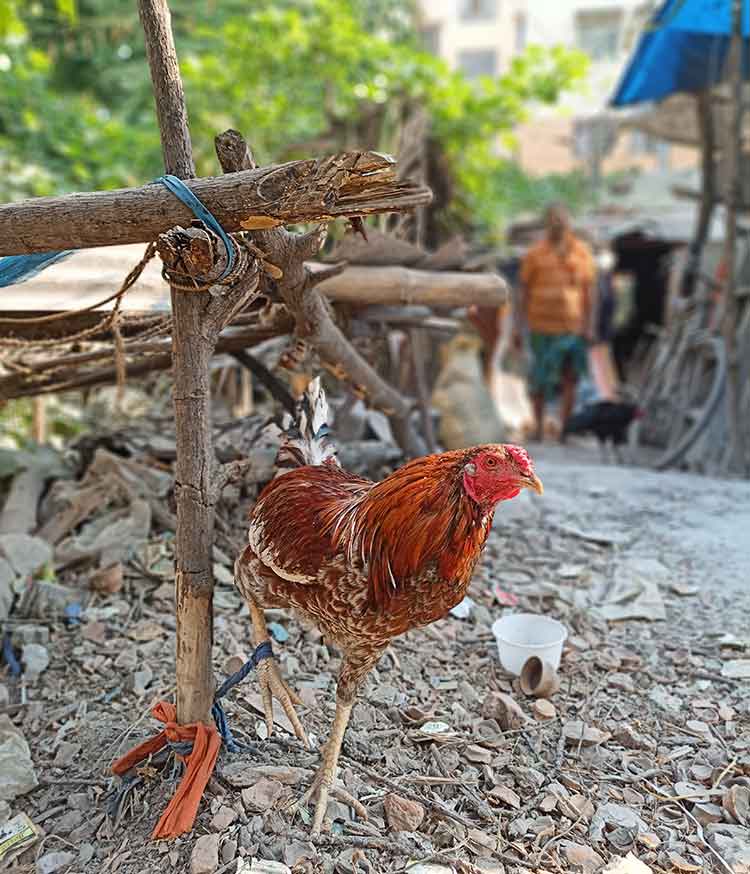 The drumsticks are more than mature, quite ripe actually, I observed. “They will be just right for my machher jhol,” he said. I ventured some more, talking about the importance of vaccination against the coronavirus. “Biddey thekey amar buddhi boro — I haven’t read books, but I believe I am not short of wisdom,” he replied, in no uncertain terms. “The disease is affecting the rich mostly, very few among the poor have been felled. I’m not boasting but I’m good the way I am. I slog in the heat all day long; corona will be afraid to come near me.”

Just then a stately black rooster sauntered in. But seeing an unfamiliar person, darted off in the other direction, squawking furiously. “Kaali is the only one I have left; I didn’t have the heart to give him away,” said Nimaida. With a bit of prodding, he mumbled, “How could I keep them? They were expensive creatures, their food and medicines cost a lot. I don’t quite understand the business of cockfighting, so I could never be sure if a bird will lose or win... They used to take up a lot of my time as well. Who would look after my shop if I ran after them all day long? They are like human children — if you don’t give them food on time they will create a ruckus.”

Word got around one cursed morning that Nimaida was no more. “It wasn’t Covid,” said the woman who brought the news. “He suffered a stroke in bed... he complained of uneasiness and was gone in minutes.”

It is said roosters wear out if you look at them too much. In Nimaida’s case, that probably was not true. He may not have worn out had those creatures been following him with their sharp eyes. Perhaps one day they will join him after their battles are fought and lost.