'BJP trying to impose north Indian culture on Bengal, TMC will win with 200-plus seats' 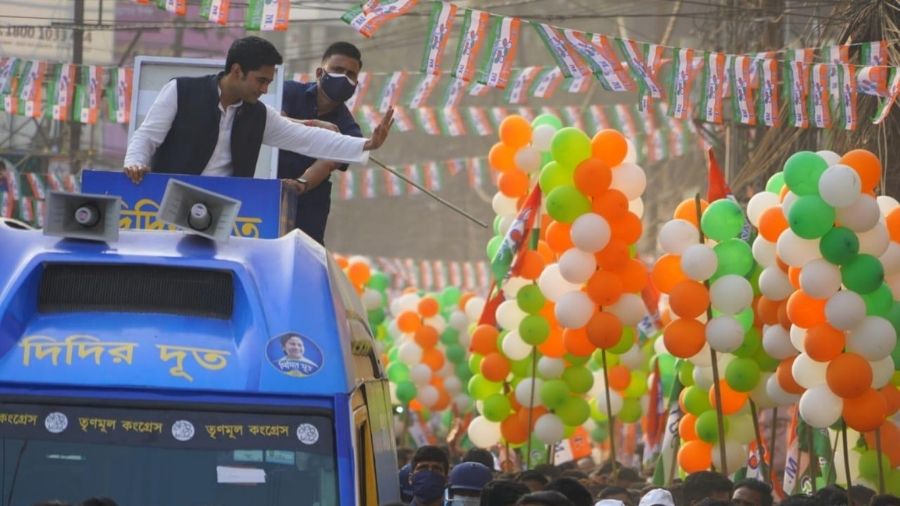 Claiming that it would take 10 years to complete the Covid-19 vaccination process in the country, senior Trinamool Congress leader Abhishek Banerjee on Saturday accused Union Home Minister Amit Shah of misleading members of the Matua community on providing citizenship to them.

Shah attacked the Mamata Banerjee government for opposing the Citizenship Amendment Act (CAA) at public meetings in Bengal on Thursday, and asserted that the contentious citizenship law would be enforced after the completion of the coronavirus inoculation programme.

Referring to TMC leader Dinesh Trivedi's resignation from Rajya Sabha on Friday months before the assembly polls, Abhishek Banerjee who is the youth wing president of the party and a Lok Sabha MP, said, "Trivedi said he was feeling suffocated. Let him go and get admitted to the BJP's ICU.

"Shah said that the CAA will be implemented once the Covid vaccination work is completed in the country. It will take 10 years to complete the vaccination process in the entire country. He is misleading the Matuas, Banerjee said while addressing a public meeting at Kulpi in South 24 Parganas district.

Matuas, originally from East Pakistan, are a weaker section of Hindus who migrated to India during the Partition and after the creation of Bangladesh. Many of them have been accorded Indian citizenship but a sizable section of the population has not got it.

The Matua community, with an estimated population of three million in the state, can tilt the scales in favour of a political party in at least four Lok Sabha seats, more than 30 assembly seats in Nadia, and North and South 24 Parganas districts. It once stood behind the TMC but had supported the BJP in the 2019 Lok Sabha polls.

Now, both the BJP and the TMC are wooing the Matua people ahead of the assembly election due in April-May.

On Shah's statement that the TMC will be uprooted from Bengal in the assembly polls, he said that the TMC is not a cutout which one can uproot. "It is a grassroots party.The more you cut it, the more it will grow."

Claiming that the only poll plank of the BJP is 'Jai Shri Ram' and it has no development agenda, the TMC leader alleged that the saffron party does not know to give respect to women.

"They say Jai Shri Ram and not Jai Siya Ram. This is because they don't know to give respect to women", the nephew of Mamata Banerjee said.

"See the way the BJP showed disrespect to Mamata Banerjee at the birth anniversary celebrations of Netaji Subhas Chandra Bose at the Victoria Memorial Hall in Kolkata," he said.

Mamata Banerjee, state chief minister and the TMC supremo, on January 23 refused to speak at the event attended by Prime Minister Narendra Modi after "Jai Shri Ram" slogans were raised by a section of the audience just before she was to start her address.

The Diamond Harbour MP also alleged that women are tortured in BJP-ruled states like Gujarat and Uttar Pradesh.

Abhishek Banerjee claimed that the TMC will get more than 250 seats in the assembly polls while the saffron party will find it difficult to cross the double-digit mark.

Countering the BJP's claim of coming to power in the state by winning over 200 seats in the election to the 294- member assembly, he said, "Bengal will elect Mamata Banerjee as the chief minister for the third time."

The saffron party's clamour for a double-engine government (same party rule in the Centre as well as state) in Bengal will fall flat before the single-engine power of Mamata Banerjee, he said adding that the TMC will be in power for 50 years.

He claimed that BJP leaders coming from north India are a "bunch of outsiders" who are not aware of the culture of Bengal, and spreading fake news to confuse people.

The TMC MP alleged that the BJP is trying to impose north Indian culture on Bengal.

"Let me say our chief minister Mamata Banerjee will stand there like Maa Durga to fight against the BJP which has weapons like CBI and ED", he said.

Banerjee claimed that the saffron party is trying to influence farmers of the state by promising to provide Rs 18,000 in their accounts, if elected to power, but "Bengal will never sell its spine to the BJP".

The BJP has been saying that if voted to power in the state, it will ensure that each farmer of the state gets Rs 18,000 in arrears under the PM-KISAN scheme.

"The BJP should first think of Gujarat, UP and other states. No need to worry about Bengal. Outsiders will not rule Bengal," the TMC leader said.

Later, Banerjee conducted a roadshow from Kamalgazi to Sonarpur in South 24 Parganas, a stretch of around 4 kilometres, atop a blue coloured bus named 'Didir doot' (agent of Didi).