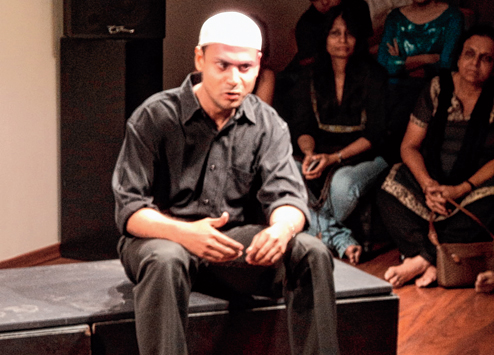 Eighty-five plays in 13 years is no mean feat, especially for an English theatre group in Calcutta, where even Bengali amateur groups struggle to stay afloat. Theatrecian has managed to achieve just that and has even more reason to celebrate as the group has been invited to the US to stage two of its plays.

Tathagata Chowdhury of Theatrecian has been invited to attend the South Asian Theater Festival organised by the Epic Actors’ Workshop at Cincinnati, US, with two of his productions — The Zoo Story and The Mumbai Zoo.

After a successful production of the critically acclaimed 12 Angry Jurors at Tata Theatre, NCPA, in Mumbai recently, Theatrecian will now present its plays before an American audience.

The year began on a good note for Theatrecian with TC (as Tathagata is popularly known in the theatre world) representing Calcutta at a workshop for theatre trainers conducted by the British Council and the Royal Shakespeare Company. He was one of 25 from across India. The objective of the workshop was to introduce Shakespeare to school students using workshop techniques.

In February, Theatrecian produced Is Anybody Listening?, in association with t2 and Spandan. Theatre buffs saw Alyque Padamsee and Sabira Merchant together on stage in March, thanks to Theatrecian, who in association with Emami and Ace Productions and t2, presented The Death of a Salesman, an Arthur Miller play, at Kala Mandir.

TC’s team travelled to Mumbai in April with The Comedy Kitchen, a collection of 10 short skits directed by Dhruv Mookerji.

“BBC Four has recognised our group as the most prolific youth theatre group in the country. We are excited to perform at Cincinnati and Boston,” said Chowdhury.

“Calcutta has the best theatre audience. But no theatre,”Alyque Padamsee had said while performing for a production in the city last year. One wonders what the ad guru would say looking back at the last six months on Theatrecian’s calendar!

An initiative of Sahajiya Foundation and Attodeep, the evening had band members singing from the collection of mystical poems from the tantric tradition of Bengal, Assam, eastern Bihar, Jharkhand and Odisha between 8th and 12th Century. The verses are meant to be sung in a state of trance or enlightenment.

“The aim of every religion is to spread the message of humanity and love. We’re trying to do our bit with music and lyrics,” said Deb, lead singer of Sahajiya.

A niche audience trooped in at Aneek Mancha, Salt Lake stadium, last month to watch short films on homosexuality, suicide and other relevant issues. An initiative of Wide Angle, the two-day screening was meant to generate interest in short films and documentaries.

“Our objective is to promote short films and filmmakers of Calcutta. We’re planning to have screenings once a month. Since the audience for shorts is niche, we want to take it to a wider plane,” said Dibyajyoti Bhaduri, one of the organisers. Bhaduri is a final-year mechanical engineering student of Jadavpur University. “All our members share a love for short films, though none of us has any training in filmmaking,” he added.

One of the films screened was More Than A Friend by Debalina. It is on homosexuals, how they are ostracised and the backlash they face. Public opinion was also recorded.

Another film, Pseudocide by Anrinyo Dasgupta and Dibyajyoti Bhaduri, focussed on suicide. “This is a very pertinent topic. You cannot be judgmental because someone breaks down and gives up on life. People need to be more sensitive,” Bhaduri said.

Works of 10 artists, sculptors, designers and filmmakers from Calcutta, Mumbai, London, the US and Hungary make up Mapping Detours — an exhibition at Chitrakoot Art Gallery on till June 16.

The contributors are all bound by a common medium — paper, on which they etched their thoughts and inspirations.

City-based artist Radhika Agarwala, who hosted the show, had met all the contributors in the course of her studies and travels abroad, thus accounting for the name of the show.

“For me this exhibition is a homecoming of sorts. Some artists taking part here may dabble in a different genre, but I wanted all of them to use paper. Most shipped their contributions and I made the final selection,” said Agarwala, who returned only recently. She herself has contributed the largest exhibit of the show — a six-foot-long charcoal work, Sleepwalkers Collision. “I have been working on it for four long years,” she said, pointing to a collection of hybrid vultures, swans, owls and other creatures in the night sky. “I wanted my work to highlight the play of filth and beauty. I based it on Freud’s Beyond the Pleasure Principle.

Another interesting series of exhibits is that of city-based Viraag Desai. His Anatomical Study is a fusion of geometric signs, nature and imageries. “Inspiration struck me as I looked out of the window and then I air-brushed my work,” said the artist-cum-graphic designer.

A riot of colours, creatures and creativity marked Hing Ting Chhot — a debut attempt by Uttarpara Bratyajon, a theatre group for children with Bratya Basu as chief adviser.

The play was staged at Gono Bhavan in Uttarpara as part of the group’s first half-yearly children’s drama and cultural festival.

Based on a popular Bengali fable about a rat entering a lion’s den, the play highlights how man is very “beast-like” in his behaviour.