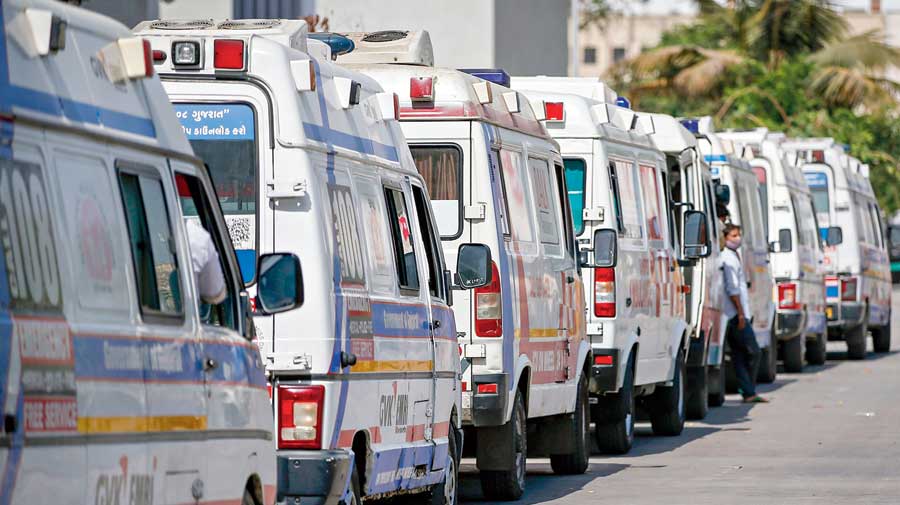 Patient Samir Munda’s death prompted around 100 people to demonstrate at the superspecialty hospital, alleging gross neglect. Police brought the situation under control. Samir’s family filed a complaint with Kotwali police and with the office of the chief medical officer of health.
Shutterstock
Our Correspondent   |   Jalpaiguri   |   Published 26.08.21, 12:54 AM

An 18-year-old detected with Covid-19 died at the superspecialty hospital here on Wednesday as the ambulance supposed to take him to the Covid hospital at Biswa Bangla Krirangan took four hours to reach, by which the teenager had breathed his last.

The distance between the two hospitals is a mere 2km and should have taken 15 minutes to cover. But scarcity of ambulances led to the delay, service providers admitted.

Patient Samir Munda’s death prompted around 100 people to demonstrate at the superspecialty hospital, alleging gross neglect. Police brought the situation under control. Samir’s family filed a complaint with Kotwali police and with the office of the chief medical officer of health.

Sources said on Tuesday night, the youth of Joypur tea estate on the outskirts of Jalpaiguri town got fever. As his illness got worse, his family members brought him to the superspecialty hospital around 5am on Wednesday.

Doctors at the emergency wing did his rapid antigen test and found him Covid positive. They referred him to the Covid hospital and asked the family to dial 102 for an ambulance. The ambulance reached at 9am, but Samir had died, his uncle Joseph said.

“We approached the doctors at this hospital but they said that as he was Covid positive, he could not be admitted. He died in front of the emergency wing. It is complete negligence on the part of the district health authorities that we lost him,” said Joseph.

As the news spread, hundreds of angry residents from the tea estate reached the hospital and demonstrated for around five hours. They also confined a number of hospital officials. Arghya Sarkar, the inspector-in-charge of Kotwali police station, among other cops, spoke to demonstrators and persuaded them to withdraw.

Pradhan Hembram, chief of the Trinamul-run Patkata panchayat of Jalpaiguri Sadar block, had also joined the protest. Joypur is under this panchayat.

“The state government is spending crores for free treatment of Covid patients. Only because of irregular ambulance service, a youth lost his life. The district health department is responsible for his death,” said Hembram. “If no corrective steps are taken within two days, we will launch a movement on the issue along with workers of Joypur tea estate and their families,” he said.

Contacted, Roy said he has sought a report of the incident. “An inquiry has been ordered and if any negligence is found, appropriate steps would be taken,” he said.

Sources in the district health department said as the number of Covid cases have declined during past few weeks, the number of ambulances engaged earlier were slashed.

“As of now, there is only one ambulance in Jalpaiguri town and the Sadar block for Covid 19 patients. This ambulance, too, has not been working for the past 10 days because of mechanical problems. We are somehow managing with two other ambulances designated for Rajganj and Maynaguri blocks. Today, we asked for the ambulance for Rajganj but by the time it reached the hospital, the patient had died,” said Bablu Mohammad, the coordinator of Covid ambulance service in the district.

Amid the demonstration, ward master of the superspecialty hospital Pulin Singha fell ill and was admitted to the hospital.