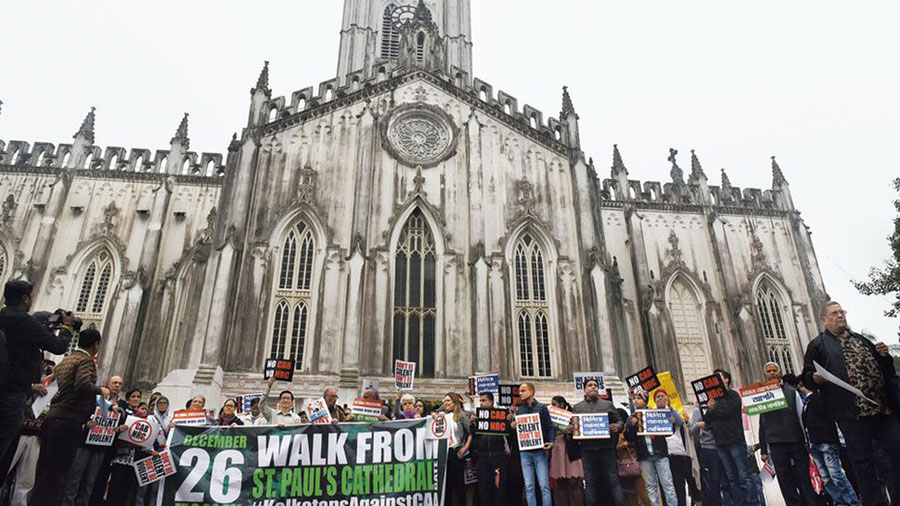 Representatives of various faiths and the civil society on Monday condemned the chants of “goli maaro” that were raised in the heart of Calcutta by alleged supporters of Union minister Amit Shah on Sunday.

The disapproval was voiced at a news conference titled “Against Goli Maaro… slogan” convened by a citizens’ forum on Monday. The representatives described the sloganeering as a “blatant attempt” to trigger violence.

Those present at the press conference said it was important that a counter slogan of “Gale laga lo sabko” was launched to spread peace.

“The flares of Delhi have not yet been extinguished entirely. At a time like this, men dressed in saffron and waving BJP flags raised the slogans while marching towards Amit Shah’s rally. No one from the party has bothered to condemn its workers. This exposes what they are up to in Bengal,” said Partha Sengupta of Sadbhavna Manch.

Abdur Rafiq, president, Jamaat-e-Islami Hind, West Bengal, said the slogans were raised with an intention to whip up communal frenzy in the run-up to the Assembly elections in Bengal in 2021.

“Amit Shah did not utter a word on the Delhi riots in his speech at the Shahid Minar ground. His supporters are now busy laying the ground for riots in Bengal. The warnings were sounded on Sunday,” Rafiq said.

The Sadbhavna Manch will hold a peace march from Hazi Mohammad Mohsin Square to Rani Rashmoni Avenue on Thursday, followed by another one organised by United Interfaith Foundation from Mother House to the Gandhi statue on Mayo Road on March 8.

“We have invited representatives of the civil society and university students to lead the march and spread the message of peace,” Qari Fazlur Rahman of the Manch said.

“Citizens, irrespective of caste, creed and religion, will walk together to promote peace and harmony,” said Dashmeshbir Singh Sodhi of the Interfaith Foundation.