Alipurduar tiger skin likely to be of Manas big cat

Pictures sent to Dehradun for scientists to ascertain habitat and identity 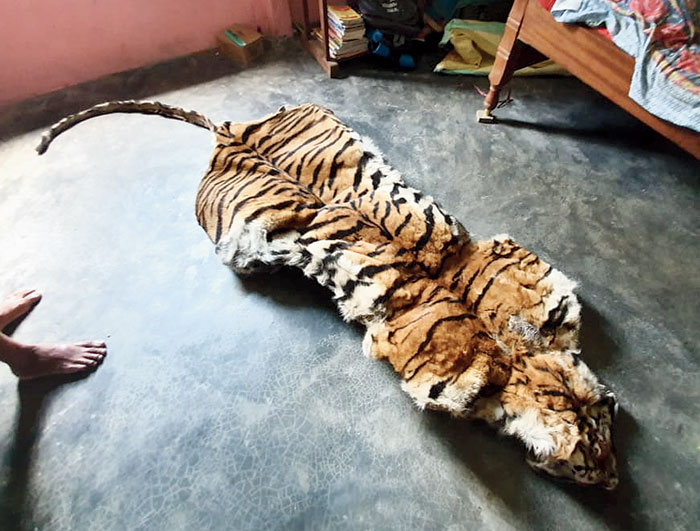 The picture of a tiger skin in a house near Manas National Park in Assam that forest officials had found on the phones of five persons arrested in June. The same skin is suspected to have been seized from Alipurduar on Tuesday
Telegraph picture
Debraj Mitra   |   Kolkata   |   Published 22.10.19, 07:57 PM

The tiger skin seized from two Bhutanese nationals in Alipurduar last Tuesday had been on the for-sale list of suspected poachers for several months, forest officials said.

The special task force of the state forest department seized the tiger skin, along with the big cat’s skull and bones, from two residents of Bhutan at Hasimara in Alipurduar. The duo, suspected couriers, had allegedly procured the skin and bones from poachers in Assam, forest officials said.

Five persons were arrested near the Bengal-Assam border in June after forest sleuths received a tip-off that a tiger had been killed in Assam’s Manas National Park.

“We had information that the poachers would try to sell the skin and bones to someone in Nepal. Based on a tip-off, our men intercepted an ambulance near the Bengal-Assam border in Srirampur. There were five persons in the vehicle,” a senior forest official at the headquarters in Calcutta said.

The sleuths could not find the skin or bones but interrogation revealed they were trying to find a buyer for the animal parts, the official said. Pictures of the skin and bones were also found on the mobile phones of those arrested.

A team of forest officials from Manas came down to Bengal to help their counterparts in the probe. Another team went to Manas and raided multiple houses in its vicinity but there was no sign of the parts.

The skin and bones seized on Tuesday are suspected to be the long-wanted ones, said an official of the Wildlife Crime Control Bureau, which is helping the forest department in the probe.

“Manas has camera traps. If the live tiger’s images can be found, it would be easier to confirm whether these are its body parts. But a prima facie analysis of the pictures of the skin seized on Tuesday and the pictures found in the phones of the persons arrested in June indicate they are of the same tiger,” the official said.

W. Longwah, the inspector-general of the National Tiger Conservation Authority (east zone), said the pictures of the skin seized on Tuesday have been sent to the Wildlife Institute of India in Dehradun. “The scientists will tally the pictures with their repository to ascertain the habitat and identity of the tiger,” said Longwah, who has sought a report from Manas.

Two Bhutanese nationals were arrested with the skin and bones last Tuesday. A third person, also a Bhutanese, was arrested a day later from the same area of Alipurduar.

The consignment was headed to Kathmandu to be handed over to another dealer, forest officials said on the basis of preliminary interrogation of the suspects.

Initial probe suggests that the tiger was trapped in a snare, said sources in the forest department. “There are some marks on the skin that suggest the tiger tried to free itself from the trap,” a forest official said.

Tiger skin and bones are in great demand in Southeast Asia, especially China. Tiger bones and other body parts are used to make “traditional Chinese medicines” that are believed to cure ailments and increase virility.

The Siliguri corridor is a thriving circuit for wildlife traders because of its proximity to the Northeast.

Tigers are accorded the highest protection under Schedule I of the Wildlife Protection Act, 1972, and it is illegal to kill them or trade in their parts.