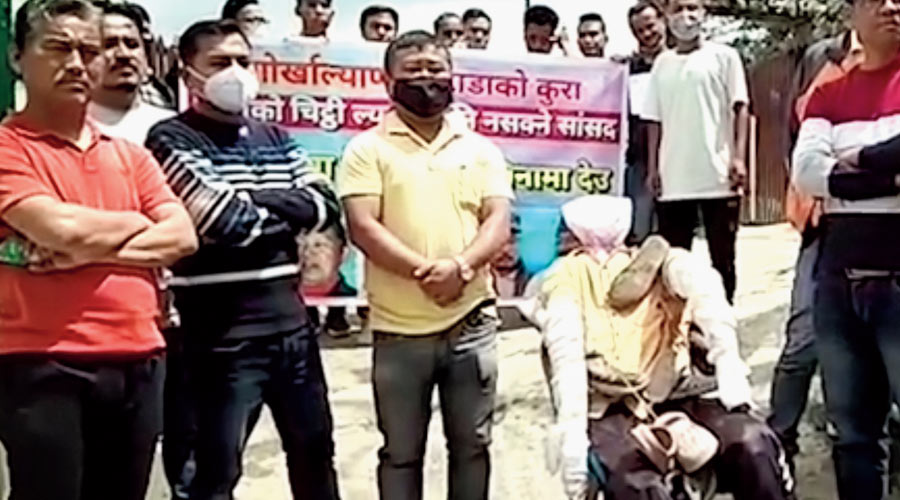 Supporters of the ABGL’s Bharati Tamang faction protest against Bista with his effigy in Darjeeling on Monday.
Telegraph Picture
Vivek Chhetri   |   Darjeeling   |   Published 07.09.21, 02:06 AM

The Akhil Bharatiya Gorkha League’s Bharati Tamang faction on Monday staged a protest against alleged lies of Darjeeling BJP MP Raju Bista after the Centre had failed to convene a meeting to discuss the “permanent political solution” of the hills.

After meeting Union home minister Amit Shah on August 6, Bista had claimed that a tripartite meeting to discuss the “permanent political solution” of Darjeeling, the Terai and the Dooars would be held by the first week of September and letters would be sent to the invitees around August 12.

Bista is a national spokesperson for the BJP as well as the national general secretary of the Bharatiya Janata Yuva Morcha.

On Monday, when all commitments made by Bista had missed the deadline, supporters of the ABGL (Bharati Tamang faction) carried an effigy of the MP that was garlanded with slippers in Darjeeling.

Vikram Adi Rai, vice-president, ABGL (Bharati faction), said the protest rally was held as Bista was not respecting his mandate.

“The hills gave him a lot of respect by casting 7 lakh votes (in his favour). But if he cannot work according to the respect given to him, he deserved to be garlanded with slippers and shoes instead of flowers,” said Rai. “He is simply covering one lie with another.

Many agree that Bista has been one of the most vocal MP from Darjeeling to raise “issues” of the hills in Parliament. “The hills, however, want something concrete,” said an observer.

The ABGL (Bharati Tamang faction)’s protest on Monday found traction among many in the hills as their general secretary, S.P. Sharma, had lifted his fast-unto-death on hearing Bista’s assurance on August 6 through media reports. The hunger strike had been started by Sharma to seek something concrete on the “permanent political solution”.

After meeting Shah, Bista had said: “I am happy to state that the Union home minister has assured us that an invitation for an official meeting for a permanent political solution will be issued next week, around August 12… and the first official meeting will start in the first week of September.”

The Darjeeling MP had also said that invitation would also be sent to the Bengal government and the announcement had created a stir in hill politics.

When the invitation had not been issued in mid-August, BJP leaders had clarified that the delay was possibly because of Independence Day celebration. A few days earlier, Bista had reportedly said developments in Afghanistan “maybe” the reason for the delay in holding talks in the first week of September.

On Monday, sources said the ABGL supporters had wanted to carry the effigy on a pony but since they could not get hold of one, they decided to carry Bista’s effigy from Ladenla Road in Darjeeling to Bista’s Darjeeling residence, Matterhorn, situated at the Mall. Ponies are available for rides at Chowrasta.

While Bista could not be immediately contacted, Mann Ghisingh, GNLF president, who was part of Bista’s delegation to meet Shah on August 6, however, defended the delay. “The dialogue will open, it will happen soon, within September. But I don’t want to talk about a particular date,” said Ghisingh.

The Bharati Tamang faction of the ABGL has threatened to hold the protest rally once a week, until the meeting is held.