She was referring to BJP leader Kailash Vijayvargiya’s remarks, for which he was accused of insulting Agniveers amid violent protests erupted nationwide 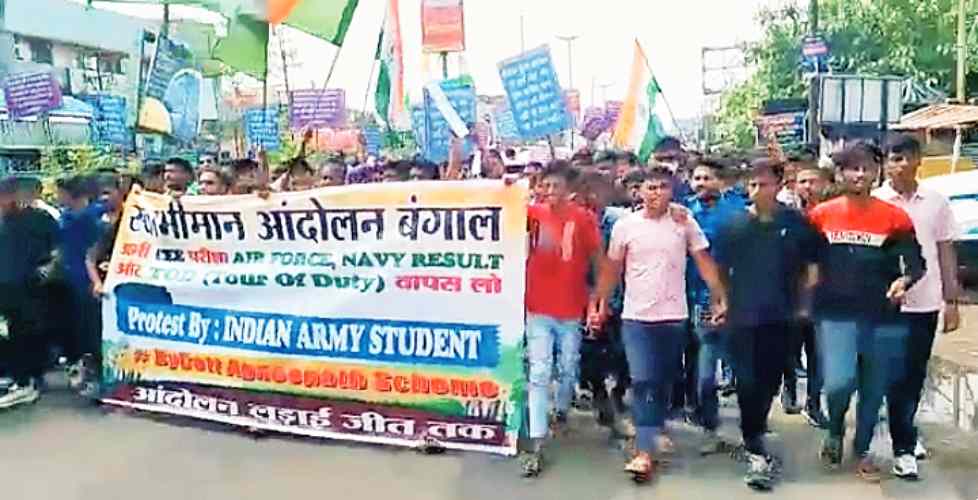 A march in Barrackpore on Monday against the Agnipath scheme.
Ankit Mukherjee
Meghdeep Bhattacharyya   |   Calcutta   |   Published 21.06.22, 01:21 AM

Mamata Banerjee on Monday alleged that the Agnipath scheme was a ploy by the BJP to generate its cadres from unemployed youths and then employ such people to rig elections and engage them as security guards outside the party’s offices.

The chief minister ended her silence on the Agnipath military recruitment scheme while she was addressing the Bengal Assembly in the context of a motion condemning the remarks against Prophet Mohammed by now-axed BJP spokespersons.

“The BJP has given but a lollipop of four years to turn unemployed youths into goons of the future…. This is in no way an attempt to protect the nation,” said Mamata of the controversial Agnipath scheme, under which soldiers would be demobbed after four years without pension.

She reminded that the Narendra Modi government had promised two crore jobs annually and said it was now trying to fool the people with such proposals.

“This Agnipath is essentially a scheme to bring up cadres for the BJP before the 2024 general election. They will eventually be guarding BJP offices, they will help in the looting of votes,” the chief minister added, to loud protests from BJP MLAs, who eventually staged a walkout, accusing her of insulting the armed forces and the nation.

Mamata was referring to BJP general-secretary Kailash Vijayvargiya’s remarks, for which he was accused of insulting Agniveers at a time violent protests erupted nationwide against the scheme. He said in Indore that he would give preference to demobbed Agniveers while recruiting security guards for BJP offices, seeking to challenge the protesters’ complaint that the recruits would be jobless after four years.

Besides Vijayvargiya, Union culture and tourism minister G. Kishan Reddy said Agnipath recruits would be trained in the skills of “drivers, electricians, washermen, barbers and other professionals”.

Their comments have caused widespread outrage among protesters, netizens and the Opposition.

The Trinamul chairperson wondered what the road ahead would be for the youths after those four years in service.

“What exactly are they to do after that? Nobody is talking about that. Are they being made goons, these youths, by the BJP… with training in firearms,” she said.

“This is not training being given by the army… but they will be given weapons training and will get an arms licence. This party wants to get these youths access to firearms,” added Mamata.

Mamata condemned the BJP over its bulldozer politics, warning it of how the people would bulldoze them in 2024. She also reiterated her unequivocal condemnation of the remarks against Prophet Mohammed.

“I firmly condemn the remarks… that was part of a bigger plot to foment tension by spreading hatred between communities in the run-up to the general election. Why no arrest yet?” she asked.

Earlier in the day, in Agartala, Trinamul national general-secretary Abhishek Banerjee offered the first formal reaction from the party’s top-tier leadership on the Agnipath issue.

“I have no words to condemn what Kailash Vijayvargiya and G. Kishan Reddy said…. They should be expelled from the party, their citizenship should be taken away, they should be thrown out of the country, if they think this way,” said the Trinamul MP.

He said unilateral announcement of ill-planned schemes was part of the BJP-led Centre’s trajectory for years, equating Agnipath with demonetisation, the citizenship matrix and the now-withdrawn farm laws.

“The son of a BJP leader will be the BCCI secretary  and president of the Asian Cricket Council. Vijayvargiya’s son is an MLA who openly assaults people. But the son of the common man will become a security guard at BJP offices?” asked Mamata’s nephew.