After prank Snapchat on plane, 10hrs with cops 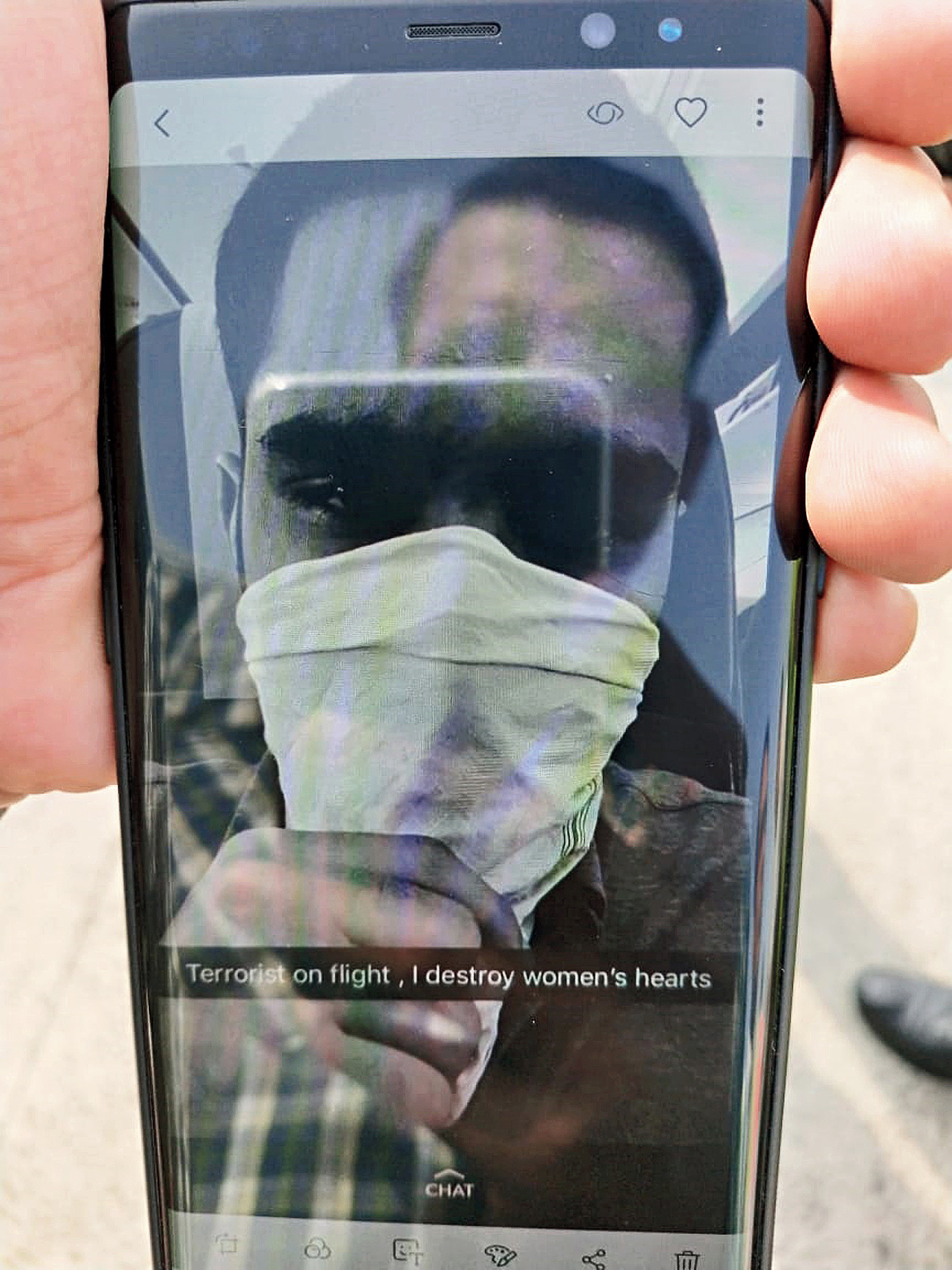 A screenshot of Yogvedant Poddar’s Snapchat post to his friends from a flight to Mumbai waiting for take-off on Monday morning.
Screenshot
TT Bureau   |   Calcutta   |   Published 26.11.18, 08:39 PM

A 21-year-old man attempting a Snapchat prank on his friends while seated on a plane had his post-CAT Goa holiday grounded before take-off when a British co-passenger reported him to the crew for covering his face and sending what turned out to be a harmless and misinterpreted message: “Terrorist on flight. I destroy women’s hearts.”

Yogvedant Poddar, a commerce graduate and MBA aspirant from Beleghata, was not only offloaded from the 8.15am Jet Airways flight to Mumbai on Monday but also spent the next 10 hours in detention, first at the airport and then at a police station.

At the end of his ordeal, the security agencies’ verdict was that neither Yogvedant nor the six friends to whom he had sent the message had anything remotely to do with terror.

“We questioned him extensively, cross-checked with multiple agencies and we found no terror link. It was a message that was meant exclusively for his friends and was not intended to threaten or hurt anyone,” said Avvaru Ravindranath, deputy commissioner of the detective department of Bidhannagar City Police.

According to airport officials, three factors had contributed to Yogvedant being offloaded and detained for prolonged interrogation.

First, complainant Benjamin Plackett allegedly misread the second part of the Snapchat message on the young man’s laptop screen as: “Terrorist on flight. I destroy all people.”

The coincidence of the young man being on a Mumbai flight on the tenth anniversary of the 26/11 terror attacks in that city didn’t escape security officials.

Third, minister of state for civil aviation Jayant Sinha was to board another Mumbai-bound flight from Calcutta around the same time.

Yogvedant was in seat 29B of flight 9W472 when Plackett, occupying seat 30D diagonally behind him, noticed the T-word and apparently panicked on seeing the young man’s face partially masked. The youth told airport officials later that he had tied a handkerchief around his face because he was sneezing.

“The door was still open and the aircraft was in parking bay 31 when Plackett got up from his seat and walked to the rear of the plane where the cabin crew was standing. He told them there was a passenger with a mask in front of him and that he had sent a message which alarmed him,” an airport official said.

When word reached the captain of the flight about a potential threat, he immediately alerted Jet Airways security. A team from the airline entered the aircraft along with Central Industrial Security Force (CISF) personnel within minutes.

“The young man seemed totally oblivious to his act being interpreted as something wrong. He was laughing when the security officials asked him about the message. He said he was only sending a message to his friends,” an official recounted.

The team explained to Yogvedant that his message had “threatened the security of the flight” and escorted him out, the official said.

Yogvedant was first taken to the CISF office in the departure level of the airport and interrogated. His family was informed of the detention. He was later taken to the Airport police station and interrogated separately by multiple agencies, including a Military Intelligence team from Fort William.

One of the friends to whom he had sent the Snapchat message was brought to the airport by his parents. A security official said the friend was also questioned and his mobile phone screened by security agencies to ensure that Yogvedant was speaking the truth.

An officer in the Bidhannagar police commissionerate said Yogvedant was taken to a room at the police station, made to sit and provide details about himself and his family. An officer of the rank of inspector questioned him and his father, Nirmal Poddar, was asked to come down.

The questions Yogvedant faced ranged from how he got the idea of taking a picture of himself with his face masked to whether he had ever been in contact with terror elements over the Internet.

The police also did a background check on the six friends to whom he had sent the message on Snapchat.

Sources said a section of security officials had wanted to set up “a bomb threat committee” with representatives of multiple agencies and conduct a safety drill. The airport authorities rejected the suggestion, saying that no such threat was mentioned in the Snapchat message.

A routine security scan of the aircraft was carried out before the flight with 140-odd passengers took off at 9.37am, an hour and 22 minutes behind schedule.

For Yogvedant, a graduate from The Bhawanipur Education Society College, appearing for CAT on Sunday would have been far less daunting than the questions on terror he had to face unprepared the next morning. 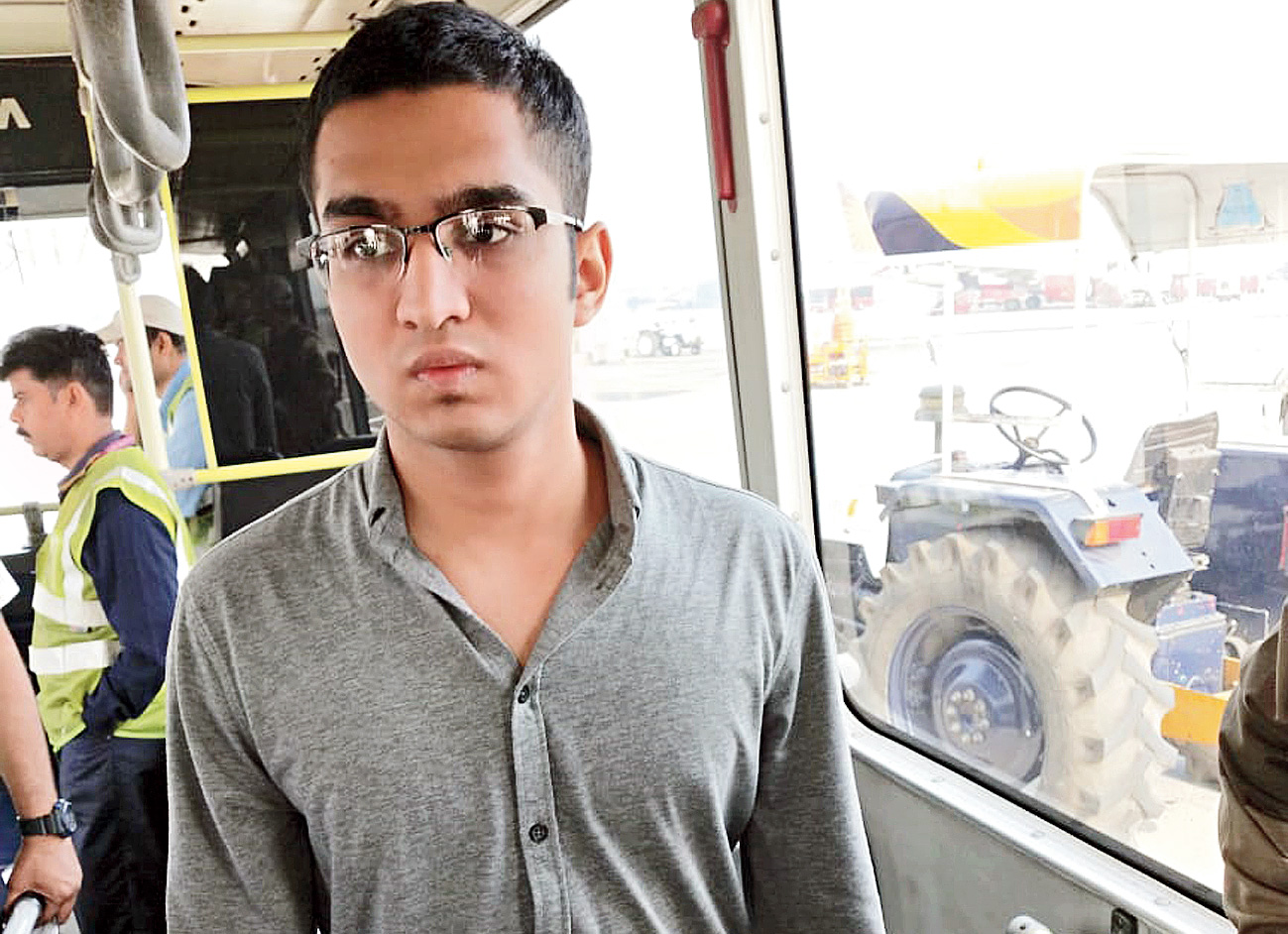