According to the data published by the state health department on Monday, 1,238 new cases have been reported in the region in the past 24 hours 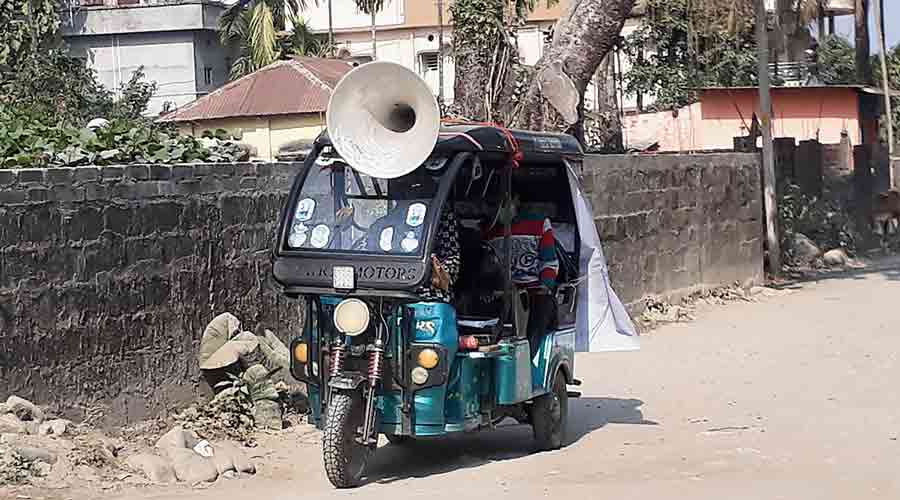 An e-rickshaw engaged by the administration to make public announcements with regard to Covid-19 restrictions in Siliguri on Monday.
Passang Yolmo
Our Bureau   |   Siliguri   |   Published 11.01.22, 02:57 AM

The number of fresh Covid 19 cases in north Bengal continued to remain above 1,000 in the past 24 hours, while the number of active patients reached close to 5,000 in the region.

According to the data published by the state health department on Monday, 1,238 new cases have been reported in the region in the past 24 hours, which has increased the number of active patients to 4,704.

The highest number of fresh cases have been reported in Darjeeling (382), followed by Malda (306) and North Dinajpur (170).

In Jalpaiguri town, the administration conducted rapid antigen tests of around 70 people who were found roaming in the Kadamtala area of the town without masks. Six of them were tested positive.

The case count, however, is still low in tea belts. “Even in the two earlier waves of the pandemic, we have seen that the number of cases have remained low in tea estates. It is a positive sign. However, there is still a section of people in these gardens who are yet to take their second dose. They should immediately get jabbed for the second time and help in keeping things under control,” said a general physician based in Siliguri.

In Alipurduar district, the number of cases also went up on Monday, prompting the civic body at the district headquarters to start making public announcements so that residents adhere to the restrictions which have been imposed by the state.

In past 24 hours, 53 new cases have been reported in the district.

Meanwhile, movement of goods vehicles to Bhutan resumed from Monday from Alipurduar district via Jaigaon and Pasakha. The movement was close since Friday after a three-day shutdown was announced in Phuentsholing, the commercial capital of the neighbouring country that sits on the other side of the border, after a community Covid 19 case was reported in the town.

The surge in cases has made Trinamul leaders of Falakata (also in Alipurduar district) to act. They have decided to form quick response teams comprising youth workers who would rush for help sought by any Covid patient or the family members. They have also decided to run a community kitchen from where free meals would be served to needy people.

Along with common people, the contagion continued to infect state government officials posted in different districts. In Cooch Behar, the district magistrate, the superintendent of police and the chief medical officer of health have been tested positive, said sources. All of them are in isolation.

In Malda, the administration has marked 12 micro containment zones -- nine in Englishbazar and three in Kaliachak-I blocks. Also, two safe homes, one in Malda and another in Harishchandrapur, have been opened to cater Covid patients if they need hospitalization.

The number of containment zones also increased in North Dinajpur. In Raiganj, 18 such zones have been marked so far, said sources. “The figures might have indicated a slight dip than the past few days but there is no point in being lackadaisical. This might have happened because of less number of tests on Sunday,” said a doctor.