Advertisement
Home / West-bengal / The political equaliser, according to Abhishek Banerjee

The political equaliser, according to Abhishek Banerjee 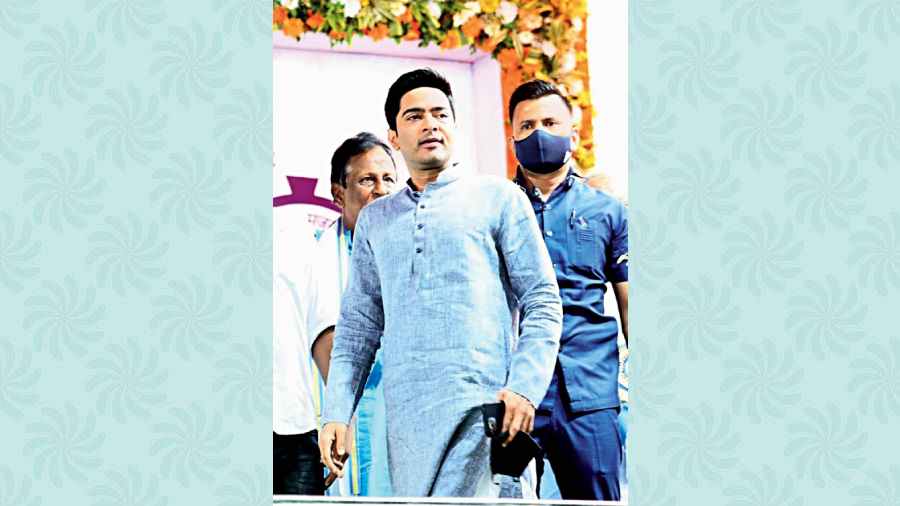 Trinamul all-India general secretary Abhishek Banerjee on Saturday linked his two ED summonses to  Delhi to twin defections from the BJP of Arjun Singh and Babul Supriyo to his party, hinting at how he avenged his “insult”.

In his first mega political rally at Haldia ahead of civic polls likely in September, Abhishek went all guns blazing at the BJP on central agency summons and attacked Nandigram MLA and leader of Opposition Suvendu Adhikari without naming him.

“You (BJP) put ED and CBI after me and summoned me to Delhi…. I did not bow down before the (central) agencies. What did you achieve?” he thundered in front of the 1-lakh-strong crowd at Sanhati ground of Haldia’s Ranichawk.

“You insulted me twice by calling to Delhi…. I returned the favour twice and got two MPs from the BJP to Trinamul.. If you insulted me twice, I made you bow down twice… I know the language you understand,” the Diamond Harbour MP said to loud applause.

“I never sought any protection from you (BJP)... I only wanted the questioning in Bengal. You got badly defeated in Bengal and you wanted to insult me by summoning to Delhi,” he thundered.

Abhishek appeared before the ED in September 2021 and March 2022 in Delhi in a case of prevention of money laundering Act in connection with the coal theft scam. He appealed to the Supreme Court for interrogation in Calcutta instead of Delhi, which the apex court this month granted.

“So many from the BJP are making a beeline to join our party.… If we open the door, the entire party will come,” added Abhishek.

In the 2021 Assembly polls, BJP won seven seats out of 16 in East Midnapore and was ahead of Trinamul in 26 wards out of 29 in Haldia municipality. Trinamul is keen to wrest the Haldia civic body, considered Suvendu’s backyard.

Abhishek attacked Suvendu without naming him..

“Since 2011 when Trinamul came to power, a person from here put up a wall between the state administration and Trinamul organisation. Today I have broken the wall.... No one will interfere between labourers and the party,” he said.

“The land of Midnapore is precious... A person who has bowed down in front of the BJP, the party that vandalised the bust of Vidyasagar in Calcutta on May 14 in 2019, has no right to represent you. You know how the person sold himself to the BJP in a bid to escape from agencies like the ED and the CBI. He sold Midnapore to the BJP,” said Abhishek.

He also warned the “traitors” who apparently betrayed the party in the last Assembly polls to secure BJP’s victory.

To woo workers, he added: “Trinamul will not back those who are taking away the rights of the labourers.… No contractor will be allowed to be a part of Trinamul. You have to either be a contractor or a Trinamul leader.” He also said no one who joined the party from Suvendu’s camp or the CPM will get a Trinamul ticket in Haldia civic polls.

“Party will provide tickets only to those who are old timers and have been with the party since the beginning,” he said.

Sources said, Abhishek’s message to root out contractors from the industrial belt is important as around 65,000 workers and labourers are deployed through several contractors in the industrial units of Haldia. In most of the cases, the contractors deprive the workers from getting their legitimate benefits besides taking away a share of their wages.