Advertisement
Home / West-bengal / A day without parallel on ISI campus

A day without parallel on ISI campus 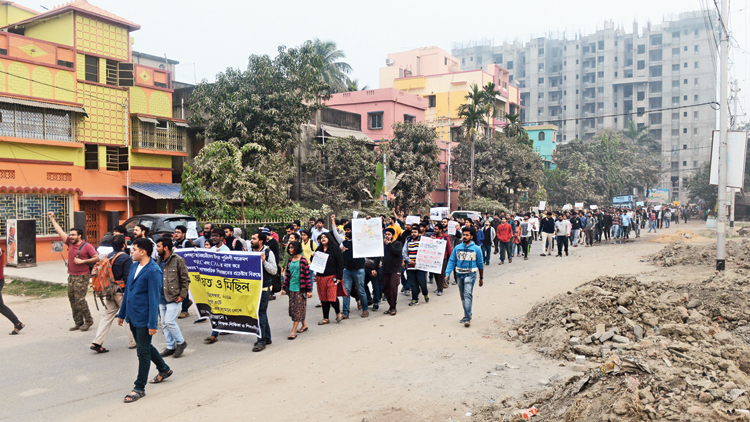 Students and teachers of the Indian Statistical Institute walk to protest the Citizenship (Amendment) Act and the National Register of Citizens on Monday.
Pictures by Bishwarup Dutta
Debraj Mitra   |   Calcutta   |   Published 23.12.19, 09:15 PM

Hundreds of students and teachers of the Indian Statistical Institute walked through neighborhoods near the campus on Monday to protest the Citizenship (Amendment) Act and the National Register of Citizens.

Almost everyone who walked said the police crackdown on Jamia Millia Islamia and other institutes was the immediate trigger for the march.

“My blood boils every time I see videos of the police atrocities on students. I research and get government grant. I should not shout slogans against the same government. But staying silent now means I am complicit in this crime,” said a 25-year-old research scholar, who was also a student at the Baranagar institute.

A professor with over four decades of association with the ISI said this was the first time he had seen students stepping out of the campus to protest.

The 88-year-old institute, founded by Prasanta Chandra Mahalanobis, is one of the most respected in the country and draws some of its sharpest minds. The centrally funded institute does not have a students’ union.

“In the two years I have been here, I don’t remember seeing even a sit-in. We discuss social issues but there is no dissent,” said a student doing his bachelor’s in statistics.

The participants — present and past students, a handful of teachers and some non-teaching employees — assembled in front of the library around 3pm. No slogans were raised inside the campus. Instead, the participants read out the Preamble to the Constitution.

“Since this is a centrally funded institute, the administration made an informal request not to raise slogans on the campus. A junior student came up with the idea of reading the Preamble. Given the way the Constitution is being violated, it was a good idea,” said an organiser, in the final year of her bachelor’s course in statistics.

Walking shoulder to shoulder were students fresh out of school, data science researchers, winners of the nation’s top science awards and professors of international repute.

Some of them did not want their names published because they were part of a central government institute.

Most of those who walked made their michhil debut on Monday. What started as a WhatsApp group of less than 10 students a week ago culminated in Monday’s rally that started from the campus and wound its way through pockets in Dunlop and Bonhooghly before returning to the campus.

The route taken by the rally, around a large lake in Bonhooghly, was dotted with neighbourhoods where a large number of migrant families from Bangladesh live. Many of them entered India long after the Partition.

The rally went past a sprawling residential complex, coming up on a plot along Lake View Road where once stood a colony. The colony was set up in the 1950s to accommodate refugees.

As the rally went past the homes in RIC Bazaar area, residents clicked the marchers on their cellphones from rooftops and balconies. RIC stands for Rehabilitation Industry Centre, a project launched for generating livelihood for refugees.

“We chose the route consciously to send out a message that immigrants are no lesser citizens,” said an organiser, a research scholar who has done his master’s in quantitative economics from the institute.

A poignant moment came around 4.45pm, when the ISI protesters were walking past BR Ambedkar Boys’ Hostel of Rabindra Bharati University in the Lake View Park area. As the marchers shouted “Manuvaad se azaadi (freedom from Manuvaad)”, many voices from balconies and windows of the hostel joined the chorus.

From spreading the word physically, sending social media invites to designing posters and printing flexes, everything was done by a core group of students.

“We did not expect this turnout, especially because there is a semester break and the hostels are almost empty,” said another organiser.

Some of the posters bore no sign of nerves. “Merry Crisis and A Happy New Fear,” read one.

A professor in the theoretical statistics and mathematics division, who has been associated with the institute for more than four decades, first as a student and then as a faculty member, said he had never seen “ISI students stepping out of the campus to take part in a protest rally”.

A handful of students met him last week and requested him to take part in Monday’s walk. “An environment of distrust, similar to the one that had led to the pre-Partition unrest, is being created in the country,” said the teacher.

A student said the amended act was not only unconstitutional, it was also economically futile. “The detention camps are being made by taxpayers’ money. Most people who would be kept there did something for a living. They will lose their jobs and giving them food and shelter will also drain the country’s resources,” he said.