Ghosh, who cultivates four acres of land, had accompanied a 400-member team, headed by the All India Kisan Sabha, to extend support to the protesters last year 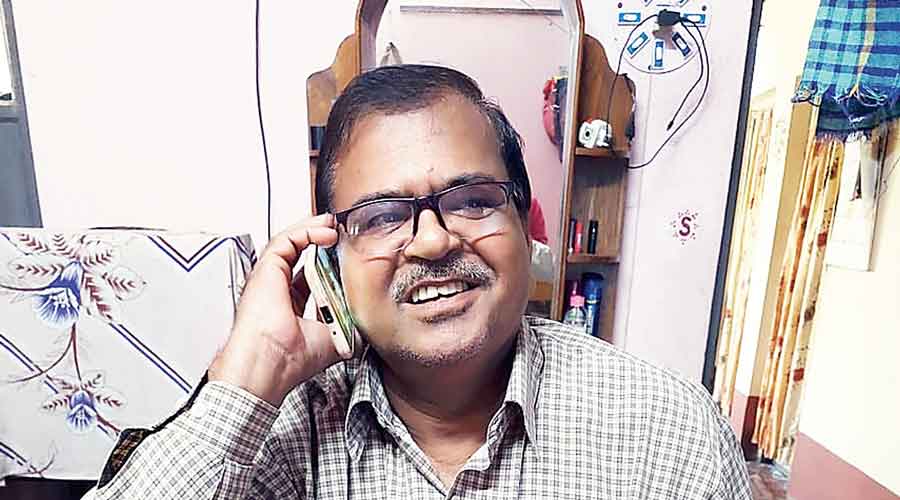 Over 1,800km away from the epicenter of farmers’ movement near Delhi, Somnath Ghosh, 58, a farmer from Hooghly’s Chanditala celebrated on Friday the victory of the anti-farm law movement with fellow farmers.

Ghosh, who had stayed for five days with the protesters at the Shahjahanpur border last  November, also shared his memories.

“I vividly recall the dedication of the thousands of farmers, with whom I spent five days in November last year. The temperature was some 2-3 degrees Celsius, but the farmers, including women, were firm in their protest on the Delhi-Jaipur highway. Many of them did not have enough warm clothes, but they were unflinching in the fight for their rights. The Prime Minister had no way out. This (promise to repeal the laws) had to happen sooner or later,” said Ghosh whose phone was inundated with calls from farmers of nearby villages, since the morning announcement by Narendra Modi.

The Hooghly farmer got the news from television that Modi had announced the decision to repeal the three contentious farm laws.

Since then, Ghosh started visiting other farmers with the message that if there is total dedication in the movement for a just cause, success will come.

Ghosh, a resident of the Madhupur village of Chanditala, cultivates four acres of land. He had accompanied a 400-member team of farmers, headed by the All India Kisan Sabha, to extend support to the protesters last year.

During his stay with the protesting farmers, he witnessed how farmers cutting across caste and creed joined forces to fight together, against all odds, for their rights. Ghosh said he and other farmers from Bengal could not meet the farmers protesting on Singhu border as police had put up barricades and iron spikes, barbed wire fences and concrete walls to keep them out.

“I, along with a few other farmers from Hooghly and East Burdwan, were discussing how police were so afraid of the protests by farmers that set up roadblocks usually meant for infiltrators on international borders,” said the farmer.

Ghosh said he heard farmer leaders such as Amra Ram, Hannan Mollah and Rakesh Tikait speak of their unwavering in their resolve to continue the movement till the BJP-led Centre yielded.

“I talked personally to farmers from Rajasthan, Madhya Pradesh and Haryana… everyone said just one thing, that they were ready for a fight to the finish. An 80-year-old farmer did not leave the protest site even when the temperature was 2 degrees outside,” he said.

He said it was “glorious”, to see 1,000 women driving tractors for a rally to Delhi.

“A thousand women were taking training to drive the tractors. Within two or three hours of effort, many managed to get the vehicles moving,” he said.

Bhaktaram Pan, a former CPM MLA from Chanditala and central committee member of the Kisan Sabha who led the team of the farmers to Delhi, said the movement sent a firm message to Modi that the farmers would not allow themselves to get divided over faith, caste or language.

“Despite the BJP government always playing divisive politics, in the case of the farmers’ movement, the protests showed that their only religion was agriculture. The unity of the farmers brought the victory,” he said.

Bengal witnessed two major farmers’ movements in Singur and Nandigram against the setting up of industries on farm land, against the will of the farmers during the Left regime.

On Friday, the All India Kisan Sabha organised victory rallies in around 700 places across Bengal, and convened a farmers’ meeting in each block on November 26.

“Today (Friday), it was the spontaneous reaction from the farmers of Bengal, who arranged the 700 rallies to celebrate the victory of protesting farmers. We will conduct a block-wise rally with farmers across the state, in a week from now,” said Amal Haldar, state secretary of the All India Kisan Sabha.

Former CPM MLA Sujan Chakraborty led a rally in Uchhepota in South 24-Parganas. The Left’s students wing SFI (Bengal unit) also took out a rally from its Calcutta headquarters to celebrate the victory.

Several other platforms, such as the Bangla Sanskriti Mancha also celebrated Modi’s announcement of repealing the farm laws on Friday.