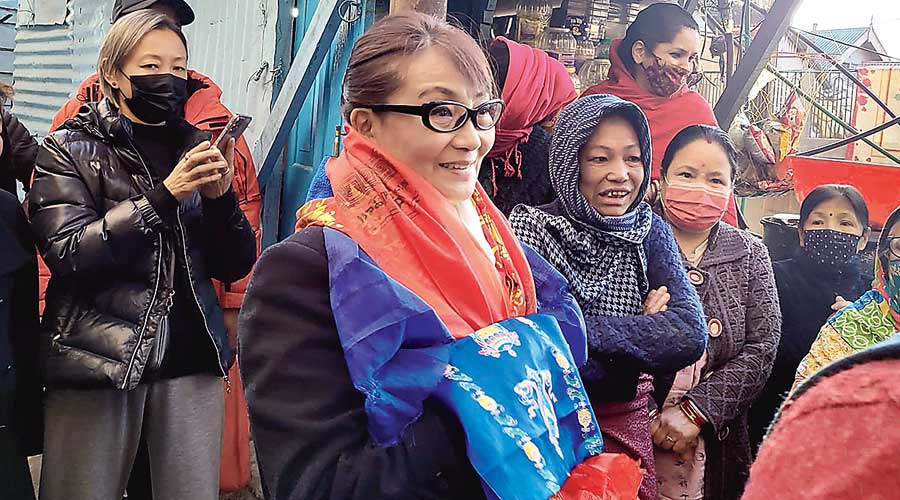 Pemila Bhutia, a candidate of the Hamro Party in ward 16 of Darjeeling municipality, during her campaign
Telegraph Picture
Vivek Chhetri   |   Darjeeling   |   Published 17.02.22, 12:50 AM

Woman power is on display in the run-up to the February 27 Darjeeling municipality poll.

As many as 71 women candidates are contesting the 32-ward Darjeeling civic election. During the last civic elections in 2017, the number of women contestants was 46.

Most of the hill parties have given a fair share of female representatives with the Gorkha National Liberation Front (GNLF) leading the way. Out of the 24 seats that GNLF is contesting, the party has fielded 17 women candidates.

The GNLF is followed by the Hamro Party, which has 18 women among on its list of 32 candidates. The Bharatiya Gorkha Prajatrantrik Morcha (BGPM) has also fielded 15 candidates.

“The participation of women candidates, especially in the urban elections in the hills, has been encouraging of late. The trend actually started with the formation of the Gorkha Janmukti Morcha in 2007,” said a political analyst from Darjeeling.

One of the strongest wings of the Bimal Gurung party was the Gorkha Janmukti Nari Morcha.

“In the past, too, the GNLF which was in power had a relatively strong women’s wing but the participation of women in politics became very high after the Morcha was formed in 2007,” the analyst said.

Ajoy Edwards, the president of the newly formed Hamro Party, said they had made a conscious decision to provide party tickets to women.

“We thought about this issue a lot and made a conscious decision to provide tickets to women. Women play a great role in a family and we are working on the idea of Darjeeling being one big family.”

Renu Pradhan, a first-time woman contestant, said that her family was very supportive of her decision to be in the electoral fray. “I decided to contest the elections to make a meaningful impact for a better society. My entire family is supportive of my decision,” said Pradhan, a contestant of the Hamro Party.

While the women's representation in Darjeeling this year is 47.97 per cent and is almost proportionate to the female population, the same cannot be said in other elections across India.

According to the 2011 Census, women constitute 48.5 per cent of the country’s population but their political participation continues to be low in all tiers of democratic institutions.