20 injured as lawyers and civic staff clash in Calcutta's Howrah 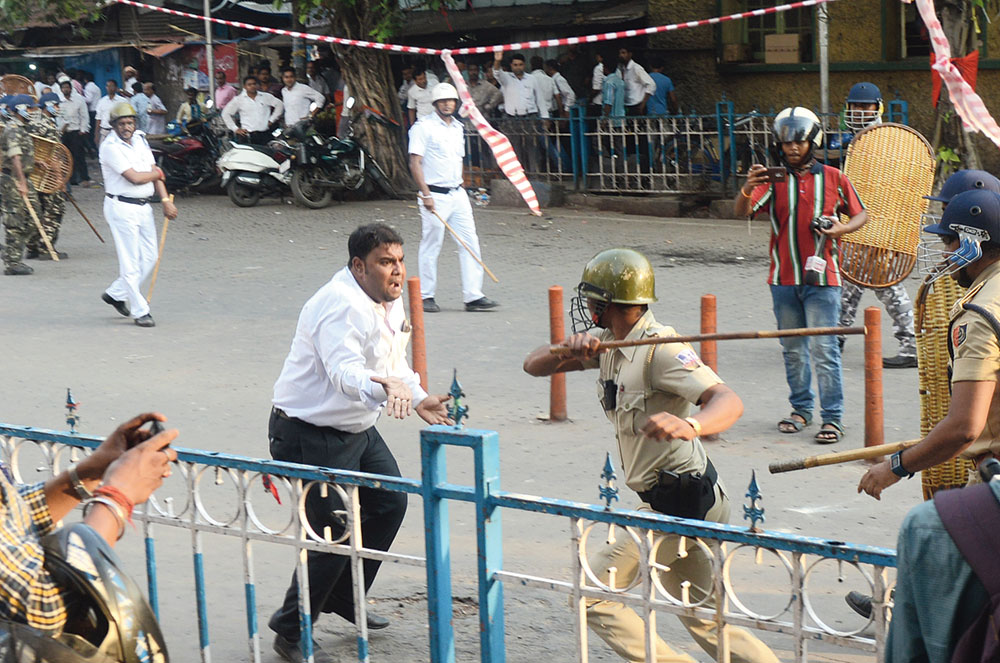 Police lathi charges a lawyer during a clash between lawyers and employees of the Howrah Municipal Corporation on Wednesday. Pictures by Bishwarup Dutta
Picture by Bishwarup Dutta
Kinsuk Basu   |   Calcutta   |   Published 24.04.19, 09:38 PM

Lawyers and staff of the Howrah district court and employees of the Howrah Municipal Corporation (HMC) fought a pitched battle for hours on Wednesday over parking of vehicles at the civic headquarters.

At least 20 people were injured after being hit by flying stones and police batons during the clash on Mahatma Gandhi Road. Four of them — civic employees Ranjib Halder and Ashish Dinda and lawyers Sujan Bhakt and S. Chakrabarty — have been admitted to hospital with head injuries.

The court did not function for most of the day. At the corporation, employees who were stuck inside were trying to figure out how to leave as all the gates were locked.

Vehicles were not allowed on some of the roads leading to the court and the civic office from well before noon, forcing many to walk long stretches and others to take a detour.

Traffic crawled on some of the major arteries, such as Howrah Station Road, Salkia Road and Foreshore Road, till late in the evening. Schoolchildren had to walk down Bankim Setu in the afternoon sun as violence raged on the road below.

The warring sides have threatened to continue with their agitation on Thursday. Police have started two cases based on a complaint and a counter-complaint.

The police said an altercation between an elderly lawyer and a man guarding a gate of the civic headquarters around 10.30am triggered the fight. The situation became normal around 8.30pm.

Tensions flared once again around 5pm after word spread that the lawyers would not allow the HMC staff to step out. Stones started landing from inside HMC compound on the road. The lawyers ran away but soon regrouped and retaliated with bricks.

Within a few minutes, police and RAF resorted to lathicharge. Led by senior officers, cops entered the court premises, beat up lawyers and secretarial staff and threw away tables and chairs before firing tear gas shells.

“I had gone to fetch my daughter who got trapped inside the HMC office. The police spotted me entering the court and beat me up mercilessly,” alleged Bikash Maity, a secretarial employee of the Howrah court.

The cops finally cleared the road, following which the HMC gates were opened and the staff gradually moved out.

“We have started two separate cases. We will not give further details now,” said V.R.S. Ananthnag, deputy commissioner, south division.

“Many of us park our vehicles in the HMC compound. This has been the practice for almost 30 years,” said Samir Basu Roy Chaudhury, the president of the criminal court bar library at Howrah.

“The guard could have been at least respectful to our colleague. The way the corporation staff attacked us was unbelievable. I had a close shave.”

A number of civic employees allegedly attacked the lawyers with sticks and rods. The lawyers are said to have retaliated by pelting the civic staff with stones. Many two-wheelers parked on the HMC premises were damaged.

“The lawyers wouldn’t stop. They found me on their way to the office and beat me up,” said Debasish Panja, an HMC employee.

Police initially struggled to control the situation, prompting the authorities to send a bigger contingent.

Howrah MLA and minister Arup Roy reached the spot and tried to pacify the warring groups but he was booed out.

The Howrah Municipal Corporation compound doubles as a free parking ground for many, who enter the premises on some pretext and keep their vehicles parked for hours. For some time, civic officials have been trying to end the practice.

Notice boards have been put up at all gates to make outsiders aware that only civic employees are allowed to park on the premises.

Since Wednesday morning, witnesses said, guards at the three gates of the HMC had been preventing outsiders from entering the compound with vehicles.

“Around 10.15am, a guard chased away an e-rickshaw driver who tried park the vehicle on the HMC premises,” said Sukhachand Singh, a trader who runs a shop at the nearby Sanhati Market.

“Around 10.30am, the guard stopped an elderly lawyer from entering the compound on his motorbike. After an exchange of words, I saw other lawyers coming out of the court and running into the HMC compound.”

A number of employees of the HMC’s conservancy department alleged that they had been attacked by a group of lawyers.

The lawyers, on the other hand, alleged that the civic guard had insulted their elderly colleague.