The elephants are suspected to have come out of the Baikunthapur forest, around 20km away from the town; cops & foresters monitor movement 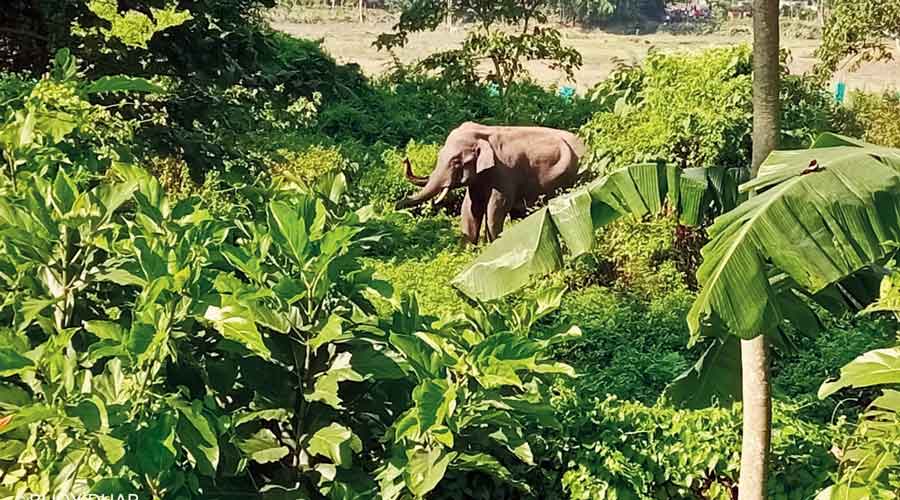 A unique drama unfolded in Jalpaiguri town early on Sunday  morning as two wild elephants   walked inside the town and strayed into different localities.

This is the first time in recent years that wild elephants have been sighted in the town, which has the Baikunthapur forest in its fringes.

As the news spread, thousands of curious residents hit the streets to catch a glimpse of the wild elephants, making it tough for foresters and the police to steer the animals back to the forest.

Till late Sunday evening, both the elephants were seen standing in a graveyard located in Pabitranagar Colony on the bank of the Karala river that flows through the town.

Foresters and police officials are on the spot and monitoring their movement.

The elephants are suspected to have come out of the Baikunthapur forest, around 20km away from the town.

“It seems they have walked along the right banks of the Teesta river and reached the town,” said a forest official.

Around 3am, some policemen posted at the Biswa Bangla Krirangan, a sports complex-turned-Covid hospital, and some bystanders first spotted the wild elephants strolling on the road. Soon, this information was passed to Kotwali police who in turn informed foresters. The foresters also called up the wildlife squad posted at Ramsai near Maynaguri.

A search was launched to locate the wild elephants.

The elephants stayed near the hospital for some time and then retreated. They crossed the Karala river again and entered a graveyard. Finding bushes and plants there, they started munching on them..

By afternoon, as more and more people started coming to this spot as well, foresters and police officers decided to wait till dusk.

“We have to steer the elephants back to the forest which is some 20kmaway. If we do it during the day, there is always the risk of injury or casualty as thousands of people live along the route. We are keeping watch on the movement of the wild elephants,” said Mridul Kumar, divisional forest officer of Jalpaiguri division.

With the crowd swelling by the minute, policemen were deputed in adjoining areas. Also, entry of people was restricted to a distance of 300 metres from the graveyard. By afternoon, the administration had issued prohibitory orders at the site. Policemen even had to wield batons and chase people who swarmed in front of Ananda Chandra College,  near the graveyard, for a peek at the elephants.

“Nine teams of the state forest department are working together. We are making public announcements to avert any untoward incident. Residents should be alert and stay safe,” said Moumita Godara Basu, the district magistrate.

Foresters are bursting sound crackers so that the elephants start moving out of the town, said sources late on Sunday evening.

Onlookers at a ground in Jalpaiguri town near where the elephants went in the afternoon.
Photo Biplab Das

After about an hour, a team of foresters spotted the wild elephants near the private bus stand in Netajipara. Though the team tried to steer the elephants out of the town, the duo walked into the Karala river, crossed it, and reached near the super-specialty hospital in TB Hospitalpara, another locality of the town.

Later in the morning, it was found that while entering the town, the elephants had damaged the entrance of the land and land reforms department’s office of Jalpaiguri Sadar block near the BDO office.

“Initially, we felt some criminals had tried to break the gate. Later we realised that this was the handiwork of the two wild elephants who have entered our town,” Dinesh Dutta, a resident, said.

As the day rolled on, many residents hit the streets to catch a glimpse, as well as shoot pictures and videos.

“I never heard in my life that wild elephants entered our town so I didn’t want to miss the chance to see them,” said Pinaki Das, a youth cycling to reach  the super-specialty hospital.