His struggle and perseverance will inspire many, says institute’s deputy director 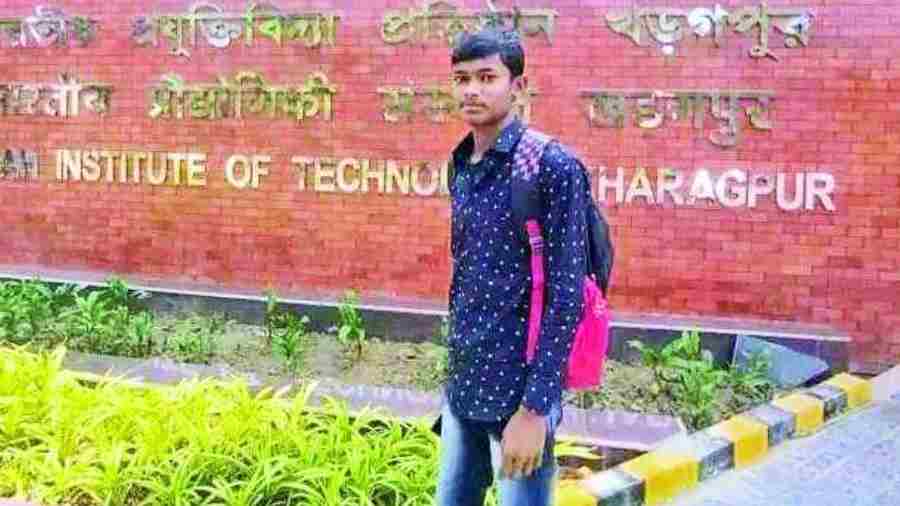 On days a young Chhoton Karmakar would climb on a bicycle and peddle father Kanai’s wares in Saltora’s villages to provide him some relief from the rigours of the job, Karmakar Sr “would not approve and ask me to focus on my studies”.

But Kanai Karmakar, 50, need not have worried. Chhoton, 18, on Friday secured admission to IIT Kharagpur, overcoming heavy odds to take a firm step towards achieving his dream of becoming an engineer.

Cracking the JEE Main and the JEE Advanced, however, had not been the last hurdle for the Bankura boy — the first-semester admission fee of Rs 1.7 lakh seemed an insurmountable obstacle when his teachers and friends were able to scratch together only around Rs 35,000.

“He was asked to deposit whatever money he had at the moment, while the institution will help him get scholarships,” an official at IIT Kharagpur said.

Amit Patra, deputy director at IIT Kharagpur, said: “We are happy to admit the boy. His struggle and perseverance will inspire many. At a time IIT aspirants go to expensive coaching institutions, this young boy has proved that merit and grit are the last word.”

Chhoton, who cleared Class XII from the Bankura Christian Collegiate School this year with a score of 479 out of 500, will do a BTech in industrial and systems engineering.

He said he had heard about the IITs only in Class XI. His elder brother Sourav said their father was still oblivious to the pre-eminence of the IITs and the difficulty of getting into them, and was therefore unable to understand the fuss around Chhoton’s achievement.

Chhoton recalled that as a boy he would watch Kanai, a primary school dropout, leave their home in Pabra on his rickety bicycle every day to sell cheap jewellery, ribbons, hair bands and cosmetics in neighbouring villages.

“Sometimes, after scorching days in the sun, my father would return home without much earnings. I could see the pain on his face,” he told The Telegraph from Kharagpur.

As he stepped into his teens, Chhoton realised his father was not keeping well. So, he decided to chip in.

“When I was in Class VIII, I began to ride my father’s bicycle and sell his stuff at least twice a week. My father would not approve and ask me to focus on my studies,” Chhoton said.

He added: “I began to dream of becoming an engineer when I was in Class IX. But I didn’t know that the IITs were the best place to study engineering. I came to know about this only in Class XI.”

Chhoton said he couldn’t have made it without help from a local coaching institute in Bankura, and his schoolteachers and friends.

“The money I needed to secure admission to an IIT was beyond my family’s capabilities. I didn’t know how to overcome the problem till a few good people pitched in,” Chhoton said.

Patra, the IIT deputy director, said: “There is a merit-cum-means scholarship for our students. The alumni association too helps. I can assure you that finances will not come in the way of the student completing his degree. I will request him to concentrate on his studies.”

Bankura district magistrate K. Radhika Aiyar said the administration would felicitate Chhoton next week and “would stand by him if he needs any support”.

Chhoton’s elder brother Sourav, 23, a surveyor with a private company in Bankura, was confident that Chhoton would get into an engineering college but had no idea about the “reputation of an IIT”.

“When my friends told me what it means to get into the IITs, I realised what Chhoton had achieved. My father cannot still understand why there is such praise for Chhoton,” Sourav said from Bankura.

Kanai has one expectation from his son: “People helped him fulfil his dream, he should stand by the poor in the same way.”

Chhoton says he will not let his father down. But his first objective is to earn enough to make sure that Kanai doesn’t need to hop on his bicycle any more to sell his wares in the villages of Saltora.