The agitators demanded that the order be withdrawn by tonight, failing which, they would collectively decide on their future course of action 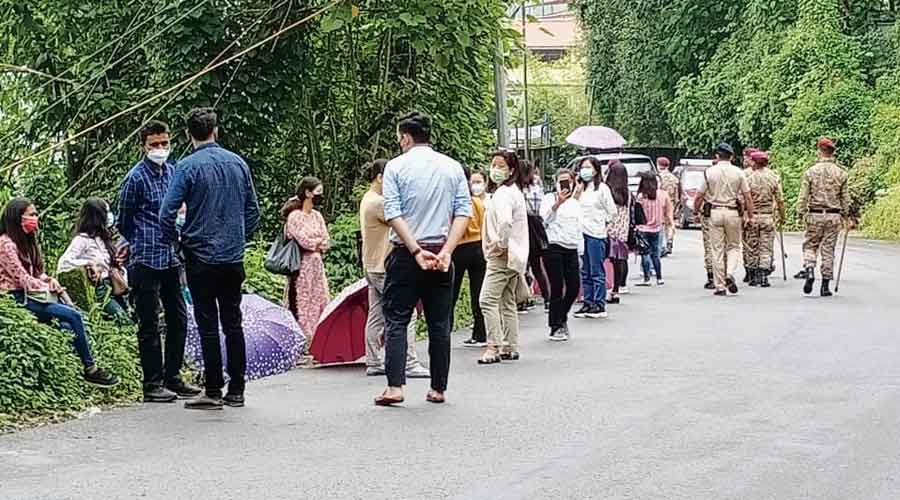 A sizable number of 800-odd ad hoc schoolteachers who had been appointed last year gathered in front of the Tashiling Secretariat in Gangtok on Monday to protest against the decision of the Sikkim government to hold fresh interviews for them to continue in their jobs.

The agitating teachers from different parts of the state demanded that the order to hold fresh interviews that was issued on Monday be withdrawn by tonight, failing which, they would collectively decide on their future course of action within the next couple of days.

The ad hoc teachers had reached Gangtok on Monday from different parts of the state to meet education minister Kunga Nima Lepcha and air their grievances like continuation in services. Even as they were gathered at the secretariat, the state education department came out with the order announcing the holding of fresh interview.

The order prefaced that by stating: “It is has been decided that after 30.06.21, all appointments of ad hoc teachers in the education department would only be made subject to participation in walk-in interview with the appointing authority and in fulfilment of criteria as prescribed for in the NCTE Acts, its Rules and its Regulations.”

The aggrieved teachers, however, argued that they had been appointed after going through the interview process duly conducted by the education department, and it was not fair on the part of the government to ask them to sit for an interview afresh.

“This is patently unfair. How can we be asked to sit for an interview all over again after being in the job for almost a year?” asked a teacher who, like others The Telegraph spoke to, requested anonymity.

The teachers said the government instead should be facilitating the continuity of their services, given that its own policy was to regularise the services of those temporary teachers who completed eight years in service.

“If at all the government wants to conduct fresh interviews, it should be for all ad hoc teachers not just for our batch,” said another teacher.

The teachers alleged attempts were made by the administration to thwart them from reaching Gangtok from different parts of the state. “We had come to meet the education minister with our grievances, but neither he nor his senior officers were present at the secretariat. On the way to Gangtok, many of us were asked by the cops if we were ad hoc teachers,” said a teacher.

Four of their representatives eventually had to settle for a meeting with the director of education, who, they said, promised to forward their grievances to the higher authorities. “We are hopeful the government will respond positively to our demand. Till such time, we will remain in Gangtok and decide on our next course of action accordingly,” said a teacher.