Pravin Sharma, a spokesman for the students, said they would stay put in Gangtok till such time that they got a satisfactory response 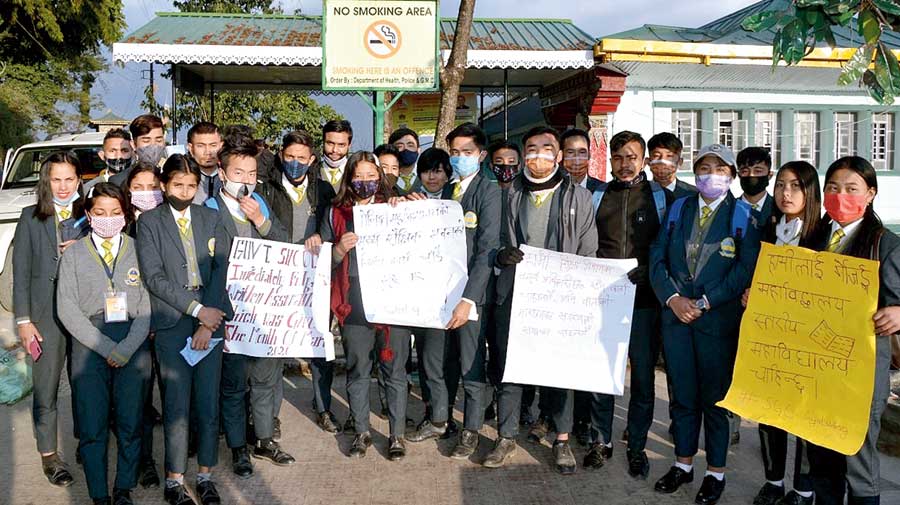 Students of Sikkim Government College at Gyalshing in West district gathered in silent protest in front of the state human resources development department (HRDD) office in Gangtok on Wednesday to demand early completion of all infrastructure work, including the construction of the academic building.

About 35 students of the college had reached Gangtok, which is about 120km from Gyalshing, the district headquarters of West Sikkim, on Tuesday to meet senior officials of the education department, including minister in-charge Kunga Nima Lepcha, and put forth their demand. They could meet G. P. Upadhyaya, additional chief secretary and head of the education department, but were not satisfied with the outcome.

The students said they wanted to meet the education minister and get an answer from the government for the delay and a definitive assurance on early completion of work.

“Last March, the government had given us a written assurance to complete at least the academic building within three months. The ACS (Upadhyaya) told us yesterday that the delay was because of the Covid-19 pandemic. Even making allowance for the Covid-induced delay of five months, the building should have been ready by now. The fact, though, is only 50 per cent of the work has been completed,” Pravin Sharma, a spokesman for the students, told The Telegraph.

Sharma said the students would stay put in Gangtok till such time that they got a satisfactory response.

“We are only seeking 20 minutes of dialogue to know for ourselves the reasons for the delay and get an assurance on the speedy completion of all infrastructure work. We will remain here and decide on our next course of action depending on how the situation pans out,” he added.

“All infrastructure work of the college was originally scheduled to be completed by 2015, but the sorry fact is not even half of the work has not been done,” said another student.

The Telegraph tried reaching out to the education minister, but repeated calls to him went unanswered.