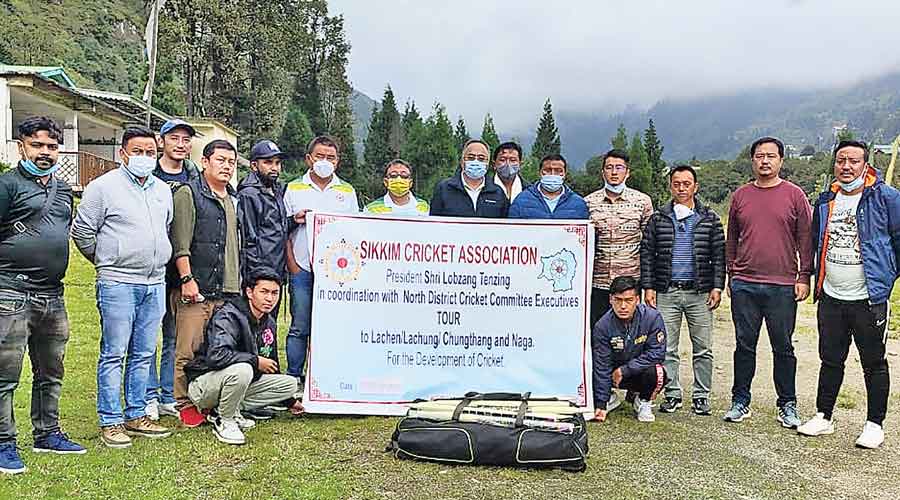 Members of the Sikkim Cricket Association at Lachung in North Sikkim during their outreach programme.
The Telegraph
Rajeev Ravidas   |   Siliguri   |   Published 10.09.21, 12:53 AM

The Sikkim Cricket Association (SiCA) recently conducted a two-day outreach programme, “Cricket at your doorsteps”, at Lachen, Lachung, Chungthang and Naga in North Sikkim as part of its continuing efforts to spread the sport in every nook and cranny of the state.

As part of the outreach programme, SiCA officials under the leadership of its president Lobzang G. Tenzing distributed cricket equipment like nets and kits and also reached out to the parents to educate them on the opportunities available in the sport. “The tour was geared towards reaching out to the remote regions of the state with the intention of setting up cricket facilities like nets and concrete pitches…,” said a SiCA release.

The latest initiative comes in the wake of earlier programmes like talent hunt, cricket mela and cricket camps. A twomonth long camp is currently going on in Mangan, the district headquarters of North Sikkim. “About 50 youngsters have been attending the camp. Besides the coaching, they are also being provided with breakfast,” said Rinzing Namgyal, the president of the North District Cricket Committee.

SiCA officials said cricket was catching up in the highlands of North Sikkim where elevation ranges from 3,136 feet (Mangan) to 9,600 feet (Lachung) even though the weather conditions with almost fourmonth long monsoon and equal months of harsh winter limit playing season. “We try and organise indoor camps in school halls during rains,” said Namgyal.

The district has no dedicated cricket field and the players make do with football grounds and any available open spaces to play the sport. “I feel the youngsters today are more interested in cricket because they are aware of the opportunities available in the sports not just as players but also as officials and coaches,” said Namgyal.

Royal North Brothers and Black Caps Lachung are the only two teams from the district, which has a population of less than 50,000, currently playing in the A Division tournament being conducted by SiCA. “The outreach programme covered the four hubs of North Sikkim where there are signs of growth in cricket activity in the past year,” said the SiCA release.