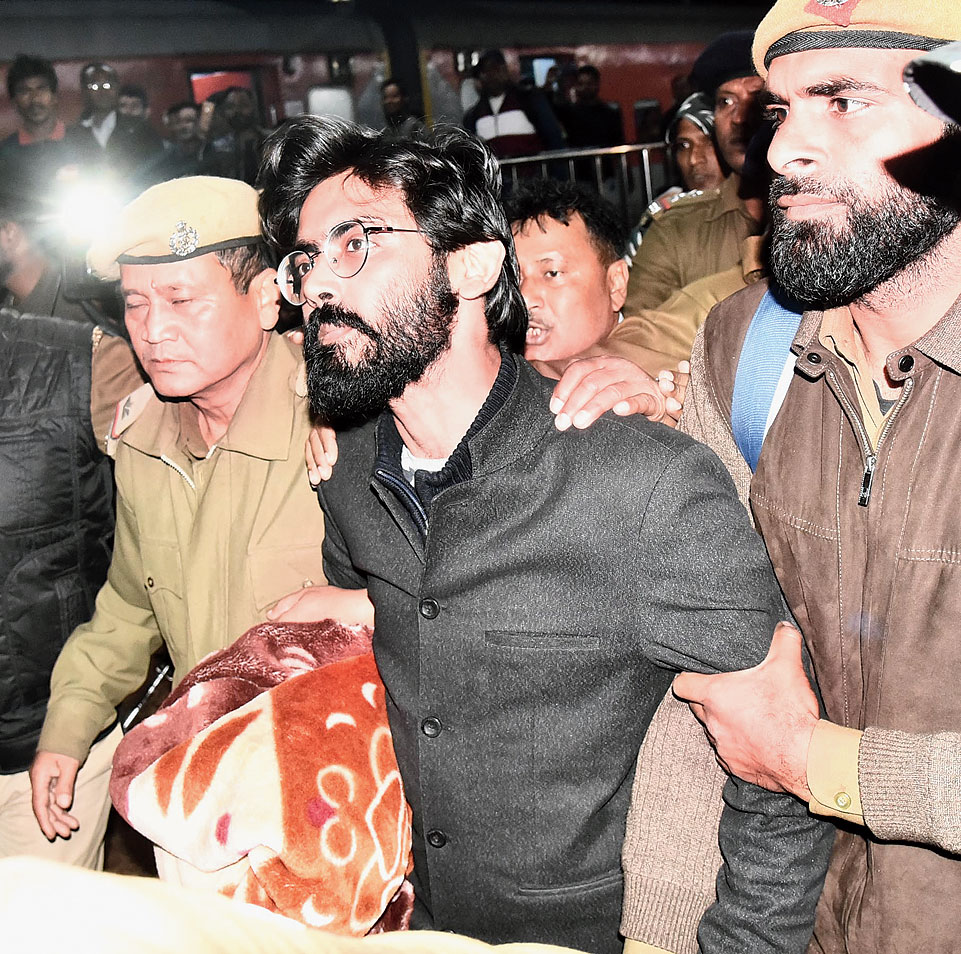 Imam had been arrested by Delhi police from Bihar’s Jehanabad on January 28 for his alleged seditious “cut off Assam from rest of India” speech in New Delhi. He was brought to the city on February 20 and initially remanded in Assam police crime branch custody for four days. The court extended his police custody for four more days on Monday. “After the crime branch custody ended today, he was produced before the CJM court which sent him to judicial custody. He will be lodged in Guwahati Central Jail,” Guwahati police commissioner M.P. Gupta said.

Sharjeel was sent to the central jail a day before Krishak Mukti Sangram Samiti leader Akhil Gogoi and three others will launch an indefinite fast from March 1.

Sources said Arunachal Pradesh police, who had followed their Assam counterparts in filing a case against Sharjeel, may also seek his remand. “Unless no other state police want his custody, he will be lodged here,” a crime branch source said.

When Imam was being taken to jail, a horde of protesters, gathered in front of the court, shouted slogans like “Sharjeel murdabad”. The police hurriedly took him away from the crowd. A similar situation had been witnessed at the Guwahati railway station the day Imam was brought to the city.

The crime branch is believed to have unearthed vital information from Imam during interrogation. “It was found that he was in touch with several people in the state since 2016. His bank accounts, call records were also examined,” a source said.

He was also found to have met AIUDF leader Badruddin Ajmal and others from the state in Delhi. “ It was found during the meeting, the student leader took stock of the situation of the minority people in the state in the aftermath of the National Register of Citizens update,” a source said, adding that he was also in touch with a Guwahati-based educationist from the state.

The police are also looking into the details of his “online” connection with members of the radical Islamist outfit Popular Front of India (PFI)’s Assam unit. Following the violence during the anti-CAA protests in the city on December 11 and 12, state finance minister Himanta Biswa Sarma had said that there was evidence of PFI members trying to storm and set ablaze the state secretariat on December 12 by posing as anti-CAA protesters.

The PFI is suspected of funding the recent spate of violence during the ongoing protests against the CAA in the country. The police had arrested state PFI leaders for allegedly conspiring, planning and facilitating violence in Assam during the protest.