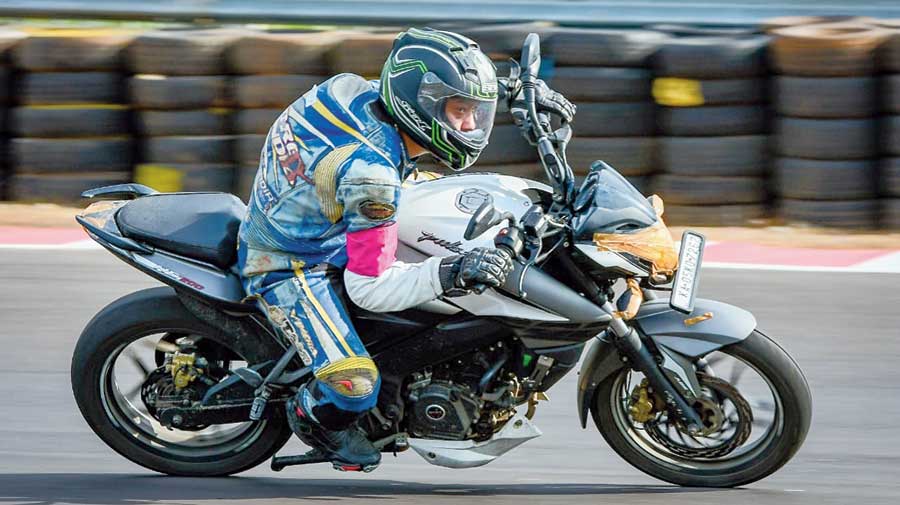 Mrishal Rana, a 22-year-old youth from Darjeeling, put the hills on the motorcycle racing map of the country by taking part in the Indian National Motorcycle Racing Championship 2020 at the Madras Motor Race Track in Chennai on Thursday.

Mrishal is the first from the hills to feature in a motorcycle event at the national level and second from the region after Pranesh Dahal of Sikkim. He is part of the six-member Team Sparks that is participating in the “Stoke 165 cc category” of the championship.

Mrishal, who is the son of the popular Darjeeling-based cop-cum-rocker M.C. Rana, is relatively new to the sport, having taken to it only last year. “I did my Level-1 training at an academy in Chennai, and Levels 2 and 3 from Coimbatore. Even though I have been biking for the past six-seven years, I took motorcycling as a sport only in 2019,” he told The Telegraph over phone from Chennai.

An alumnus of St Joseph’s School, North Point, in Darjeeling and Bhawanipur Education Society College, Calcutta, Mrishal said he was fascinated by speed, but was conscious of not over-speeding on the streets so as not to endanger the lives of others.

“I wanted to ride fast, but not on the streets. Which is why I started looking for a place where I could learn and ride fast and ended up in the racing academy,” he said.

The rookie said he wanted to attain greater heights in the racing and do his hometown Darjeeling proud.

“I spoke to Pranesh (the racer from Sikkim) only recently and we talked about setting up our own team from the region like they have from Mizoram. Let’s see how it goes,” said Mrishal, whose motorcycling heroes are the legendary Valentino Rossi and India’s fastest biker Rajini Krishnan.

Pema Thendup Bhutia and Ganesh Bhujel, two sport climbers from Sikkim, have been selected to represent India in the Asian Beach Games 2020 that will be held in China in April next.

Pema, 25, who is from Barapathing in East Sikkim, and Ganesh, 26, from Daramdim in West Sikkim, were selected on the basis of their performances at the national sport climbing meet held in January.

The duo have participated in international events in France, Switzerland and Indonesia.

The Asian Beach Games is a multi-sport event conducted every four years by the Olympic Council of Asia (OCA).